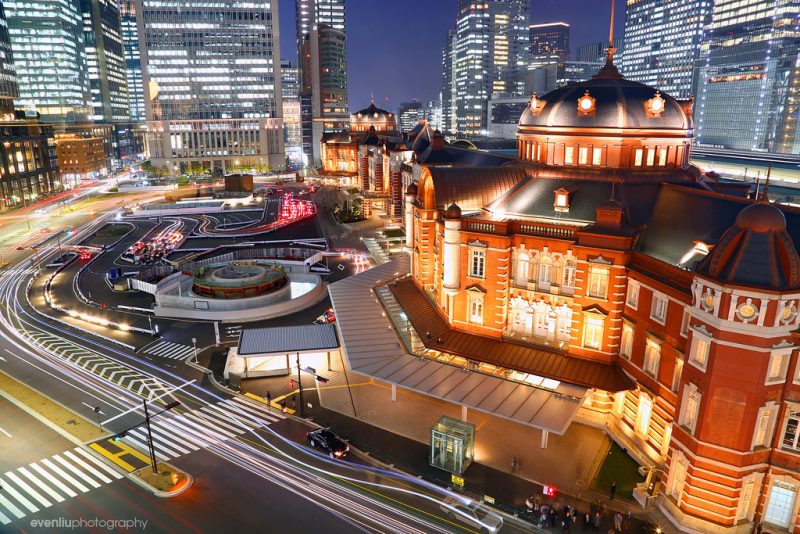 Tokyo Station is the largest and busiest train terminal in Japan. More than 3,000 trains depart the station each day, providing transportation for over 400,000 passengers. It is located in the Marunouchi business district, not far from the Imperial Palace. During the Edo Period, this area was located within the outer moats of the castle.

Tokyo itself is a bustling metropolis, often the first part of Japan that international travelers experience. Learning how to utilize Tokyo Station as a transportation hub will help make your vacation enjoyable and worry-free.

Many of the trains serving Tokyo Station are fully covered by the Japan Rail Pass. This makes travel in, around, and through this major metropolis both easy and affordable.

Located on the eastern or Yaesu side of the station, Shinkansen bullet trains are your ticket for rapid travel. Several major Shinkansen lines are served by Tokyo Station, including:

The Yamanote Loop Line stops at many of the important tourist attractions in Tokyo. Other lines include:

As mentioned, the Narita Express is the most convenient transfer between Tokyo Station and Narita International Airport, which hosts most of the overseas flights to Japan.

This limited express train service is fast, reliable and punctual, and you can ride it for free with your Japan Rail Pass.

The Tokyo Monorail does not directly serve Tokyo Station, but it can be reached by taking either the Yamanote or Keihin-Tohoku lines from Tokyo Station to Hamamatsucho Station.

There, you can transfer to the Tokyo Monorail to Haneda Airport. The entire trip takes about 25 minutes and is included in your JR Pass.

The Tokyo Metro offers local train service on the Marunouchi Line, with connections to Ginza and Shinjuku Station.

How to get to Tokyo Station

More than ten ticket gates serve as the entrances and exits to the station. Those to the east are called Yaesu, those to the west, Marunouchi. Access to the Shinkansen trains is on the Yaesu side.

Several other train stations of the Yamanote Line are located within walking distance of Tokyo Station. Buses are also available.

Things to do in and around Tokyo Station

Within Tokyo Station, you will find a JR hotel, an art gallery, the Daimaru Department Store, numerous restaurants and the new Japan Rail Café. In Marunouchi, directly west of the station, many of the skyscrapers contain shopping complexes and restaurants in their lower levels.

These include the Marubiru or Marunouchi Building, the Shin Marubiru, Kitte (which is translated “postal stamp”), Marunouchi Oazo, Nakadori Avenue, Marunouchi Brick Square, and Tokyo Building Tokia. Additional hotels are accessible from the station’s eastern side.

A five-minute walk from Tokyo Station is the Tokyo Imperial Palace, the current residents of the imperial family. The East Gardens are open to the public, and some of the inner grounds can be viewed on guided tours. Other attractions include the Mitsubishi Ichigokan Museum, originally built by the Mitsubishi Company in 1894, and the Tokyo International Forum, an event venue, and architectural highlight.

What must-see places will you visit in Tokyo? With your JR Pass in hand, your Japan vacation is sure to become a treasured memory.