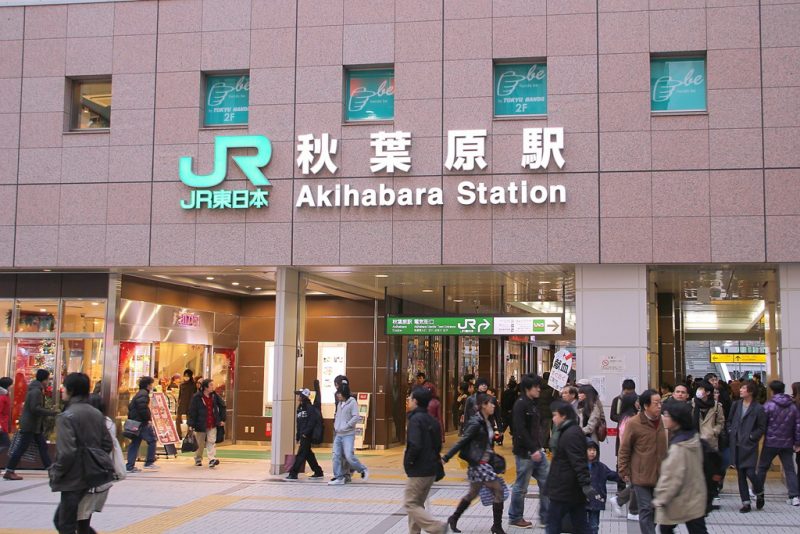 Akihabara Station is located in the Chiyoda ward of Tokyo. The area is known as a lively shopping district, with many stores specializing in electronics and otaku, the diehard anime and manga fandom. Akihabara was named for the Akiba, a local shrine formerly found there. Akiba was the god of fire, and Akihabara means “autumn leaf field.”

The modern Akihabara Station has a long history. It was originally opened in 1890, then used for hauling freight. Passengers began using the station in 1925. Today, it serves nearly 250,000 boarding passengers daily.

What do you need to know to get the most out of your experience in Akihabara? The following guide examines the train lines of Akihabara Station, access and station layout, as well as unique and interesting things to do around the station.

Your Japan Rail Pass makes rail travel around the country easy and affordable. From Akihabara Station, there are numerous train and subway lines you can take using the JR Pass.

The Tohoku Shinkansen line runs parallel to some of the station’s other lines but does not stop at Akihabara Station. To access the shinkansen, take the Yamanote Line to Tokyo Station or Ueno Station.

Remember that at the JR office, you will be able to activate your Japan Rail Pass and make your seat reservations.

Other train and subway lines

The following lines are not covered using the JR Pass:

How to get to Akihabara

Akihabara station is uniquely shaped like an “X.” The Chuo-Sobu Line runs east to west, while the Yamanote and Keihin Tohoku Lines run north to south. Two side platforms serve the former on the fourth floor, and two island platforms serve the latter on the second floor. The Tokyo Metro and Tsukuba Express can be accessed on the underground level.

Transit can also be acquired at the station’s bus terminal, which serves both route and highway buses as well as taxis. Direct buses are available to Tokyo Disneyland and Haneda Airport. Highway buses run to Osaka, Kyoto, and more destinations in the Kansai region and the Gunma, Yamagata and Iwate precfectures. Also, coin lockers for luggage are available near the Central and Showa-dori Gates.

Things to do in Akihabara

Located to the north and west of the station is the Akihabara Electric Town, a shopping district famous for its many electronics shops. Shops range in size from tiny stalls selling specific computer components to large global retailers. Popular stores include Yodobashi Camera, Sofmap, Laox, and the Akihabara Crossfield business complex. Some stores offer international tourists a tax-free shopping experience. The district’s main street, the Chuo Dori, is closed to vehicles on Sundays to allow for increased pedestrian traffic.

Akihabara is also known as the center of otaku culture, and as such, many manga and anime-themed shops can be found within the shopping district. Video game and card game shops are also popular. Internet manga cafes and maid cafes – restaurants in which the waitresses dress and act as anime characters – attract many diehard fans. The purpose of such shops is to “create an atmosphere as close as possible to the game and anime worlds.” Cosplayers – fans in costume – can be seen on the streets, often advertising businesses or handing out flyers.

The area is also home to a theater run by the musical group AKB48, whose name is derived from that of the district. In fact, the trains of the Metropolitan Intercity Railway play a song by the group upon the train’s departure. Special events, such as anime conventions, are frequently held in Akihabara.

Finally, you can also visit Kansa Shrine, which dates back to the year 730, although it has been rebuilt several times due to earthquakes and fires. A funny fact is that this shrine sells talismans to protect the electronic devices of the Akihabara regulars. Kanda Matsuri, one of the major Shinto festivals in Tokyo, is also held around May 15th of every odd year.

Where will your travels in Japan take you? With your JR Pass in hand, your Tokyo vacation in and around Akihabara is sure to be unforgettable.