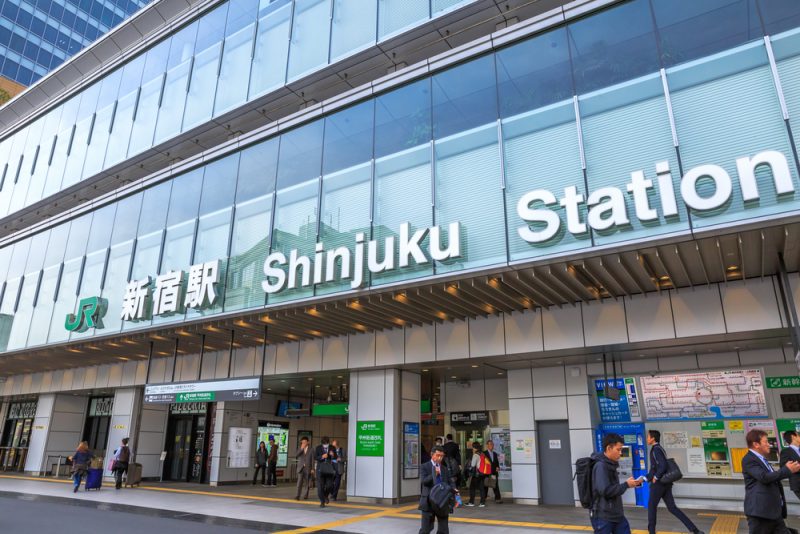 Shinjuku is one of the 23 wards of Tokyo, and it is home to a large shopping and entertainment district surrounding Shinjuku Station. Shinjuku is the busiest rail station in the world, with more than two million passengers gracing its corridors each day.

Shinjuku is a station with a long history. It first opened in 1885 on what is now the Yamanote line. Additional lines brought an influx of commuter traffic, urging the city’s growth.

The area has also become a hive of popular culture. Landmarks in the area, including the station itself, have featured in the 2003 film Lost in Translation, the Digimon Adventure childrens’ animation franchise, and in a Carl Randall painting now on display at the National Portrait Gallery in London, England.

Your Japan Rail Pass makes travel in and around Tokyo simple and affordable. The following trains are available at Shinjuku Station.

There are no Shinkansen terminals at Shinjuku Station. However, you may take the Yamanote Line to either Tokyo Station or Shinagawa Station to use the Shinkansen bullet train.

The Japan Railway lines at Shinjuku Station include:

Shinjuku Station has over 200 exits and 51 platforms. The station’s JR lines are located on eight ground level island platforms. These platforms are connected by two underground and two overhead concourses.

The Odakyu station is located beneath its namesake department store, as is the Keio station. Other non-JR lines are also located in this subterranean area.

In addition to being a busy train station, Shinjuku is home to a large bus terminal as well. The Busta Shinjuku is located atop the train station, serving long-distance highway buses and local buses. A JR Highway Bus Terminal can be found at the station’s New South Gates.

You may wonder: does Shinjuku station have lockers? Yes, coin-operated lockers for storing your luggage are locked near most stairwells, escalators, and exits.

Things to do in and around Shinjuku Station

To the west of Shinjuku Station is the “Skyscraper District,” the location of many of the city’s tallest buildings. The JR Shinjuku Hotel, as well as other elite hotels, can be found there, and the observation decks of the Metropolitan Government Office are open to the public.

Shopping malls and department stores surround the station on all sides, including the century-old Isetan, the Takashimaya Times Square complex, and the multiple floors of the Odakyu, Keio, Lumine, and Mylord department stores. Many stores, such as Lumine, Yodobashi Camera, and Bic Camera, are located immediately outside the station’s exits.

The so-called “red light district” of Kabukicho lies to the north of the station. The Kabukicho’s Golden Gai is home to more than 200 small restaurants and bars, and the Omoide Yokocho, translated “memory lane,” is a network of alleyways housing dozens of tiny ramen, sushi, and yakitori eateries.

A number of parks are within walking distance of Shinjuku Station, including the Skyscraper District’s Central Park, and the Shinjuku Gyoen to the south. The Shinjuku Gyoen was formerly a garden of the Imperial family, but since 1949 it has been a favorite public cherry blossom spot.

Where will your Tokyo travels take you? With your JR Pass in hand, you are equipped to explore this thriving neon city.