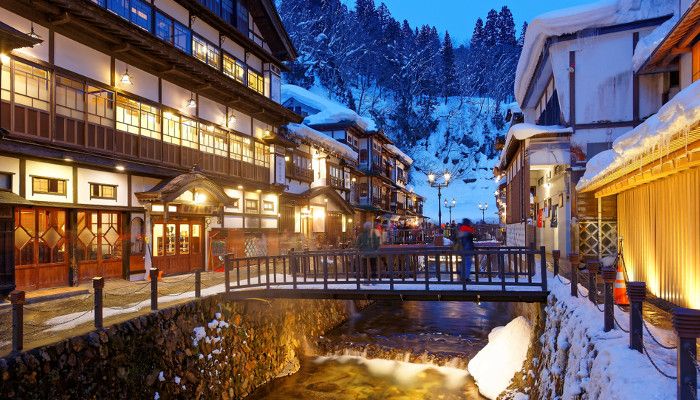 The city of Yamagata, capital of the eponymous Yamagata Prefecture, is one of Japan’s premier winter destinations. Surrounded by snowy mountains and natural beauty, Yamagata city is the perfect base to visit the ski slopes, hot springs, national parks, and historic monuments that fill the region.

Located in the north of Honshu (the largest of the islands that make up Japan), Yamagata forms part of the Tōhoku region. It is known for being a hub of winter sports centered around Mount Zao. It is also home to one of the National Treasures of Japan: the Five-storey Gojuto Pagoda of Mount Haguro.

This guide to Yamagata tells you everything you need to know about the greatest tourist attractions and things to do in both the city and the surrounding region, as well as how to get there on the Shinkansen trains with a JR Pass.

How to get to Yamagata from Tokyo

The easiest way to get from Tokyo to Yamagata is to take the famous Shinkansen, or bullet train.

Holders of the Japan Rail Pass (JR Pass) can use it to board the Tohoku Shinkansen line at Tokyo station.

There are various stations in the Yamagata Prefecture along the Yamagata Shinkansen line. JR Pass holders can get off at Yamagata Station to visit the city itself or continue all the way to Shinjo.

The journey from Tokyo to Yamagata City takes around 2 hours and 45 minutes on the Yamagata Shinkansen line.

What to do in Yamagata City

There are plenty of reasons to visit Yamagata City itself. It might not be the most well-known place in Japan, but Yamagata has various noteworthy landmarks to visit and events to experience. These highlights make it well worth making a stop here while touring the country with a JR Pass.

Yamagata hosts various festivals throughout the year. The Yamagata Hanagasa Festival (5-7 August) is one of the Tōhoku region’s 4 major festivals, featuring a huge parade with 10,000 dancers.

The Yamagata International Documentary Film Festival takes place every 2 years, showcasing the achievements of the genre.

The Imoni-kai (taro potato party) is a common event in the fall, where picnic spots around the city are used to cook taro potatoes, thin-sliced meat, and vegetables in large pots.

When visiting Yamagata, you should take some time to get out of the city and explore some of the wider prefecture.

The snowy mountain resorts are perfect for lovers of winter sports.

The various spas and hot springs are the places to go if you’re looking to get some R&R.

Or, if you simply love being close to nature, take a hike through the mountains and forests that make up Yamagata’s wild side.

Things to do in Yamagata Prefecture include: