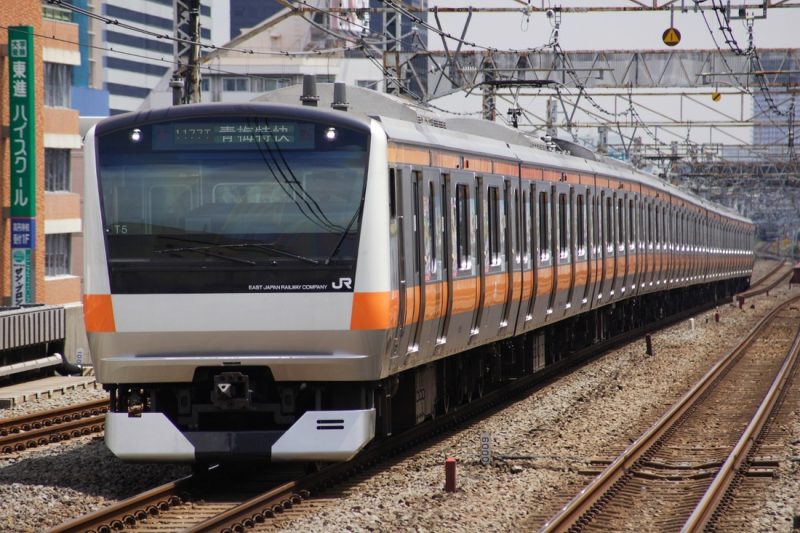 Do you have plans to visit Tokyo? If you do, you’ll likely be using Japan’s extensive commuter train system to get around. The railways in Japan are quick and efficient, as well as affordable – especially if you take advantage of the Japan Rail Pass, which fully covers it and allows to ride it for free!

When traveling in Tokyo, common train lines include the 60 kilometers that make up the Chuo-Sobu Line. This line runs east and west across Tokyo, between Chiba Station and Mitaka Station. It is the single JR line that crosses the circle of the Yamanote Line, and it serves as a major artery for local commuters as well as other travelers.

Don’t get confused! Sometimes you may see this line marked as the “Sobu-Chuo Line,” an inverse of its usual name. Don’t worry, it is the same rail line. You may have other questions about the Chuo-Sobu Line as well, and we’re here to help. Equipped with this handy guide, you’ll soon be traveling like a pro.

How the Chuo-Sobu Line works

Interestingly, the Chuo-Sobu Line is the only line that intersects the Yamanote Loop Line. The Tokyo Metro Tozai Line utilizes portions of the Chuo-Sobu Line – from Nishi-Funabashi to Tsudanuma, and from Nakano to Mitaka – during the mornings and evenings.

When choosing your train, you may notice that yellow trains are called Sobu Line, while orange trains are named Chuo line.

This distinction identifies the type of service – yellow are local trains, while the rapid trains are orange. Typically, rapid trains run on the main lines.

The Chuo-Sobu Line is primarily considered a slow-train service, meaning it stops at every station along its path (this is contrasted with rapid service, which skips stations to enable faster travel between terminal stations).

Trains do not run on the Chuo-Sobu line very early in the morning or late at night – typically, this break occurs from around 10 pm to around 6 am. At these times, local trains can be accessed on the nearby main lines. Female-only cars are available during rush hour. Announcements and signs are in both Japanese and English.

The following stations are serviced by the JR Chuo-Sobu Line (west to east):

Consider some of the interesting stations you’ll discover along the Chuo-Sobu Line.

JR East’s Ochanomizu Station lies next to the Kanda River. The Ochanomizu area is popular for its many guitar and instrument shops. One stop away is Suidobashi Station, close to Tokyo Dome and Koishikawa Korakuen, one of Tokyo’s most attractive landscape gardens and one of the best spots for the cherry-blossom viewing.

Shinjuku Station is the largest along the Chuo-Sobu Line. From Shinjuku, you can transfer to the Yamanote Line, which reaches many of Tokyo’s most popular attractions. The Narita Express and rapid trains along the main line also stop at Shinjuku.

Okubo Station can be reached only using the Chuo-Sobu Line. The Shin-Okubo district is well known for its Chinese and Korean food. The Yamanote Line can be reached in a five-minute walk from this station.

Koenji Station is located in an area known for its nightlife as well as manga, anime, otaku, and cosplay culture. The rapid trains serve this station on weekdays, but only the local trains of the Chuo-Sobu Line stop there on weekends.

The terminal station of Mitaka allows access to the Ghibli Museum, a fun excursion for all ages, featuring the creations of Japan’s famed animation studio, Studio Ghibli.