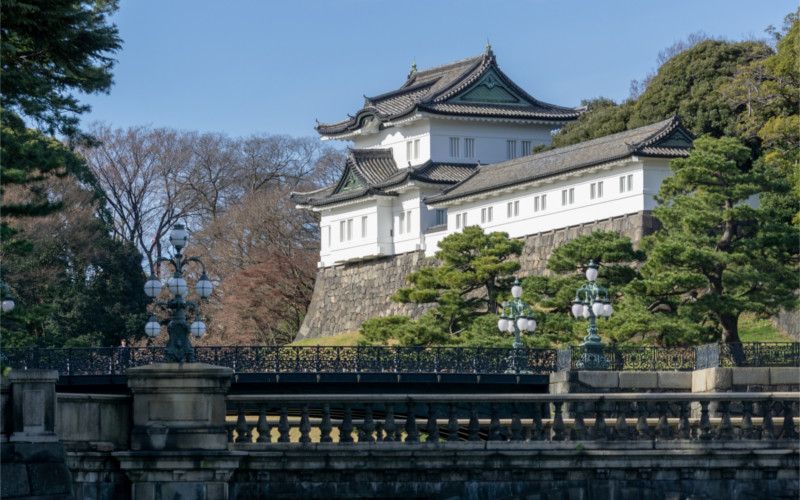 Also known as Kōkyo, this palace in Tokyo is the residence of Japan’s Imperial Family. The Imperial Place is defined by distinctive whitewashed buildings with sloping roofs in a historic Japanese style, and is surrounded by a vast, formidable moat.

Visitors to Tokyo are encouraged to take a guided tour of the extensive, elegant palace grounds. These include the Imperial Palace East Gardens, which houses the large collection of the Museum of the Imperial Collection, and Kitanomaru Park, home to the National Museum of Modern Art.

According to legend, the first emperor of Japan was a descendant of Amaterasu, the sun goddess. The same imperial family has been in power in Japan for over 1500 years.

Today, the function of the Emperor is purely symbolic. He is highly respected, present at diplomatic meetings, and crucial to a number of ceremonies, but he holds no political power. In 2019, the one hundred twenty-sixth emperor, Naruhito, was crowned. He serves alongside his wife, Empress Masako.

The location of the Imperial Palace rests on the site of an Edo era castle. Over time, many of the castle structures were damaged by fire or earthquake and subsequently replaced. During World War II, the 1888 palace was destroyed but was later rebuilt in the same style.

How to get to Tokyo’s Imperial Palace

The Imperial Palace is located in Tokyo’s Chiyoda ward, just a ten-minute walk from the JR Tokyo Station. Take the Marunouchi Central Exit and the palace grounds are directly west of the station.

Tokyo station is served by many JR lines covered by JR Pass, you can use yours to reach it by the following lines:

If you come from outside Tokyo, you can also reach Tokyo station riding a Shinkansen (since almost all shinkansen lines pass through Tokyo station) or even with the Narita Express from Narita airport. All this options are covered by the Japan Rail Pass.

Much of the Palace grounds are closed to the public. Other areas, such as the East Gardens, open at 9 am, except on Mondays, Fridays, and the New Year holidays.

Admission and tours are free. 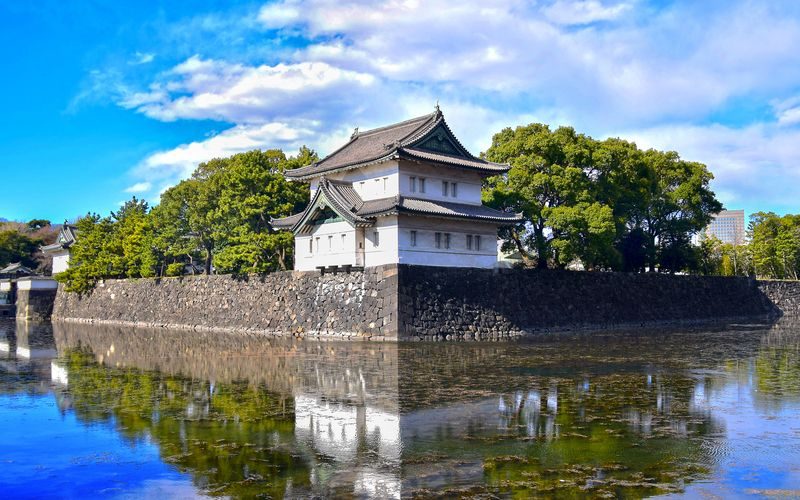 The Palace’s inner grounds are not generally open to the public. On special days each year, visitors can enter this space and witness public appearances by the Imperial Family. These dates include January 2, the New Year’s Greeting, and February 23, the Emperor’s Birthday.

The Kokyo Gaien National Garden is a large plaza located in front of the Imperial Palace. From it, Seimon Ishibashi and Nijubashi bridges, which form the entrance to the palace grounds, can be viewed. The National Gardens also house the Sakuradomon Gate and a bronze statue of the samurai Masashige Kusunoki.

Adjacent to the inner grounds are the Imperial Palace East Gardens known in Japanese as Kokyo Higashi Gyoen. The Edo era buildings no longer stand, but one can still imagine this area as the castle’s innermost circle of defense. Moats, guardhouses, and the foundation of a castle tower excite the imagination.

The East Gardens can be reached from the Otemon Gate entrance. This gate is a watari-yagura or a building used for both storage and defense. Through the gate, you can also reach the Sannomaru Shozokan, the Museum of the Imperial Collection. The collection includes nearly 10,000 pieces of art and history related to the Imperial Family, such as the calligraphy of a famous writer from the fourth century.

Kitanomaru Park is a favorite sakura viewing location in Tokyo. Boats can be rented to paddle across the moat in summer. This park is also home to the National Museum of Modern Art, the Science Museum – featuring one of the world’s largest planetariums – and the Nippon Budokan indoor arena, in which tournaments were held during the 1964 Olympics.

Guided tours of the grounds are also available. Tours last about an hour and fifteen minutes. They are held on Tuesday through Saturday at 10 am and 1:30 pm. You can make a tour reservation in advance through the Imperial Household Agency or on the day of the tour at the Kikyomon Gate. Two hundred advance registrations and 300 day-of tour spaces are available. Tours are free of charge and conducted in both Japanese and English.

Points of interest visited on the tour include the Kikyomon Gate, the Mt. Fuji-view Keep, the Lotus Moat, the Seimon Testubashi Bridge, and the Fujimitamon defense Gate. Note that none of the buildings are entered during the tours.

What to do near Tokyo’s Imperial Palace

There is plenty to do in Tokyo’s Chiyoda ward. Visit the iconic Tsukiji Outer Market, or stop in at Akihabara for electronics and otaku items. Do some shopping at Ginza, Nihonbashi, or Tokyo Dome City. Escape to the gardens of Koishikawa Korakuen and Hama Rikyu. If you’re a history buff, spend some time at the Yasukuni Shrine.

With your Japan Rail Pass in hand, Tokyo can serve as the starting point for your next Japan adventure.