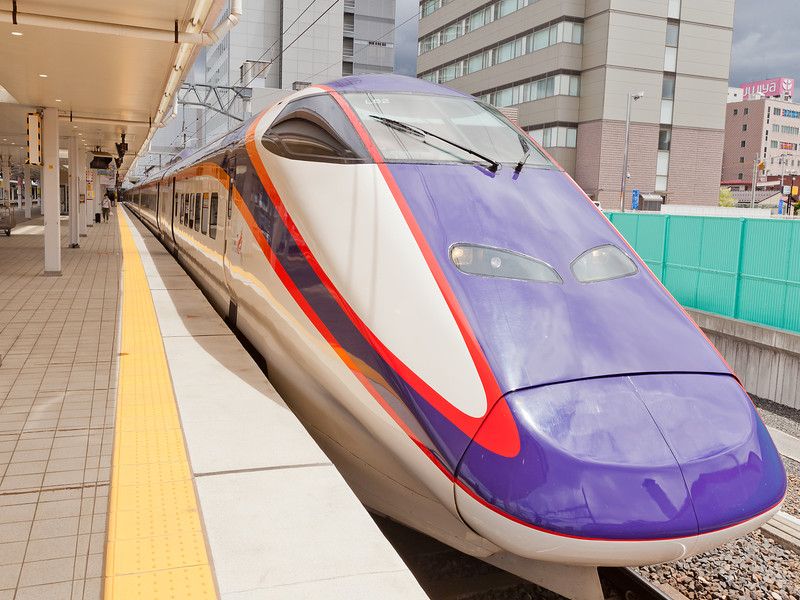 Imagine a day of skiing or snowboarding on fresh, white powder, followed by a relaxing soak in a natural hot spring. In Japan, Yamagata’s Zao Onsen Ski Resort is a prime location for a winter wonderland get away. But how do you get there?

The Yamagata Shinkansen is the answer. The Yamagata Line begins in the bustling metropolis of Tokyo and offers easy access to Yamagata Prefecture. Much international travel to Japan involves a trip to Tokyo, either by air or by land. Why not branch out into Yamagata during your next visit to the Neon City?

While in the area, be sure to check out all that Yamagata Prefecture has to offer, including the scenic mountain temple of Yamadera, the sacred mountain shrines of Dewa Sanzan, the old-fashioned Ginzan Onsen, and the coastal commercial center of Sakata.

Yamagata Shinkansen with the JR Pass

The Yamagata Shinkansen Line offers fast, easy travel between Tokyo and Yamagata Prefecture. With your Japan Rail Pass, travel is affordable, too. Use this travel guide to familiarize yourself with both the Yamagata Line and the use of the JR Pass.

The Yamagata Shinkansen is often called a “mini-shinkansen” due to its ability to operate on conventional train tracks. These smaller trains operate at slower speeds after branching from the Tohoku Shinkansen Line.

Two types of Tsubasa bullet trains operate on the Yamagata Shinkansen Line, the E3-1000 Series and the E3-2000 Series. The Tsubasa trains are generally coupled to Yamabiko trains between Fukushima and Tokyo. At Fukushima, they are uncoupled and run independently to Yamagata Station or on to Shinjo.

Most Tsubasa Shinaksnen trains offer both Ordinary Car (standard) and Green Car (first class) seating options. Both reserved and non-reserved seating is available. Seating on Ordinary Cars is in a 3×2 layout, with a layout of 2×2 in Green Class Cars. Each train offers vending machines, food carts with snacks, drinks, and meals, and washroom facilities.

The entire route from Tokyo to Shinjo is 421 kilometers in length and takes about three and a half hours.

When you arrive in Japan, you will need to activate your JR Pass. This can be done at the ticketing counter of any major railway station. If you would like to reserve seats prior to your departure, you may do this at the ticketing counter as well. Whether using reserved or non-reserved seating, have your Japan Rail Pass ready to present at the boarding gate.

If traveling from Tokyo to Yamagata, simply board the JR Yamagata Shinkansen at Tokyo Station. Trains depart each hour, and the trip takes approximately two and a half hours. The entire trip is covered by the JR Pass.

The fastest train services stop only at Fukushima, Yonezawa, and Kaminoyama along the way.

Don’t forget to check out some the great attractions this route has to offer, such as the Fukushima Prefectural Museum of Art, the scenic Namekawa Great Falls in Yonezawa, and the cherry blossom viewing favorite, Tsukioka Park in Kaminoyama.

Adventure is calling you. Book your JR Pass and start planning your next trip today.