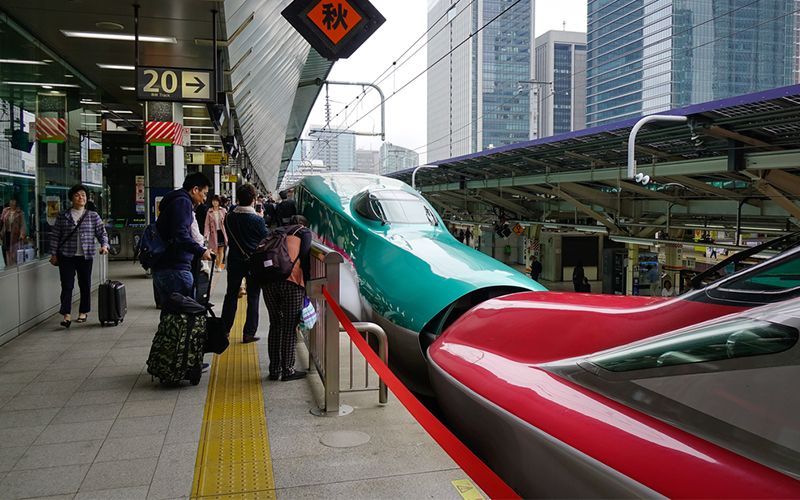 When you think of Japan, what comes to mind? You may think of the busy streets and flashing lights of Tokyo. However, travel from Tokyo along the Akita Shinkansen Line can introduce you to many other faces of Japan.

Akita City serves as the capital of the Akita Prefecture, located in the northern portion of Japan’s Tohoku Region. Its most famous attraction is the Kanto Matsuri festival held each August. This festival produces stunning visuals as attendees take to the streets, balancing long bamboo poles laden with dozens of glowing paper lanterns. Other points of interest include the Akita Museum of Art, the panoramic views of the Port Tower Selion, and the Akita Omoriyama Zoo.

Along the way, you may wish to stop at other attractions. Not to be missed is the four-century-old Rock-Breaking Cherry Tree of Morioka, which grew from a crack in a boulder outside the Morioka Courthouse. Or, you may visit the Aoba Castle in Sendai and its accompanying museum. You can reach these attractions and more from the comfort of one of Japan’s fastest bullet trains.

You can use your Japan Rail Pass to travel quickly, easily, and inexpensively from Tokyo to Akita and everywhere in between. Use this helpful guide to learn about the route and how to use your JR Pass.

Stations along the Akita Shinkansen Line include Morioka, Shizukuishi, Tazawako, Kakunodate, Omagari, and Akita Stations. It also include those stations that are already part of the Tohoku Shinkansen: Tokyo, Ueno, Omiya, Oyama, Utsumomiya, Nasushiobara, Shinshirakawa, Koriyama, Fukushima, Shiraishizao, Sendai, Furukawa, Kurikomakogen, Ichinoseki, Mizusawaesashi, Kitakami, Shinhanamaki. Most trains do not stop at all stations, so check your train’s itinerary carefully if your intended destination is an obscure station. 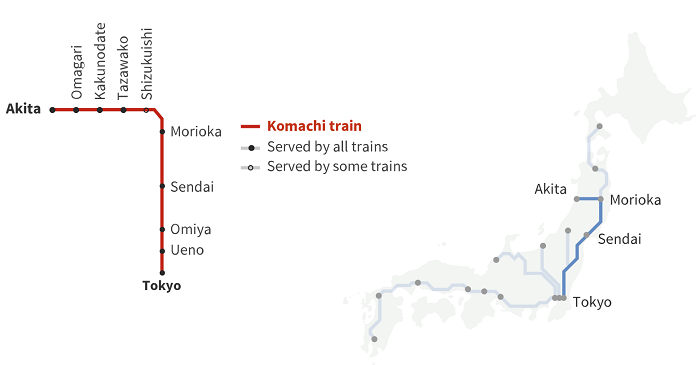 Between Tokyo and Morioka, Komachi trains of the Akita Shinkansen Line are coupled with the Tohoku Line’s Hayabusa Shinkansen. The Komachi is then uncoupled for the remainder of the journey between Morioka and Akita.

Super Komachi trains operate independently over the entire route. As railway tracks are updated, these trains will exceed 320 kilometers per hour, making them the fastest Shinkansen model currently in operation.

Two classes of seating are available, Ordinary Class and Green Class. Each train includes one Green Class Car, and all cars have a 2×2 seating arrangement. All seats can swivel up to 180 degrees, and the train seats 338 passengers across seven cars. Vending machines, food carts with snacks, drinks, and meals, and washroom facilities are available onboard. Power outlets are available at all Green Car seats, as well as the window seats, front row, and last row seats of the ordinary car.

You can use your JR Pass to travel along the Akita Shinkansen Line; the entire trip is covered by your JR Pass. Don’t forget to activate your JR Pass at any major railway station prior to use.

All of the seating on the Komachi trains is reserved seating. Be sure to book your seat in advance. This can be done at the ticketing counter at the railway station. Have your Japan Rail Pass ready to present at the boarding gate.

Traveling from the metropolis of Tokyo to Akita is one of the most popular uses of the Akita Line, especially for international travelers.

The trip is fully covered by the JR Pass, so simply make your seat reservation, and board the Akita Shinkansen at Tokyo Station. The entire trip from Tokyo to Akita is 670 kilometers and takes approximately 4 hours. Trains depart from Tokyo Station nearly every hour.

Popular stops along the Akita Shinkansen Line include Sendai, Morioka, Semboku, and Daisen.

Where will Japan Rail Pass take you? Book your JR Pass today, and get ready for your next adventure.