JRailPass.com » Japan Travel Blog » Destinations » Niigata Travel Guide: Access and what to do 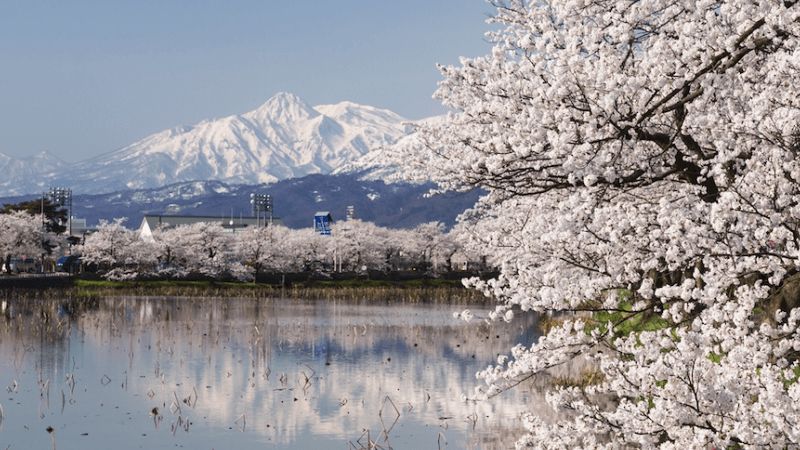 Niigata Prefecture is well known for its quality rice, summer fireworks, winter skiing, and year-round onsen. The prefecture’s capital, Niigata City, represents the largest port on the Chubu Region’s Japan Sea coast and is home to more than 800 thousand people.

One of Niigata’s most famous landmarks is the six arches of the Bandai Bridge. The bridge was completed in 1929, is illuminated at night, and supports 20,000 dancers during the annual daiminyonagashi, or Folk Dancing Parade. However, the bridge represents just one of the many appealing attractions that Niigata has to offer.

What adventures await you in Niigata? Grab your Japan Rail Pass, and let this handy travel guide lead the way.

Tokyo to Niigata by train

Niigata Prefecture is located in west-central Japan. It can be easily accessed by train from almost any part of the country, as well as from abroad. Consider some of the most common routes.

The most rapid means of travel between Tokyo and Niigata is the Joetsu Shinkansen, which departs Tokyo from either Tokyo Station or Ueno Station. You will also pass through Takasaki, Echigo-Yuzawa, Urasa, and Nagaoka Stations before reaching Niigata. If you travel from Kyoto, Osaka or Nagoya, you should first travel to Tokyo.

The trip takes less than two hours and is fully covered by the JR Pass. Alternatively, you may take the Tohoku Shinkansen line to Koriyama, then transfer to the local Banetsu-sei line to Niigata. Local trains may not be covered by your JR Pass.

When traveling from other Japanese cities, you may travel through Tokyo or connect directly to the stations en route, like Takasaki station. Sea connections to Niigata from Korea, China, and Russia are also available.

Many attractions are located near the train station and the city center and can be reached on foot. Buses are available for longer trips, and ferries troll the waters between the mainland and the islands.

Things to do in Niigata

Within the city itself, the traditional Hon-cho Market is not to be missed. It is open daily from 10 am to 5 pm. Nature lovers will enjoy the Marinepia Nihon-Kai Aquarium, complete with over 450 species and performing dolphins.

For the history buff, a visit to the Niigata City History Museum, as well as the Shibata Castle and gardens, is certain to delight. When you get hungry and need a break, consider dining at the Bandai City Rainbow Tower. There, you can view the cityscape from the revolving restaurant and observation deck. This tower is part of Bandai city, which has something for every traveler – shopping, restaurants, hotels, movie theater, and a convenient bus station.

In winter, the Gala Yuzawa Ski Resort is one of the most easily accessible from Niigata and Tokyo – in fact, the mountain gondola departs directly from the Tokaido Shinkansen station. There are about twenty resorts in the area, and tickets are available that offer access to the slopes at multiple locations. For example, a three resort Gala Yuzawa Pass costs just over ¥5,000. The resorts are located close together, so you may be able to ski between them.

During the warmer months, Niigata’s beaches attract many visitors. Sado Island, one of the largest in Japan, is one such location, accessible by ferry ride from Niigata City. The island has a long history. Due to its remote location, it once served to detain political exiles.

During the Edo period, it was home to the country’s most productive gold mine, which today is open to tourists. There, you can view animatronic miners “working’ in the mine, and try to lift the weight of a real gold bar in the museum. Each year, the Earth Celebration music festival takes place there, featuring a home-grown band that has gained international acclaim. The island is also home to the extremely rare toki, or Japanese ibis.

In addition to beaches and slopes, seasonal activities abound. In the spring, tulip festivals are held in Niigata City. The Hakusan Koen Park and Shrine are prime locations for cherry blossom viewing. In August, a huge fireworks display is the highlight of the Niigata Festival.

Relaxation, natural beauty, and interesting sights await you in Niigata Prefecture. Are you ready? Start planning your next Japanese vacation today!