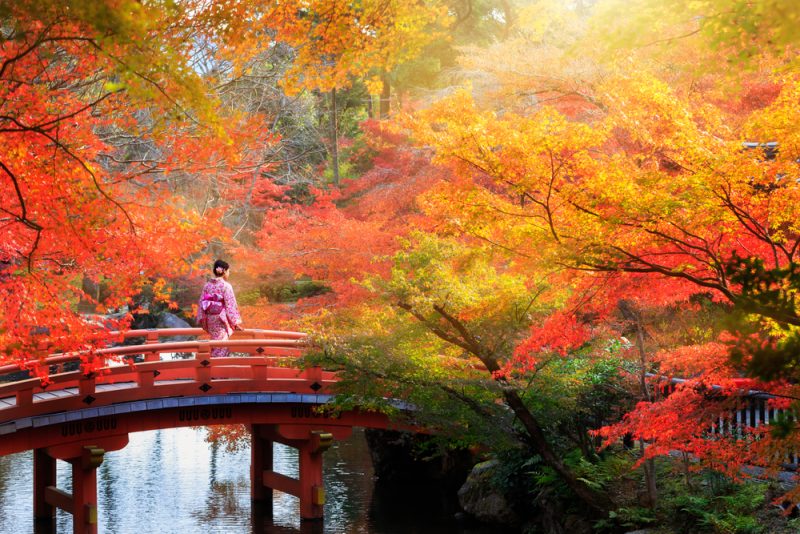 What is the best time to visit Japan? This is a common question among first time travelers. Many would say that the sakura cherry blossom season in the spring is the best, and it is certainly among the most popular. However, there is another feature of the changing season in Japan that is not to be overlooked.

A favorite Japanese pastime is called momijigari or koyo – both are terms describing the viewing of autumn leaves in Japan.

What makes autumn in Japan so special?

Beginning in mid-September and lasting until December, Japan enjoys a very long season of autumn colors – around three months total, with vibrant colors in a single location for up to five weeks. The Japanese maple leaf is known for its deep red hue, while other deciduous trees display shades of yellow, orange, gold, and brown.

In some areas, the kusamomiji, or autumn grass, compliments the tree line with its own flaming red color. The weather in Japan is also particularly pleasant during the fall season.

Check out our Fall Leaves Forecast for updates on your favorite locations. Your trip during fall in Japan is certain to be memorable.

There really are no unfavorable places for leaf viewing in Japan. Even in the big cities, beautiful parks provide access to thousands of trees. Listed below are ten of our favorites. Would you like to visit more than one location? Doing so is easy and affordable when you travel by train using your Japan Rail Pass.

In addition to vivid fall colors, you can enjoy a cup of authentic green tea amid the Eikando Temple gardens. The grounds are illuminated at night to enable night time viewing.

The temple is close to the Nomura Art Museum and Nanzen-ji area, as well as the southern end of the Philosopher’s Path.

Located on the outskirts of Kyoto, Arashiyama offers views of forested mountains blanketed with a patchwork of multicolored trees. You can also tour the temples of Arashiyama and enjoy a romantic ride in the Sagano Scenic train.

The Tofukuji Temple is one of the most popular koyo locations in Kyoto. Its trees blaze with orange and red coloration. The Tsutenkyo Bridge offers an impressive view of the temple grounds.

The ginkgo tree, known as icho in Japanese, is the official tree of Tokyo, and it lines many of the city’s streets. The most famous of these is the Ginkgo Avenue in Meiji-jingu Gaien Park. These stately conical trees turn bright yellow in late November.

Ueno Park was established almost 150 years ago, and it is home to nearly 9,000 trees. Such a concentration makes it a prime location for foliage viewing. While there, you may also wish to visit the park’s museums and shrines.

The Rikugi-en is an Edo period garden that was restored in 1878. It offers a truly unique koyo experience – viewing the colors at night. Trees surrounding the lake are illuminated so that they can be enjoyed even after the sun has set, and the lights and leaves reflect mystically upon the surface of the lake. This park charges an entrance fee of ¥300.

Located north of Tokyo, and 70 km west of Nikko, the hiking trails that wind through this park make it a prime location for leisurely koyo viewing. Its terrain is varied, ranging from mountains to grassland and marshes.

Oze is also a unique habitat for the grasses of kusamomiji, the autumn grass colors. As you hike its trails, you will find yourself amid a sea of golden red swaying fronds.

If traveling to Japan in the early fall, this mountainous region is one of the best places to spy nascent fall colors. Take a cable car up the mountain, and then take a one hour hike to its peak. After a long day of hiking, relax at the nearby Nasu-Yumoto-Onsen.

If you want to avoid the crowds yet still view Japan’s autumn foliage, this park is a good option. Daisetsuzan, in Hokkaido, is among the first location to receive koyo in Japan, yet it is seldom frequented by tourists. The park is also home to volcanoes, lakes, mountain, and hot springs.

Viewing Japan’s fall leaves in the shadow of the famed Mount Fuji is a spectacular sight. If you rent a boat to tour Lake Kawaguchiko, you will be seeing double the scenery as the beauty of both mountain and trees are reflected on the surface of the lake.

Based on the weather patterns, the actual emergence of the fall colors may differ from established estimates. The autumn leaves may begin a few days to a few weeks early if the weather is cool, or they can occur late if it is unusually warm.