JRailPass.com » Japan Travel Blog » Itineraries » How to Travel from Fukuoka to Nagasaki 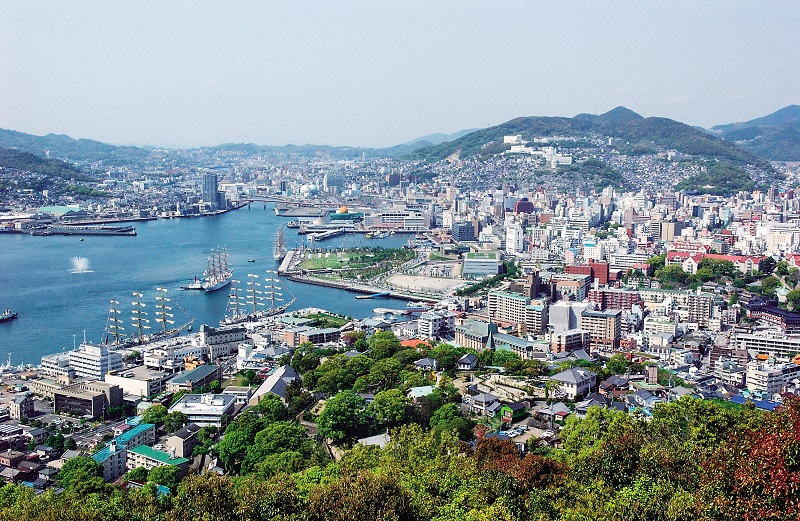 Fukuoka and Nagasaki are two of the biggest metropolitan areas in the north of the southern Japanese island of Kyushu and among the most popular destinations in the area.

Travelers planning to visit Kyushu have various transportation options available for getting between these metropolitan areas, including by train on the Limited Express Kamome train and local JR train services.

There is also a highway bus in operation between Fukuoka and Nagasaki, and a Shinkansen service is currently under construction and is expected to be in operation from 2023.

Fukuoka is the capital of Fukuoka Prefecture and well-known for its range of unique attractions, such as the ruins of Fukuoka Castle and Tōchō-ji Temple, the oldest Shingon temple in Kyushu.

Nagasaki, located on Kyushu’s northwest coast, is situated in an attractive natural harbor and stretches out across the surrounding green, forested hills. It is well-known internationally for the 1945 nuclear attack, which is commemorated in the Nagasaki Atomic Bomb Museum and Peace Park.

The distance between the two cities is roughly 150 kilometers. Consider the following options to travel between Fukuoka and Nagaski.

Travel on the Limited Express Kamome train between Hakata station in Fukuoka and Nagasaki station is fully covered when traveling with the JR Pass.

The service is incredibly frequent, with either 1 or 2 trains departing from Hakata station every hour, and the trip takes approximately 2 hours to complete.

The trains which run on this line are the Kamome 885 Series. Kamome means seagull in Japanese and the trains are known for their sleek and innovative design, spacious seating, and comfortable fixtures which allow for a relaxing journey along the scenic route to Nagasaki.

The trains also include a common area Gallery car, a vibrant art space with its own theme and design which passengers can explore during their trip.

The Limited Express Kamome train covers the following stops on the route between Fukuoka and Nagasaki:

A one-way ticket for an unreserved seat on the service costs approximately 4,270 yen, while a discounted price of 6,300 yen is applicable when buying two tickets at the same time. However, in addition to being included with a JR Pass, passage on this service is fully covered if the traveler is a holder of either the North Kyushu Area Pass or the All Kyushu Area Pass, meaning there is no need to pay any additional fees.

The Limited Express Kamome Line carries both ordinary cars and Green cars (first-class), and both non-reserved and reserved seats are usually available.

Travel on Japanese local trains between Nagasaki and Fukuoka is also covered by the JR Pass, and the two regional passes mentioned above.

When taking a local train from Hakata Station to Nagasaki, one transfer is required along the route, at Shin-Tosu Station in Saga prefecture.

Journey times on these services are slightly longer than on the Kamome Limited Express, as local trains stop at every station along the route and vary from between 4-5 hours.

Those who do not hold a JR pass or regional pass for Kyushu can expect to pay roughly 2.860 yen for a one-way ticket on this local route.

Green cars are not available on these services, as most local trains only carry ordinary cars. It is also not possible to reserve seats on JR local trains.

The future of Kyushu Shinkansen

At the moment, there is not a Shinkansen bullet train line in operation between Fukuoka and Nagasaki. However, you can travel from Fukuoka to Shin-Tosu using the Kyushu Shinkansen and, from there, continue your journey to Nagasaki along the Nagasaki Line.

The Nagasaki Shinkansen connecting the two cities, later re-named as the West Kyushu Route, has been in planning since 1973, using the existing narrow gauge track from Shin-Tosu to Takeo-Onsen,as well as a newly built Shinkansen line from Takeo-Onsen to Nagasaki.

Work on the Kyushu Shinkansen line between Takeo-Onsen and Isahaya began in 2008, and the government approved the construction of the section between Isahaya and Nagasaki in 2011. The entire West Kyushu route is scheduled to be completed by March 2023.

Travel time between Fukuoka and Nagasaki is expected to be as little as 40 minutes if the entire line is constructed to current Shinakansen standards.

Once operational, holders of the JR Pass or Kyushu regional passes mentioned above are expected to be able to travel on the Nagasaki (West Kyushu) Shinkansen route at no additional charge.

Highway buses are an ideal option for those traveling around Japan on a tight budget and many services also operate overnight. Prices are much cheaper than on limited express trains, although journey times tend to be much longer.

The journey on a Nishitetsu bus between Nagasaki and Fukuoka takes roughly two and a half hours in total.

Although the JR Pass and Kyushu passes cover travel across Japan on some JR bus local networks, they do not cover travel on the highway bus between Fukuoka and Nagasaki. The price for a one-way ticket on this bus service is approximately 2620 yen.