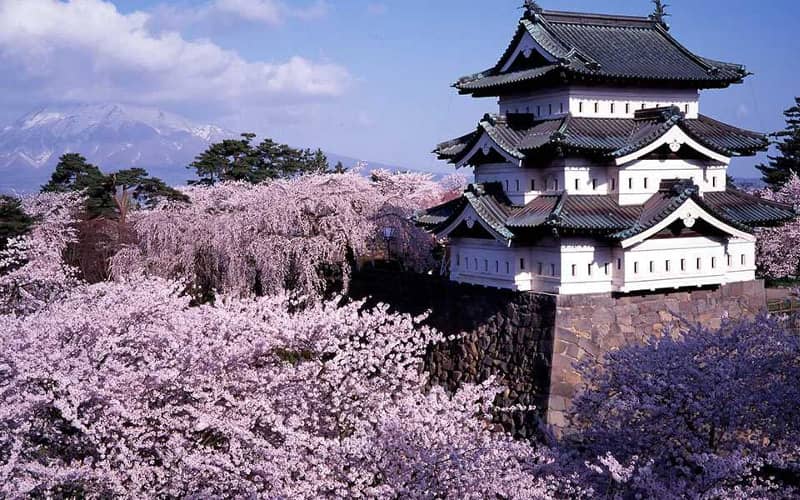 Hirosaki Castle is one of the top sights to see if you are in Aomori Prefecture in the north of Japan. One of only a handful of Japanese castles not rebuilt during the modern era, Hirosaki Castle stands as a monument to the country’s historic architecture.

Listed by the Japan Castle Foundation as one of the “100 Fine Castles of Japan”, Hirosaki is the only castle in the Tohoku region that was constructed in the Edo Period (1603-1867).

Surrounded by the scenic gardens of Hirosaki Park, it is considered to be one of the most beautiful castles in Japan.

How to get to Hirosaki Castle

Both the castle and the surrounding park are easy to reach if you have a JR Pass.

Take a train to JR Hirosaki Station. From here, you can either catch a bus to the Shiyakusyo Mae (City Hall) bus stop or simply walk (either way, it will take about 20 minutes).

Hirosaki Station sits on the Ou Main Line and the Gono Line, which are covered by the JR Pass.

If you’re coming from Aomori City, you simply catch a train on the Ou Main Line. Express trains from Shin-Aomori to Hirosaki take about 30 minutes.

How to get to Hirosaki Castle from Tokyo

If you’re traveling to northern Honshu from Tokyo, take the Tohoku Shinkansen. This bullet train line terminates at Shin-Aomori — the major train hub of Aomori prefecture.

From here, you can switch to the Ou Main Line and it’s a 30-minute train ride to Hirosaki.

All the trains you need to reach Hirosaki Castle from Tokyo are included in the JR Pass, so you don’t need to worry about buying any other tickets.

A brief history of Hirosaki Castle

Historically referred to as “Takaoka Castle”, Hirosaki Castle was the brainchild of Tsugaru Tamenobu, the first daimyō, or feudal lord of the region. He was granted lordship over the newly-created Hirosaki Domain in 1590. This was a reward from the shogunate after rebelling against the Nanbu clan and distinguishing himself in the Battles of Odawara and Sekigahara.

In 1603, construction began on Hirosaki Castle. It would become the center and capital of the Domain and the Tsugaru clan.

Tsugaru Tamenobu never got to see the completed castle, as he died in 1604. His son, Tsugaru Nobuhira, completed Hirosaki Castle in 1611.

Just 16 years later, in 1627, the original tenshu (keep) burnt down after being struck by lightning.

In 1810, a new 3-storey tenshu was built. This building still stands today, making it one of the oldest surviving main castle buildings in the country.

Sights and structures at Hirosaki Castle

Hirosaki Castle stands out among Japanese castles as one of the few whose Edo-era structures are still intact. 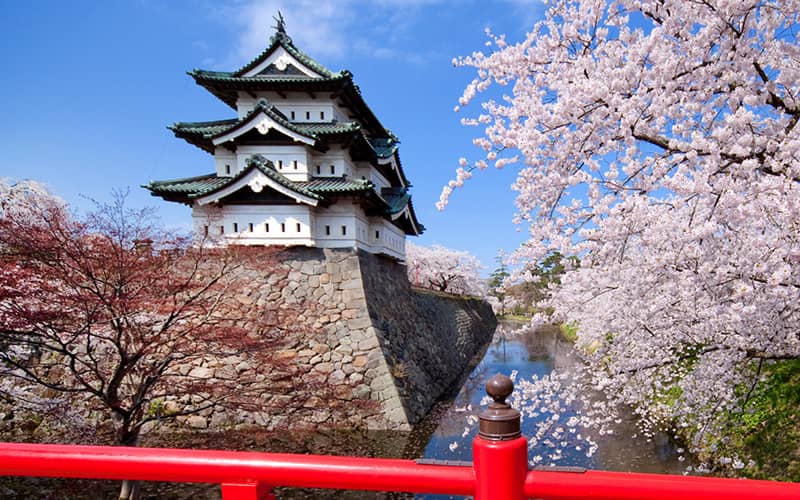 The three-story tenshu and most of the outline of the original castle still stand, as do 3 yagura (watchtowers). There are also 5 surviving gates in the walls of the second and third baileys. Each of these structures have been designated National Important Cultural Properties by Japan.

From 2015 until 2025, Hirosaki Castle offers visitors a rare and fascinating insight into how Japanese castles are built.

As part of a reconstruction effort to repair the stone defensive walls, the entire tenshu — the main center of the castle — has been moved 70 meters (229 feet). This has been done without taking the building apart!

When the base structure has been repaired, the tenshu will be moved back to its original location.

The idea of a “moving castle” may be familiar to fans of Studio Ghibli’s famous anime movie, but here is a chance to see one in real life!

The gardens surrounding the castle form Hirosaki Park. This is famous as one of the best places to see cherry blossom in Japan. There are over 2,600 sakura trees, which bloom spectacularly during the cherry blossom festival (sakura matsuri).

Hirosaki Castle was first converted into a park in 1895. The Tsugaru clan had surrendered it to the new government during the Meiji Restoration. It had since been used as an army garrison, before being donated for public use.

The park also contains the Hirosaki Castle Botanical Garden and the Gokoku Shrine. It is generally a pleasant place to take a walk, have a picnic, go rowing in the castle moats, or simply enjoy the scenery.

During the winter months, the tenshu is closed, but can still be admired from the outside. To offset this, the Honmaru/Kita no Kuruwa Area is free to enter from November 24 until March 31.

The cost of entrance to the Botanical Gardens, again, is ¥320 for adults and ¥100 for children.

There are also combo tickets available, which provide entry to both the Honmaru/Kita no Kuruwa Area, the Botanical Gardens, and the Fujita Memorial Garden. These cost ¥520 for adults and ¥160 for children.

There are discounts on all tickets if visiting as a group of 10 or more.