JRailPass.com » Japan Travel Blog » Itineraries » How to get from Narita Airport to Osaka 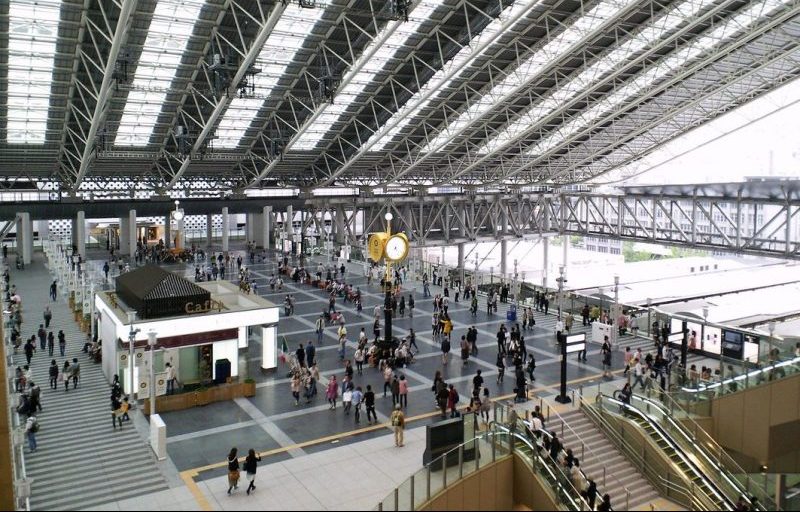 Narita International Airport is the gateway most travelers take into Japan. It is located in the Chiba prefecture some distance from Tokyo. There are a number of options available for travel to Osaka after your plane touches down. The following guide can help you select the travel services that are right for you.

Osaka has become a destination by its own merits. As a port city, Osaka is known for its merchants and delicious food, especially street food. In fact, Osaka is sometimes referred to as “the kitchen of Japan.”

Osaka has been described by travel bloggers as “cheaper, dirtier, and a whole lot friendlier than Tokyo.” This major Japanese city has a population of 2.7 million inhabitants, not to mention the influx of tourists. It is located close enough to Tokyo, Kyoto, and Kobe to warrant a visit during your stay in Japan.

It is also home to world-famous attractions such as the Dotonburi area and Universal Studios Japan. Other popular attractions include the Osaka Aquarium, the towering Osaka Castle, one of the oldest temples in Japan, and important shrines.

Use this handy travel guide in planning your trip from Narita Airport to Osaka.

Narita Airport to Osaka by train

Japan is famous for its extensive and efficient railway system. Foreign travelers can navigate this system easily and inexpensively with the purchase of a Japan Rail Pass.

Your JR Pass can cover your entire journey from Narita Airport to Osaka.

From Narita Airport, take the JR Narita Express to Tokyo Station. Trains depart approximately every two minutes. The route is direct, and the journey will take about an hour and fifteen minutes.

Tip: Tokyo is another of Japan’s must-see destinations. If your itinerary allows, plan on spending some time in this “neon city” before continuing on to Osaka.

Continue your journey to Osaka by taking the Tokaido Shinkansen. The route is direct and the trip will take about two and a half hours. Trains depart about every eight minutes. Note that the Nozomi trains not covered by the JR Pass. However, the Hikari and Kodama Shinkansen are available and are fully covered by the JR Pass. Kodama trains are the slowest and are typically avoided unless no other options are available.

You can reach downtown Osaka using the JR Kyoto Line. Take this line from Shin-Osaka Station to Osaka Station.

Narita Airport to Osaka by bus

Limousine buses are available to take you from Narita Airport to Tokyo. From there, you can catch a highway bus to Osaka. Bus stops are located at all the major train stations. The Tokyo to Osaka trip by bus ranges from six to ten hours, with an eight-hour average. Both day and night buses are available. Some travelers prefer the overnight trip, as they can sleep on the bus and avoid hotel expenses for the night.

Bus fares from Tokyo to Osaka may cost between $20 and $90 USD, depending on the level of comfort you desire.

If you’re in a hurry, you can take a domestic flight between Tokyo and Osaka, Narita Airport to Kansai International Airport. Low-cost carriers such as Jetstar and Peach often offer this route for as little as $30 to $110 USD.

The flight lasts about 1.5 hours. Considering the complications of airport transfers and the need to travel into the city from Kansai International, many travelers prefer the 2.5 to 4 hour trip by train.

Car rentals are also available at Narita Airport. The journey by car will take you along Japan’s southern coast. You will travel through Tokyo, Kanagawa prefecture, Shizuoka prefecture, Aichi prefecture, and Kyoto before arriving in Osaka. In good traffic conditions, the trip takes about seven hours, covering a distance of 574 kilometers. Please note that you will be using roads with tolls.

Traveling by car is a good option if you are not in a hurry, would like to engage in sightseeing, or wish to make many stops along the way. The costs and time of traveling by rental car are often greater than the other methods discussed.

If Osaka is your last destination while in Japan, you may find yourself traveling from this city back to the airport. The reverse trip from Osaka to Narita Airport is much the same as what is described above.

You may take the Tokaido Shinkansen line from Shin-Osaka Station to Tokyo Station. From there, take the Narita Express back to the airport.

Or, you may take a bus, rental car, or domestic flight.