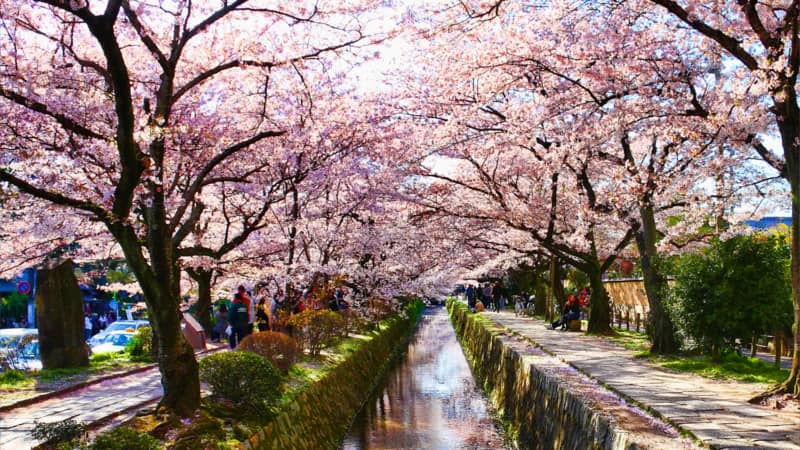 The Philosopher’s walk, also known as Tetsugaku no Michi, is a pedestrian route located in the Northern Higashiyama district of Kyoto that stretches for around 2 kilometers along the Lake Biwa Canal among stunning natural scenery.

The path was named for Kyoto University professor and influential 20th-century Japanese philosopher Nishida Kitaro, who is said to have used the route for a daily meditative walk, and nowadays is well-known as a popular cherry blossom and autumn foliage viewing location.

Philosopher’s walk also passes by some of the most impressive shrines and temples in Japan, many of which are just a short stroll from the canal and easy to visit, as well as a number of charming restaurants and cafés perfect for a light lunch.

Fans of felines will be happy to hear that a number of very friendly cats live along the route, and there is also the opportunity to discover some of Kitaro’s poetry escribed on large stones beside the path.

The Philosopher’s Path runs between Ginkakuji temple and the Higashiyama neighborhood of Nanzenji and is easy to access from Kyoto Station in around 40 minutes.

To reach the route, those arriving in Kyoto by train should take the No. 100 City Bus from Kyoto Station in the direction of Kiyomizudera Temple and get off at the Ginkakujimae stop.

In addition to being a relaxing hiking trail, the Philosopher’s Walk is one of the most popular places to take in the cherry blossoms in Kyoto. Cherry blossom viewing, also known as Hanami, mostly takes place during the month of April when the blooming flowers are at their most vibrant.

The amount of time it takes to complete the walk is usually around 30 minutes, but it can take longer during the Hanami season due to the crowds of both locals and tourists who flock to the tree-lined canal. Furthermore, most visitors take the time to visit the many attractions just off the route.

To avoid the crowds during Hanami, visitors are advised to consider walking the path after the sun has gone down and revelers have largely gone home.

Although a walk in the dark may not sound too appealing, the Philosopher’s Path is illuminated at night and appears positively magical after sunset.

Another solution for beating the crowds is to visit the Philosopher’s Walk during June, when visitors tend to be scarcer. Although the month sees the rainy season arrive in Kyoto, those who don’t mind getting a little wet have more opportunities for a contemplative stroll.

As stated above, the Philosopher’s Walk is around 2 kilometers long, and starts in Ginkakuji and ends in Nanzenji. Visitors can start the route at either end, and will find a number of signs along the canal that point to the numerous attractions that can be found just off the path.

Some of the most impressive include:

Visitors hiking the northern part of the route during August may also be able to catch a glimpse of the Daimonji celebration which takes place on the 16th of the month.

The culmination of the local Obon festival, this event involves the lighting of 5 huge bonfires on mountainsides surrounding Kyoto and symbolizes the return of deceased family embers to the spirit world.