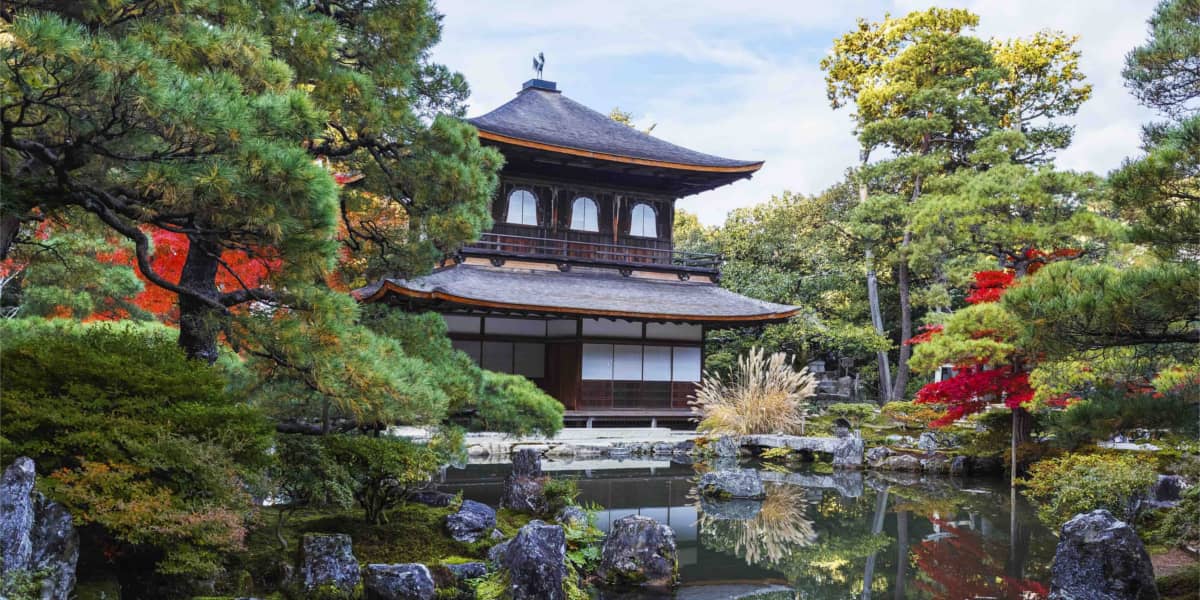 The Ginkakuji Temple is also known as the Silver Pavillion, although, curiously, it is not coated in silver plating as one would expect from the name, although that was indeed the original intention of its designer.

A Rinzai Zen temple located in Kyoto, Ginkakuji is situated in the Higashiyama eastern mountains in the city’s Sakyo ward and also goes by the name Jishō-ji, which means the Temple of Shining Mercy.

Widely considered to be one of the best temples to visit in Japan, it is also regarded as a prime example of the architecture of the Higashiyama Culture that flourished during the country’s Muromachi period.

The Ginkakuji Temple was built in 1482 by the famous shogun Ashikaga Yoshimasa as a retirement villa, with the design reflecting his grandfather’s own Golden Pavilion (Knkakuji), at the base of Kyoto’s Kitayama mountains in the north of the city.

Yoshimasa was obsessed with the arts and Ginkakuji became a center of Higashiyama Bunka traditional culture in Kyoto, from which Japanese traditions such as the tea ceremony, flower arranging, poetry, garden design, and Noh theater emerged.

Yoshimasa is said to have used the idyllic villa as a refuge from the ravages of Ōnin War, and to have used the beauty of Ginkakuji’s extensive gardens as a distraction to the sight of the city of Kyoto burning below as the conflict worsened.

It was during the war that construction was halted on the villa and the initial plans to cover the building with an overlay of silver foil were dashed, giving the structure an unfinished appearance.

Although many say the name ‘Silver Pavilion’ comes from these failed design plans, others claim the title comes from the way the moonlight reflected on the black lacquer facade. Either way, the nickname is said to have only originated during the Edo period, from 1600–1868.

Towards the end of his life, Yoshimasa became a Zen Buddhist monk, and after his death in 1490 the Ginkakuji complex became a Buddhist temple. It was renamed Jishō-ji, after Yoshimasa’s Buddhist name.

In 1994, it was listed as one of the many UNESCO World Heritage Sites in Japan, alongside a number of other historic temples in Kyoto.

How to get to Ginkakuji

It’s easy to get to Ginkakuji, as it’s located a short distance from Kyoto Station, it’s just a 40-minute direct bus ride to the Ginkakuji-mae stop, a short walk away from the Silver Pavilion. Bus numbers 5, 17, or 100 all conveniently serve the temple.

An alternative option is to get to Ginkakuji on foot by taking a stroll along Kyoto’s famous Philosopher’s Path, a scenic walking route along the Lake Biwa Canal that starts in Nanzenji and takes around 40 minutes to complete.

Widely considered to be one of the best things to see in Kyoto, the Ginkakuji complex is made up of the main building, the Silver Pavilion, as well as a number of other temple structures, and extensive grounds including its famous sand garden.

The gardens, spread out over two levels, can be enjoyed by walking in a circular route around the temple grounds, and includes a large lake which is best admired from the first floor of the main structure.

After undergoing extensive restoration work which began in 2008, the Ginkakuji temple and its impressive gardens are now once again fully accessible for the public to enjoy.

Formally known as Kannonden or Kannon Hall, the Silver Pavilion is undoubtedly the main attraction at Ginkakuji, and for good reason.

The pavilion consists of two stories which were constructed in two completely separate architectural styles, and is one of the only buildings in the complex to remain intact in its original state after centuries of fires and earthquakes.

This has been helped by regular renovations of the building: the most recent work to reinforce the structures’ roof and earthquake resistance was completed in 2010.

One of the main draws in the pavilion is the gilded statue of Kannon, the Buddhist Goddess of Mercy, located in the temple’s upper floor in the butsuma altar room.

Another big draw at Ginkakuji is its unique sand garden, known as the “Sea of Silver Sand”. The most famous feature of the garden is the large sand cone in its center, named the “Moon Viewing Platform”, which is said to symbolize Mount Fuji.

The only other structure in the complex to have survived intact from the time of the temple’s initial construction, the Togudo was considered a radical piece of design that inspired both Japanese military and domestic architecture for generations,

A Buddhist hall designed in the style of a residence, the Togudo’s most celebrated feature is its tatami mat tea room, widely considered to be the oldest example of the Shoin architecture style still used in tea room design to this day.

The building’s study room also contains some of the oldest examples of features still commonly found in many traditional Japanese homes, such as a shoin (built-in desk) and sliding screens painted with elaborate designs.

Visitors to the temple are able to follow the circular walking path from the Togudo to discover another of the unique features of the complex, the moss garden, which consists of a series of elegant ponds peppered with landscaped islands and bridges.

The path then continues up the hill beyond the main buildings though peaceful woodland, from where visitors can take in spectacular views of the temple grounds and the city of Kyoto in the distance. The summit is also a great place to see the Autumn foliage in Japan.

Ginkakuji’s opening hours are as follows:

The entrance fee is 500 yen for adults, and 300 yen for children (up to junior high school age).