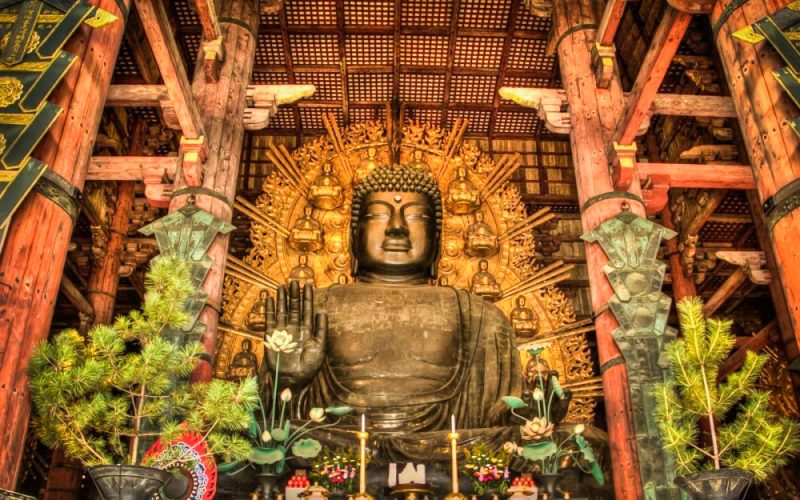 Japan is well known as a nation of longstanding culture. Its rich history plays across its modern landscape in both its structures and its people. Fittingly, Japan is home to twenty of the more than 1,000 World Heritage Sites as described by the United Nations Educational, Scientific, and Cultural Organization (UNESCO).

UNESCO World Heritage Sites are deemed such due to their “outstanding universal value” in the fields of science, history, or culture, and are “important to the collective interests of humanity.” The sites are considered cultural property and are legally protected by international treaties.

These sites fall into two categories: cultural and natural locations. Why not immerse yourself in one of these sites on your next Japanese vacation? Check out our complete listing of UNESCO sites to discover which sites resonate with you personally.

Listed in 2016, this museum is located in Ueno Park, Tokyo. It is renowned for its architecture by Le Corbusier. It contains over 4,500 sculptures and paintings from the last 500 years including works by Van Gogh, Monet, Renoir, and Cezanne. The exterior ground are also very impressive.

Listed in 2015, the Industrial Revolution Sites are located in eight of Japan’s prefectures, highlighting Japan’s rise to become an industrial power. They symbolize the country’s key industries such as iron, steel, shipbuilding, and coal mining which were central to the country’s rapid economic growth.

Tomioka, in the Fukushima prefecture, was the first silk mill to employ modern machinery, and was important to the industrialization of Japan. It received world heritage status in 2014 for its central role in transforming the Japanese silk industry into an international trade commodity in the 19th century. Several of today’s leading manufacturers, including Toyota, are rooted in the industry.

Listed in 2013, Mount Fuji (Fujisan) in Yamanashi is a symbol of Japan itself and is considered culturally and spiritually inspiring. The views from afar are truly spectacular on clear days and thousands of visitors choose to make the climb each year. The official climbing season runs from July to September.

Historic Monuments and Sites of Hiraizumi

Representing the Buddhist “Pure Land,” these archaeological areas, temples, and gardens of Iwate (in north Honshu) were listed in 2011. There is an incredible amount to see but some of the highlights include Chusonji Temple, which attempts to create an ideal Buddhist world, and Motsuji Temple, which famous for its breathtaking gardens.

This site in Shimane was listed in 2007. The mine was established in 1526 and operated for more than 400 years.

Pilgrimage Routes and Sacred Sites of the Kii Mountain Range

Japanese pilgrims have walked these routes for over 1,000 years. There are over 200 miles of the stunning, biodiverse pathways for visitors to enjoy and the Kii Mountain Range is an active site of devotion in both the Shinto and Buddhist religions.

Gusuku Sites and Properties of the Kingdom of Ryukyu

Ryukyu was once a thriving independent state which lived peacefully alongside Japan. The kingdom was abolished in 1879 when it was incorporated into Japan as Okinawa. However, the essence of the kingdom lives in the extravagant castle and the other remains of the romantic, bygone era.

Shrines and Temples of Nikko

Nikko is home to a Buddhist temple and 2 Shinto shrines. They have stood there for centuries along among their stunning natural surroundings. The complex consists of over 300 religious buildings which are known for their incredible architecture and decoration. the oldest of the structure were built in the 8th century.

Nara was the ancient capital of Japan from 710 to 784 and thankfully there is still plenty to witness.There are 8 main structures to see including the magical Nara Palace, Yajushi-ji, and an enormous Buddha. The surrounding area is truly enchanting and wild deer roam freely around the forest.

Located in popularly known as Miyajima island, near Hiroshima, this shrine was listed as a heritage site in 1996. The area has been important to Shintoism since the twelfth century. It is famous for its tori gate that seems to float upon the sea.

Also called the Hiroshima Peace Memorial, this site was listed in 1996. The dome is the only structure to have survived the atomic bombing of the city in 1945. The memorial is intended to remind the world of the importance of peace. Learn more by visiting our Hiroshima travel guide.

The historic villages of Shirakawa-go and Gokayama contains traditional farmhouses which are more than 400 years old. The quintessential Gassho Zukuri thatched roofs lined along the Shogawa River Valley in the remote mountains makes you feel like you’ve gone back in time. The site, near the Japanese Alps, was granted world heritage status in 1995.

Listed in 1994, seventeen structures make up this Heritage Site, including Kinkaku-ji, Byodo-in, and Kiyomizu-dera. Kyoto was founded in 794 C.E., and the historic sites date from the 900’s to the 1600’s. See our Kyoto travel guide for more information.

Listed in 1993, Himeji Castle in Hyogo is a stately example of seventeenth century architecture. The castle recently underwent extensive renovations to restore it to its former glory. Learn more by visiting out Himeji Castle travel guide.

Listed in 1993, the Horyu-ji temple complex in Nara includes forty-eight Buddhist Monuments and two temples, Hokki-ji and Horyu-ji. The ancient structures – thought to be the oldest wooden architecture in the world – date to the introduction of Buddhism in Japan in the seventh century.

Okinoshima and Associated Sites in the Munakata Region

“Located 60 kilometers off the western coast of Kyushu island, the island of Okinoshima is an exceptional example of the tradition of worship of a sacred island,” says UNESCO. The archaeological sites are practically intact and provide a chronological insight on how the rituals performed there changed from the 4th to the 9th centuries.

A group of 12 religious sites which tell the story of Christianity’s revival after years of state suppression during the Edo Period (1603-1867). The sites include a cathedral, churches, and ruins which are dotted around the region of Nagasaki. The original proposal included 26 sites but only 12 were officially listed in 2007.

The several dozen ancient tombs are located south of Osaka and were designated a Cultural World Heritage Site in 2019. They were built between the 4th and 6th centuries for the ancient ruling elite. There are several larger, more elaborate tombs for people of a higher social status as well as smaller, simpler ones.

Thirty islands of Ogasawara were listed in 2011. Located off the coast of Tokyo, the islands are home to 195 bird species considered endangered of extinction. The only way to reach the islands is by a weekly 24-hour ferry ride from Tokyo. On the 2 largest islands, Chichijima (Father Island) and Hahajima (Mother Island), are inhabited.

Located in Hokkaido, this site was listed in 2005. This ecological treasure of northern Japan is home to numerous bird species listed as “threatened.” It is also one of Japan’s most jaw-dropping natural parks. The area is completely unspoiled and therefor hard to access. No roads reach further than 4 miles up the peninsula.

Listed in 1993, this area is among the last virgin beach forests – forests that are untouched and unaltered by man – to be found in Asia, home to the rare Siebold’s beech tree. It is located in the Aomori and Akita prefectures in northern Tohoku.

Listed in 1993, Yakushima Island is located off the coast of Kyushu. It is home to a unique natural ecosystem, including yaku-sagi cedar trees, some of which are over 1,000 years old.

Nearly a dozen additional Japanese sites are on UNESCO’s “Tentative List,” awaiting future induction as World Heritage Sites. How many sites from this growing list have you visited? Check out our destinations category to learn more.

Several locations in the Nansei island chain are under consideration to be added as Japan’s 5th Natural World Heritage Site in 2021.

UNESCO is considering the following locations as part of this latest natural heritage site:

These subtropical islands have their own ecosystems with many unique plant and animal species, making them a perfect candidate for a Natural World Heritage Site.

Amami Oshima Island is known for its picturesque beaches and mangrove forest, while beautiful Tokunoshima Island has both unique natural and cultural attractions — including its own brand of bullfighting and an annual triathlon.

Iriomote Island is a wild paradise in the middle of the ocean — 90% of the island is covered in jungle and mangrove forest. Tours are based around outdoor activities like kayaking, snorkeling, and hiking.

On Okinawa, the Yanbaru Region is a far cry from the urban south of the island. With forested hills and endemic wildlife, this area is ideal for nature-lovers.