A brief history of Nijo Castle

Nijo Castle, called Nijojo in Japanese, was built in 1603. It served as Tokugawa Ieyasu’s residence in Kyoto. Ieyasu was the Edo Period’s first shogun, or ruler of the country.

It took 23 years for construction of the castle to be completed. The shogun’s grandson finally added a five-story castle keep, or tower. The keep is a prominent structure and one of the most defensible.

Beginning in 1867, the castle became an imperial palace. It was later donated to the city of Kyoto and opened to the public as a historic site. As one of the most well-preserved castles of its era, Nijo Castle was named a UNESCO World Heritage Site in 1994.

How to get to Nijo Castle

Departing from Kyoto Station, travel to Karasuma-Oike Station on the Karasuma Subway Line. From there, transfer to the Tozai Line, headed for Nijojo-mae Station. Keep in mind Kyoto subway lines are not covered by Japan Rail Pass. Additional fees may be incurred above what is covered by your Japan Rail Pass. The castle is a short walk away.

If you have a JR Pass, you can take JR Sanin line from Kyoto Station to Nijo Station, a 6 minutes train trip, and then, walk to Nijo Castle entrance, under 15-minutes walk.

Alternatively, you can take Kyoto City Bus numbers 9, 50, or 101 from Kyoto Station.

Niji Castle is open daily from 8:45 am to 5 pm. The castle is closed each Tuesday in January, July, August, and December. If a national holiday falls on Tuesday during these months, the castle will also be closed on the following Wednesday. It is closed from December 29 to 31 each year.

Admission is 600 yen, and an additional 400 yen is charged for admission to Ninomaru Palace. Self-guided audio tours in English are available at a kiosk inside the main gate. These audio guides are rented for 500 yen.

Nijo castle can be divided into three distinct portions. First, the grounds of the castle are entirely surrounded by moats and stone walls. You will enter the castle through a large gate on the eastern wall.

Next, you will enter the Ninomaru through the Chinese-style Karamon Gate. The Ninomaru is the secondary circle of defense, and home to the castle’s main attraction, the Ninomaru Palace.

This palace consists of separate buildings that are connected to one another via corridors. The tour route includes inner rooms that were once accessible to only the most prominent guests or the shogun himself. Many of the rooms contain visible or concealed doors where the shogun’s bodyguards would hide. Beyond the palace lies Ninomaru Garden, which includes a pond and pine trees manicured in the traditional landscape garden style.

The Honmaru, or main circle of defense, is the innermost portion of the castle. The Honmaru includes a second palace as well as the castle keep. While the gardens of the Honmaru are always accessible, the palace itself is opened to the public only on special occasions.

A green space surrounds both the Honmaru and Ninomaru. This space features hundreds of plum and cherry trees of different varieties. Due to late-blooming types, the sakura season at Nijo Castle typically extends from late March through late April. Brilliant autumn colors can be seen in late November, due to red maple and yellow ginkgo trees.

The most recent addition to the castle is the Seiryu-en Garden, constructed in 1965. This cultural event venue features two tea houses and over 1,000 stones that have been precisely arranged.

As mentioned earlier, the buildings of Ninomaru Palace are connected to one another using corridors. Each of these corridors was equipped with special security measures to keep the shogun safe. The flooring, know as “nightingale floors,” were designed to squeak when walked on. This would alert residents to any intruders. 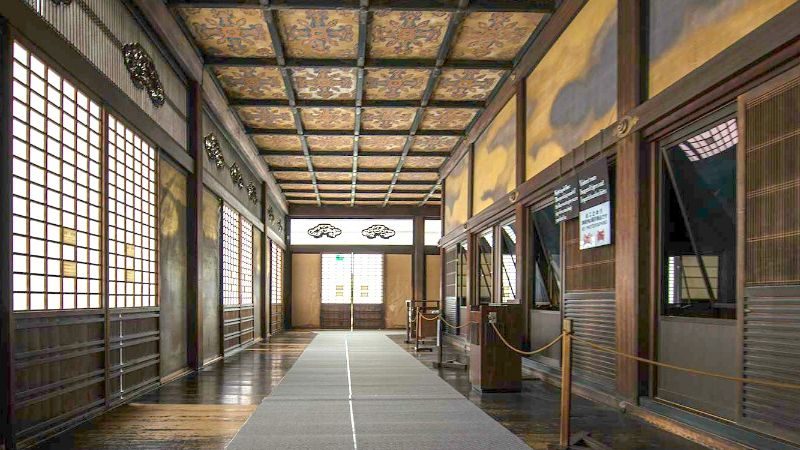 Why the name “nightingale floors”? The nightingale is a type of bird called uguisu in Japanese. The squeaking of the floors could be compared to the chirp of this bird.