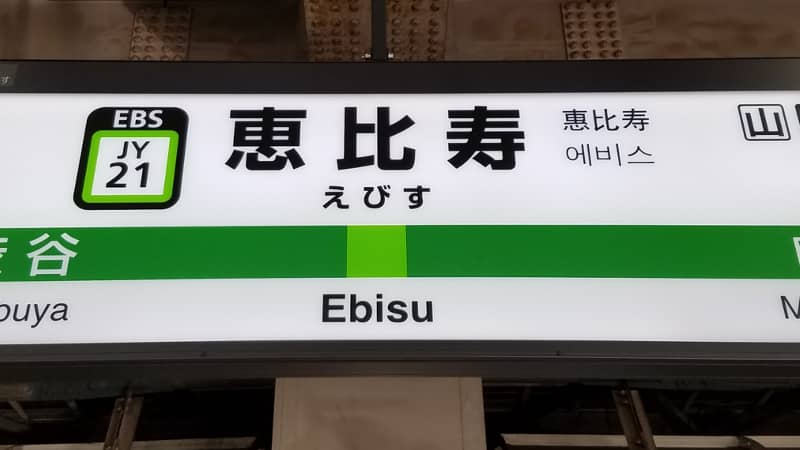 The large city of Tokyo is divided into a number of special wards or municipalities. Tokyo’s Shibuya ward is home to the neighborhood of Ebisu, which contains a JR East railway station of the same name.

The station and neighborhood are named after Yebisu Beer. The brewery was once located adjacent to the station, which opened in 1906. In fact, the station itself was initially the brewery’s transportation hub. The brewery, in turn, was named for the Japanese god of fishermen and luck, Ebisu-sama. One of Japan’s Seven Lucky Gods, you’ll find his likeness in statues outside the station.

Will your next Tokyo adventure take you through Ebisu Station? Use this handy guide to learn everything you need to know about utilizing Ebisu Station and enjoying its environs.

The Japan Rail Pass helps foreign travelers use Japan’s extensive railway system as an affordable and efficient means of transportation. Ebisu Station is home to a number of lines covered by the JR Pass. These include:

These lines are accessed from two island platforms that together serve four tracks.

You can use track one to take the Yamanote Line to Ikebukuro Station, Shibuya Station, or Shinjuku Station; track two to access Shinagawa, Tokyo, and Ueno Stations.

Interestingly, this station has a unique melody known as “The Third Man Theme” or the “Ebisu Theme,” which is used to announce train departures. The melody was formerly used in television commercials for Ebisu beer.

Platform one serves trains bound for Naka-Meguro, and platform two the trains to Roppongi Station, Ginza, Ueno, and Kita-Senju Stations. The latter also serves the Tobu Skytree Line for Kuki and Minami-Kurihashi Stations. Tokyo Metro trains are not covered by the JR Pass.

You will find the Tokyo Metro Station on the west end of Ebisu’s first floor. Restrooms, shops, a ticket office, and coin lockers are also found at this level.

Things to do near Ebisu Station

The neighborhood around the station is known by locals as a place to relax, eat a meal, and enjoy art. It’s a great place to visit after sightseeing in nearby Shibuya.

The Yebisu Beer Factory for which Ebisu Station was named closed in 1982. The area has since been redeveloped into the high-rise complex known as the Yebisu Garden Place. This commercial complex is home to shops, a movie theater, a hotel, and more. It has been called a “city within a city.”

Connected directly to the station is the Arte Ebisu shopping center. There, you’ll find fashion, cosmetics, sweets, and souvenirs in a less crowded environment.

Within the Yebisu Garden Place is the Tokyo Photographic Art Museum, which has three exhibitions spanning as many floors. Or, you can learn about a century of brewing at the admission-free Museum of Ebisu Beer. Samples are available in the tasting salon for 400 yen.

The Yamantane Museum is located ten minutes from Ebisu Station. It specializes in Japanese art, with nearly 2,000 pieces on display.

There are restaurants galore within walking distance of Ebisu Station. If you’d like to try the famous Ebisu beer, stop in at Beer Station Yebisu, where you can sample seven different varieties. The building also hosts a free observatory on the thirty-eighth floor with views of Tokyo.

Three minutes from the station is Ebisu Yokocho, a cluster of twenty izakayas, or informal Japanese pubs. You can sample Japanese culinary staples like teppanyaki, yakitori, and oden. You can also indulge in karaoke and Japanese drinking culture.

Foodies with a sweet tooth should not neglect a visit to Blue Seal, an Okinawan ice cream shop with only eight locations outside of Okinawa. Or, sample unique ramen flavors at Afuri.