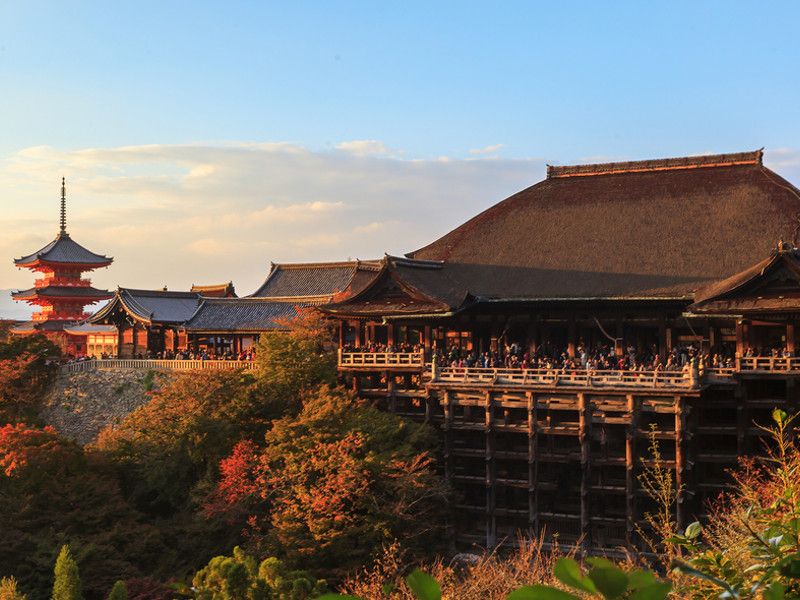 Since 1994, the Kiyomizu-dera has been included on the list of UNESCO World Heritage Sites. Wondering what to see on your visit to Kiyomizu-dera? Use this travel guide to map out your adventure, and you’ll discover some interesting facts along the way.

How to Get to Kiyomizu-dera

The best way to get to Kiyomizu-dera from Kyoto Station is taking the number 100 or 206 Bus at Kyoto Ekimae Bus Stop, just in the north exit of Tokyo Station. The bus ride is about 15 minutes (4 stops, 230 yen) to Goyo-zaka Bus Stop. From there, it is a 10 minute walk to Kiyomizu-dera temple.

Use your Japan Rail Pass to travel to Kyoto Station if you want to visit Kiyomizu-dera from Osaka.

The Kiyomizu-dera Temple is open daily from 6 am to 6 pm; closing time is extended to 6:30 pm on certain days during the summer, and until 9 pm during the night illumination.

What to see in Kiyomizu-dera temple

As you approach the Kiyomizu-dera, you will traverse the streets of the Higashiyama District, whose shops have served temple pilgrims for centuries. You’ll find local delicacies, souvenirs, and Kiyomizu-yaki pottery.

Within the main hall, you will find this temple’s primary object of worship: a statue Kannon, the goddess of mercy and compassion, bearing eleven faces and a forty-two arms.

A wooden stage or terrace is connected to the main hall. At 13 meters (43 feet) above the hillside, the terrace offers a view of Kyoto and the surrounding terrain. During the Edo period, it was believed that if you survived a jump from the terrace, your wishes would be granted. Interestingly, both the main hall and the terrace were built without the use of nails.

At the base of the main hall is the Otowa Waterfall, whose waters are divided into three streams. Each is said to bring a benefit to those who drink from it – long life, success at school, and success in love, respectively. Visitors can use cups with long handles to capture the water of their choice, but drinking from all three is considered greedy.

Behind the main hall is the Jishu Shrine, which is dedicated to a deity of love and matchmaking. Two “love stones” stand at the front of the shrine; it is said that if you are able to traverse the 18 meters (60 feet) from one stone to the other with your eyes closed, you will have luck in finding love. If someone must guide you, you will need a matchmaker or intermediary to help.

Also on the grounds are the smaller Okunoin Hall, halls dedicated to the historical Shaka and the Amida Buddha, a three-storied pagoda called Koyasu Pagoda that is said to bring about safe childbirth, and a small hall dedicated to Jizo, said to be the protector of both children and travelers. This hall holds over 200 small statues.

Just outside of the temple grounds are other historic structures to explore. One of these is the Zuigudo hall, dedicated to the mother of Buddha. It has a dark basement meant to symbolize a mother’s womb.

It should be noted that the Kiyomizu-dera has been under renovation since February 2017. Until renovations to the roof are completed in March 2020, the main hall will be covered with scaffolding. However, visitors will still be permitted inside the main hall during renovations.

Visitors to the Kiyomizu-dera delight in the cherry trees that blossom each spring and the blazing foliage of maple trees in the fall. If you visit the temple after dark, however, the twice-yearly night illumination will paint yet another perspective.

Along with other nearby shrines and temples, the Kiyomizu-dera is illuminated during the Hanatoro event held each year in mid-March. The temple is also illuminated in the second half of November, during the koyo autumn leaf viewing season.

What is the Seiryu-e dragon festival? Seiryu-e is one of the newest festivals on the Japanese calendar. It has only been celebrated since 2000 but that doesn’t make any less fun and fascinating.

The festival is held every spring and autumn to honor Seiryu, a blue dragon who is one of the four divine god-beasts and an incarnation of Kannon. Seiryu is said to protect Kyoto’s east borders against potential disasters and bad luck and the city now honors him.

The 18m-long dragon appears with three armoured men and they dance through the city along with a procession. The celebrations are visually spectacular and include music.

Where is the festival? The dragon apppears from Kiyomizu-dera and continues through Okunoin hall and temple grounds.

When is the festival? There are two a year, one in the spring and one in autumn. The schedule starts at 2 pm and ends at 3:30 pm. There is no entrance fee.

The Kiyomizu-dera Temple is among Kyoto’s top attractions. With your JR Pass in hand, you are ready to explore this and all that Japan has to offer.