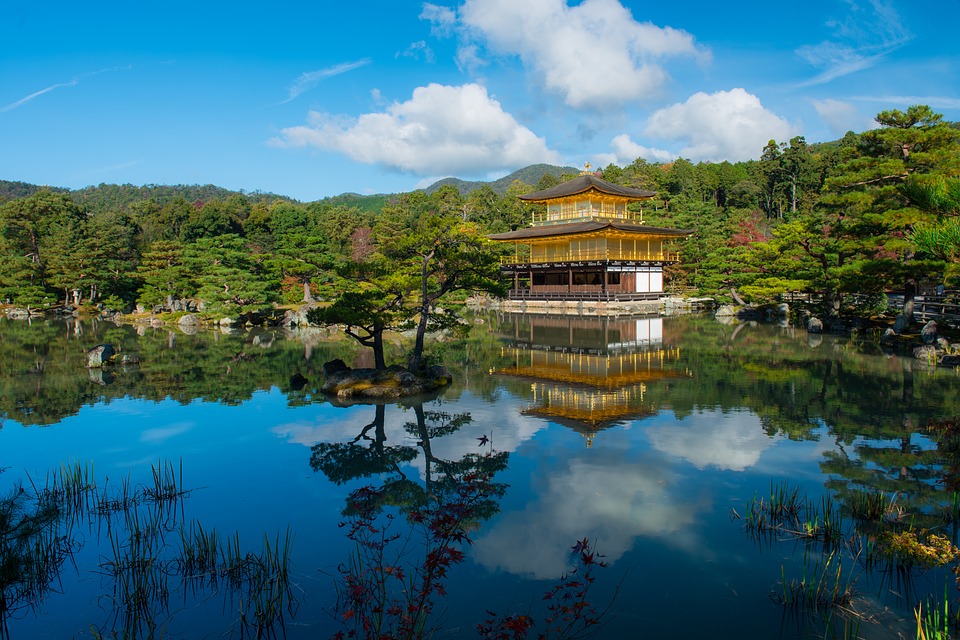 Kinkaku-ji is known as “the Golden Pavilion” for a very special reason – its top two stories are actually covered in gold leaf. Its shining surface reflects into the kyoko-chi, or Mirror Pond. Stationed at the foot of Kinugasa Hill, the temple grounds are wooded and present a lovely place for strolling and meditation.

The temple grounds are esteemed for their beauty year-round. Chinese motifs are apparent in the garden, and the grounds are especially stunning when decked in red autumn foliage or blanketed with winter snows.

When visiting Kinkaku-ji, you will enter through the Chumon Gate, strolling a path shaded by pine and maple trees. The temple building displays both Heian Period shinden architecture and bukke samurai style architecture, as well as that of a Chinese Zen Hall. Statues of Buddha, Yoshimitsu (the temple’s founder), and other Buddhist icons can be seen inside, and a bronze phoenix statue perches on the roof.

In the Upper Garden near the rear gate, you will find a small temple dedicated to the Buddhist deity Fudo Myo-o. Also on the grounds are a pond that is said to never dry out, and statues at which people throw coins for good luck.

You can also enjoy the Sekkatei Teahouse, an Edo Period addition to the temple complex. Beyond the temple grounds exit are souvenir shops and a tea garden.

The original structure of Kinkaku-ji was erected in 1397. It adheres to the Shoku-ji branch of Rinzai Zen, founded by Muso Soseki during the Muromachi Period. The building itself was first a villa owned by court noble. Later, it was used as a retirement home by a well-known shogun. Finally, at his request his son converted the structure into a Zen temple, naming it Rokuonji. This temple was destroyed several times by the fires of wartime. A similar temple, the Ginkaku-ji or Silver Pavilion, was built by the shogun’s grandson on the other side of Kyoto a few decades later.

In 1950, Kinkaku-ji was burned to the ground by a disgruntled young Buddhist monk. This event and the temple itself served as the setting for Yukio Mishima’s 1956 novel, The Temple of the Golden Pavilion.

How to get to Kinkaku-ji

Kinkaku-ji is a short walk north from the Hirano and Waratenjin Shrines. Bicycling is recommended if you would like to tour Ryoanji, and Ninnaji Temples in addition to Kinkaku-ji.

Walking less than 5 minutes from Emmachi Station, you can get on bus #205 at the Nishinokyo Enmachi bus stop that will take you to the Kinkaku-ji bus stop.

Kinkaku-ji is open daily from 9 am to 5 pm. Admission is ¥400 for adults and ¥300 for children. Access to the inside of the temple is not permitted, but you may enjoy the gardens and views of the temple from the outside.

Numerous other temples, shrines, and historic sites are located within walking distance of Kinkaku-ji. These include Ryoanji Temple, Tojiin Temple, and Ninnaji Temple. Walk to the south and you will find Hirano Shrine and Kitano Tenmangu.

To the east of Nishioji Station, accessed via the JR Kyoto Line, is a bicycle rental shop. You will also find Japanese and European style restaurants as well as a public bath.

The Kyoto Museum for World Peace and the Domoto Museum of Fine Art are also located a short distance away. From the JR Kintetsu Kyoto Station, take city bus #50 to the Ritsumeikan Daigaku-mae bus stop. The museums are located two blocks south of the bus stop.

If your travels are taking you to Kyoto, start planning your visit to Kinkaku-ji today. You’ll be able to travel quickly and easily using your Japan Rail Pass.