JRailPass.com » Japan Travel Blog » Travel Guides » Earthquakes in Japan: What to know before you go 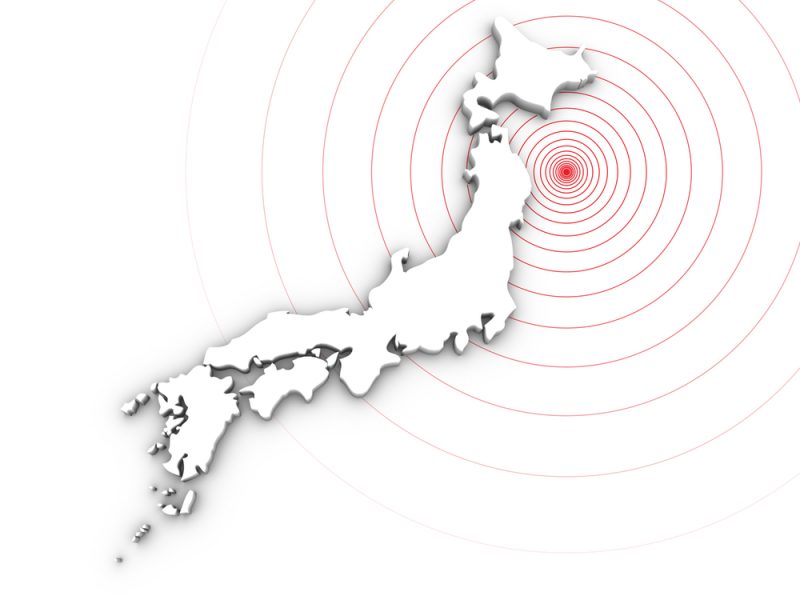 Because of its location, Japan is frequented by natural disasters such as earthquakes. If you’re traveling to Japan, there is no need to fear – simply get the facts. The following information is designed to help you stay safe in the event of an earthquake, at home or abroad.

The islands of Japan are located where four of the Earth’s tectonic plates converge. The country is also home to about ten percent of the world’s active volcanoes.

This means that Japan experiences more earthquakes than just about anywhere else – around 1,500 per year. Japan’s long list of earthquakes dates back over a thousand years.  Also, when earthquakes occur below or near the ocean, they may trigger tidal waves (called tsunami).

In addition to the magnitude scale with which many travelers are familiar, Japan also uses a 10-step intensity scale. This scale will help you to understand the intensity of the shaking felt at a given location.

A zero means that no shaking can be felt. You may barely notice a one, and a two could cause suspended objects to shake. A three could cause objects to move or vibrate, and a four will rattle the windows. Five and above are likely to cause structural damage, and a seven and above results in widespread devastation.

Looking for news about the latest earthquake activity? Check the Japan Meteorological Agency updates on https://www.jma.go.jp/en/quake/

Because of its history of earthquakes, Japan is well prepared for this type of event. All Japanese cell phones come with an earthquake alert system, potentially giving users a 5 to 10-second window to seek shelter before the quake strikes. Earthquake resistant houses and buildings are designed to move with the quake, rather than collapsing or injuring those inside.

Japan also hosts an integrated disaster prevention system. The government has issued extensive guidelines which include assembling an emergency kit in advance of a disaster. Training sessions and exhibitions are common, and participation in natural disaster drills begins in kindergarten. Local evacuation centers and full emergency facilities are available to serve the public.

What to Do During an Earthquake

One reason Japan is so safe despite large numbers of earthquakes is that the people who grew up there know how to react when an earthquake occurs. If you’re traveling to Japan, you should educate yourself as well.

One way to do this is by downloading an earthquake early warning app, such as Safety Tips or Yurekuru. Just a few seconds of warning can help you stay safe and calm. Then, consider the following tips on what to do in each situation.

Take shelter under a sturdy object, such as a doorway or piece of furniture. If these protections are not available, cover your head with a pillow or a jacket. Stay away from windows or from objects that might fall off the walls. Don’t move until the earthquake is over, and don’t go outside. Falling debris is a bigger risk out of doors.

Interestingly, during quakes of five or greater on the Japanese scale, the utility company automatically turns off the gas lines. So if you are cooking when an earthquake strikes, there is little danger of fire from broken gas lines.

If you are already out in the open when an earthquake begins, try to find an open space where objects will not fall on you. Buildings, block fences, vehicles, and slopes pose the greatest risk. Crouch down on the ground and cover your head with your arms, jacket, or satchel.

In a Tall Building

Do not evacuate the building until the shaking stops. Rather, stay away from the windows and cover your head, as you would in a home. Don’t use the elevators, as they may lose power. Stay calm and don’t panic.

In an Elevator or on an Escalator

If you are in an elevator when an earthquake begins, don’t try to reach your destination – get out as soon as you can. Some elevators are designed to stop at the nearest floor once shaking is detected. Push the button for every floor to ensure that the elevator will stop quickly. If it becomes stuck, push the emergency call button and wait for help. You can also call emergency services on your cell phone. The number in Japan is 119.

Parts of many Japanese train stations and shopping centers are located underground. If an earthquake occurs, stay away from windows, shelving, or large signs. Cover your head with your hands, jacket, or satchel. Walk along the wall until you reach the exit, and exit the building.

Japan’s rail system is designed for safety. If significant shaking is detected, the train will stop automatically. If seated, grasp your belongings so they will not become a hazard to others. If standing, hold tightly to a handrail, bar, or seatback so you will not fall down. Cover your head with your hands or belongings. Listen to the instructions of the railway staff. Do not try to get off the train unless told to do so.

Another beneficial tip for any situation is to follow the example of the locals. They have been taking part in earthquake drills at school and at work for most of their lives. Also, evacuation orders may be given only in Japanese. If the area you are in is being cleared of people, don’t hang around – follow the crowd to safety.