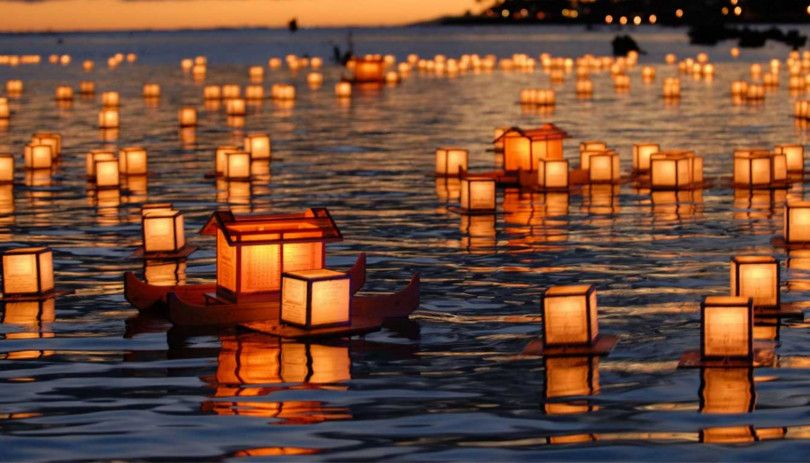 The Obon festival (お盆, also known as Bon festival) is an annual Japanese holiday that commemorates and remembers deceased ancestors. It is believed that their spirits return at this time to visit their relatives.

Chochin (paper) lanterns are hung to guide the spirits and Obon dances (bon odori) are performed. Families have reunions and visit the graves of their relatives and make food offerings at altars and temples.

The official dates are August 13-15 though it will be celebrated between July 13-15 in some places. The Obon week in mid-August is one of Japan’s three major holiday seasons making it one of the busiest times of the year for traveling. Many Japanese people will leave their cities around August 10 and come back on August 17-18.

On the first day of Obon, people take the chochin lanterns to the graves of their families. They call their ancestors’ spirits back home in a ritual called mukae-bon. In some regions, huge fires are lit at the entrances of houses to guide the spirits to enter.

At the end of the Obon festival, families help their ancestors’ spirits return back to the grave by guiding them with their chochin lanterns. The ritual is called okuri-bon. Again, the ritual varies slightly between different regions of Japan.

In recent years, floating lanterns (toro nagashi) have gained in popularity. The beautiful lanterns float down a river that runs to the sea to symbolically send their ancestors’ spirits into the sky, although customs vary from region to region.

The style of the traditional Bon Odori dance varies from region to region but it is normally based around the rhythms of Japanese taiko drums.

Dancers perform on a yagura stage and participants wear light cotton kimonos. Anyone can join in the dances which are held in parks, temples, and other public places around Japan.

There are a number of special Obon festivals which tourists can visit using their JR Pass. The Daimonji Festival in Kyoto is probably the most famous. A series of spectacular, 200m-long, character-shaped bonfires are built on mountainsides that are visible throughout the city. Each one is then individually set on fire.

For those who love to dance, the Gujo Odori Festival In Gujo, (Gifu prefecture) is a week-long party where dancers perform each night from 8 pm until 5 in the morning. Over 1.3 million tourists go there each year.

At the other end of the spectrum, if you’re looking for a small festival that has preserved ancient traditions, there is the Hokkai Bon Odori. It is also the birthplace of one of the most famous Japanese traditional songs.

The origins of Obon

This Buddhist festival has been celebrated for more than 500 years. It originates from the story of Maha Maudgalyayana (Mokuren). He was a disciple of Buddha who used his powers to see the spirit of his deceased mother. He discovered she had fallen into the Realm of Hungry Ghosts and was suffering.

Buddha advised Mokuren to make offerings to Buddhist monks. On the 15th day of the 7th month, he followed Buddha’s advice and his mother was released from her suffering. Mokuren danced with joy which is the origin of the Obon dance.