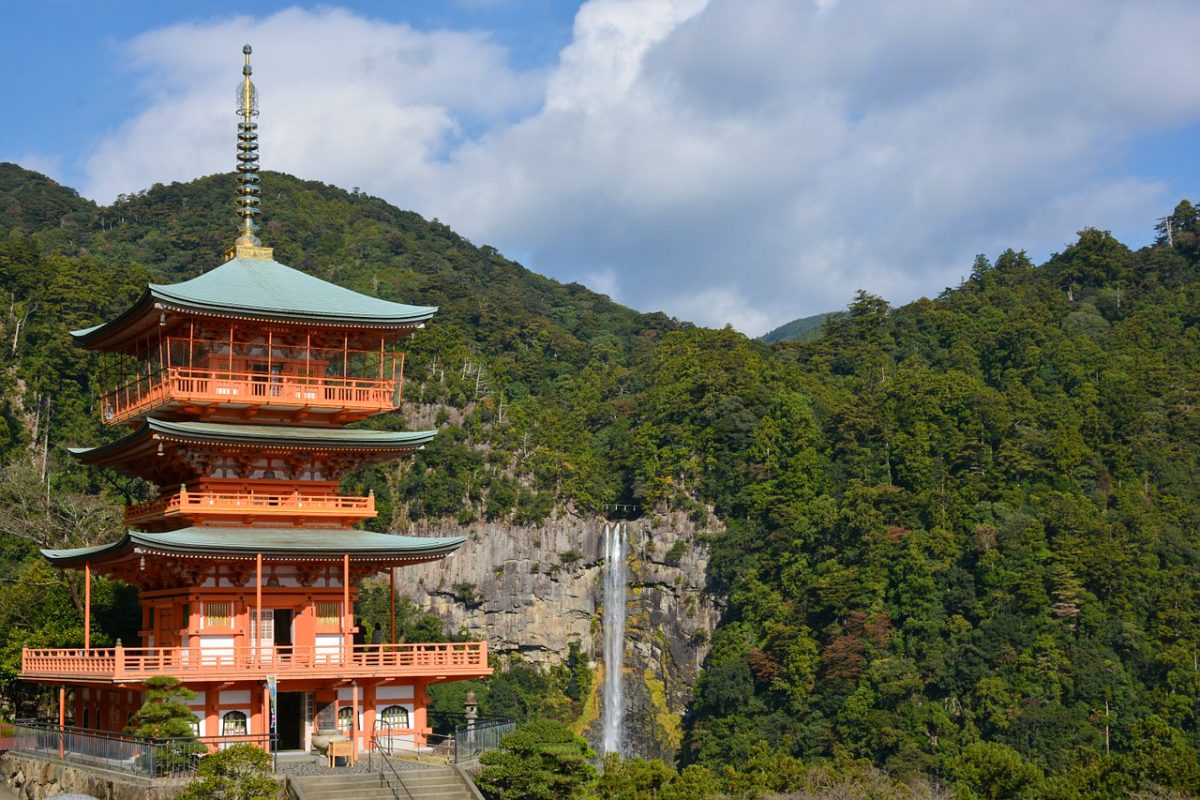 The world over, national parks are popular tourist destinations. What is a national park? By one definition, it is “a park in use for… the conservation of ‘wild nature’ for posterity and as a symbol of national pride.” Japan is home to 33 national parks in addition to 50 similar parks.

Japan’s first national parks were dedicated in 1931. These parks allow you to experience the full range of the country’s rugged beauty—beaches, forests, mountains, and volcanoes—with locations ranging from the cool northern reaches of Hokkaido to the subtropical islands of Okinawa.

So, are you in the mood for a bit of whale watching? Hiking? Scuba diving? Perhaps you dream of experiencing Japan’s iconic hot springs. National parks allow you the opportunity to do all of these things, and more. Check out our top picks and begin planning your next trip with the Japan Rail Pass. 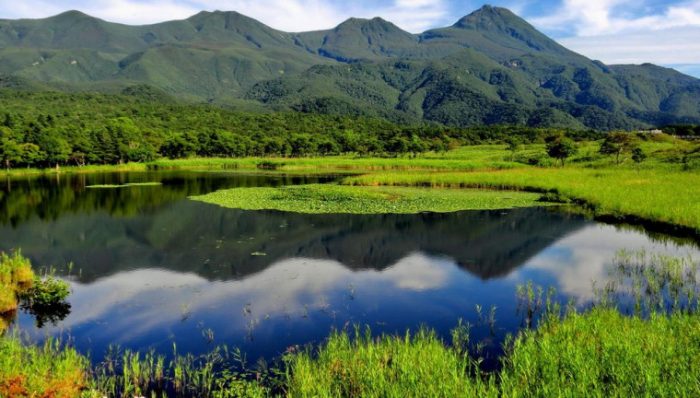 This northern park on the island of Hokkaido is considered a UNESCO World Heritage Site. One of the highlights of this park is the large population of brown bears. During the summer months, bear watching from sightseeing boats is a popular activity. In the winter, rare drift ice is visible. Roads cover only one-third of the park; the remainder is reserved for those adventurous enough to explore by boat or on foot.

How to get there: The nearest train station to the park is Shiretoko Shari Station, which can be reached using the Japan Rail Pass from either Abashiri Station or Sapporo Station. Buses are available for the remainder of the journey during peak tourism seasons, but a rental car, available at the train station, is recommended.

Located in the Tohoku Region, this park is centered around the Hachimantai mountains and Lake Towada. Within its borders are rustic onsen, or hot springs. In autumn, it is a prime viewing location for Koyo, or viewing colorful leaves.

How to get there: From Tokyo Station, take the JR Akita Shinkansen to Tazawako Station. Trains run hourly and the trip lasts around three hours.

Located near Tokyo in the Kanto region, Nikko is among Japan’s most popular destinations. It is a UNESCO World Heritage Site, home to historic shrines—including Toshogu, the most decorated shrine in Japan—and natural wonders such as onsen and waterfalls. This park makes a good day trip or overnight trip from Tokyo.

How to get there: From either Tokyo Station or Ueno Station, take the JR Tohoku Shinkansen to Utsunomiya Station. There, transfer to the JR Nikko Line to Nikko Station. The trip takes between an hour and a half and two hours. 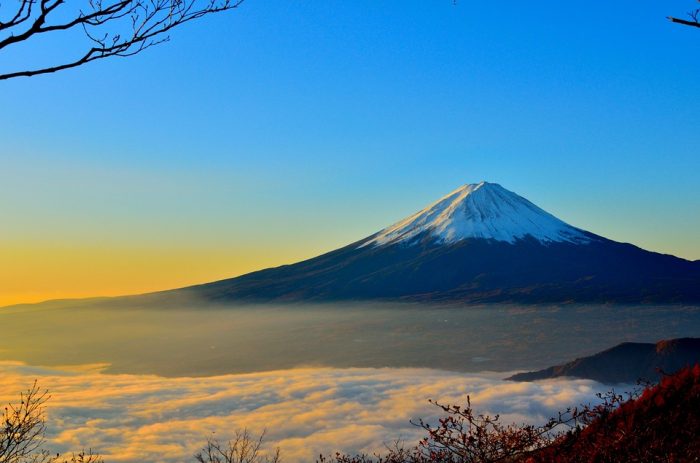 Fuji is, without a doubt, the most popular national park in Japan. The majestic and iconic Mount Fuji, an active volcano, oversees activities ranging from mountain climbing to sunbathing on sandy beaches, to relaxing in a peaceful onsen.

How to get there: From Shinjuku Station in Tokyo, take the JR Chuo Line to Otsuki Station. There, transfer to the Fujikyu Railway Line to Kawaguchiko Station. This trip takes just under three hours.

This park in the Kansai region is home to two UNESCO World Heritage Sites, Mount Yoshino and the Kumano Region. Mount Yoshino, home to more than 30,000 cherry trees, is the most famous cherry blossom viewing location in Japan.

How to get there: From Tennoji Station in Osaka, take the train to Oji Station, where you will transfer trains and continue to Yoshino-guchi Station. Then, transfer again to the Kintetsu Yoshino Line Yoshino Station. This final transfer is not covered by the JR Pass. The journey takes about one and a half hours.

One of Japan’s oldest national parks, Aso offers dramatic scenery of volcanic steam rising above stark tans, oranges, greys, and reds, the product of the active volcano Mount Aso, and others in the Kuju Mountains. Hiking the volcanic craters is a popular activity. Due to the volcanic activity, several hot spring towns are located just outside the park.

How to get there: From Kumamoto Station, take the Hohi Main Line to Aso Station. Buses are available from the station to various regions of the park. 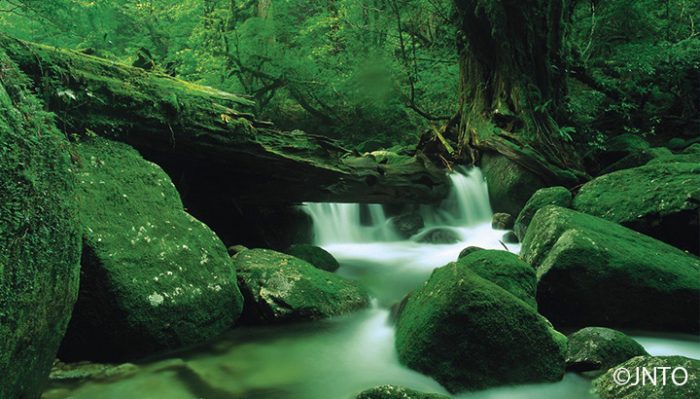 This park is located on an island south of the Kagoshima Prefecture. This heavily forested, subtropical island surges with life. It is home to species of deer and monkey found nowhere else, as well as cedar trees that are more than 1,000 years old. One such tree, the Jomonsugi, may be 7,200 years old!

How to get there: You may make a direct flight from Osaka’s Itami Airport to Yakushima. Alternatively, boats and ferries depart from Kagoshima, typically every one to three hours. Depending on the speed of the boat, the trip may last between two and four hours.

A beachgoer’s delight! This park spans several tropical islands and the underwater habitats between them. Scuba diving, snorkeling, swimming, and beach activities are popular. The adventurous traveler can even kayak a true jungle river lined with mangrove trees.

How to get there: From Tokyo’s Haneda Airport, take a direct flight to the New Ishigaki Airport.

This park in Hokkaido is home to Japan’s largest marsh and wetland habitat. It accommodates the rare Japanese crane, a large bird known only in this specific area. In winter, the cranes are easily observable at observation centers and feeding locations.

How to get there: From Sapporo Station, take the JR Super Ozora Limited Express to Kushiro Station. The trip takes approximately four hours. 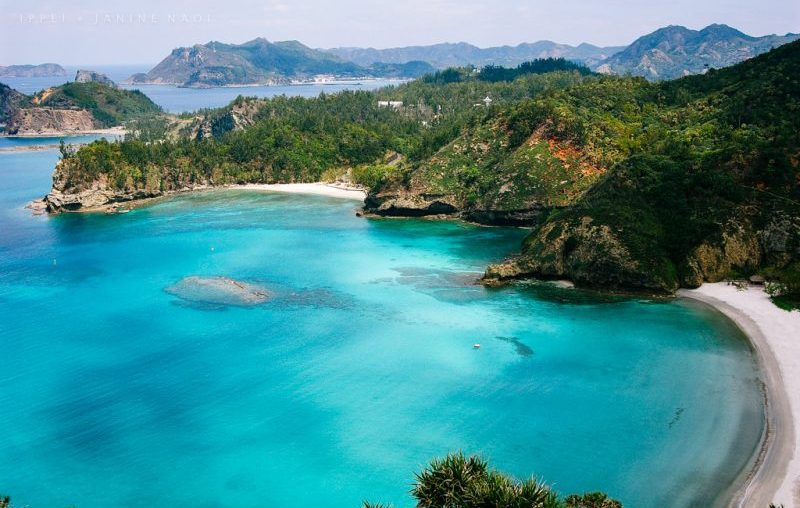 The Ogasawara Islands also know as Bonin Island are a UNESCO World Heritage Site 1,000 kilometers south of Tokyo, in the Pacific Ocean. These subtropical islands are home to a number of plant and animal species found nowhere else in the world. Dolphin and whale watching are popular activities, as well as kayaking and scuba diving in the warm coastal waters.

How to get there: The Ogasawara Islands can only be reached by taking the once-weekly ferry from Tokyo. The ferry ride lasts approximately 24 hours.

Which of Japan’s vast and beautiful national parks will you visit? The choice is yours. Don’t forget to book your JR Pass to ensure ease of travel to all of your favorite destinations.