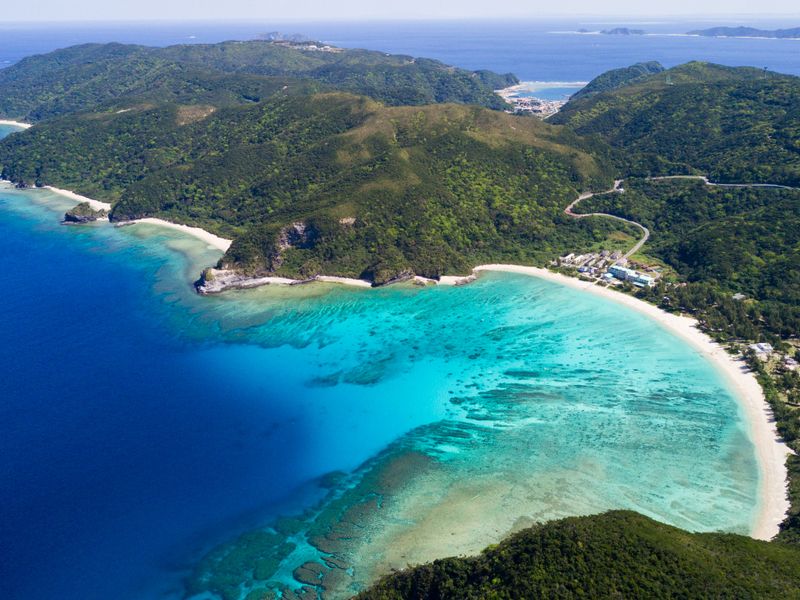 Okinawa Prefecture consists of more than 150 distinct islands, all of which lie 400 miles from mainland Japan. This sets Okinawa apart as a world unto itself.

In Okinawa, you can explore deserted beaches, swim with sea turtles, or snorkel in crystal clear waters. One hundred and eleven of Okinawa’s islands are uninhabited, pristine and untouched, making them prime real estate for adventure. Okinawa is home to rare creatures, such as the Iriomote wild cat, and cuisine unique and different from the rest of Japan.

Whether you’ll be reclining in an all-inclusive resort, or whether backpacking through campgrounds and hostels is more your style, Okinawa offers something for every traveler on every sort of budget. Dive in to this travel guide and discover the many ways in which the islands are calling you.

Okinawa is a region rich in history. For centuries, the islands’ diverse people – who may have originated in China, other parts of Asia, or Australia – were united under the Ryukyu Kingdom. By the 15th century, this kingdom had become an economic power. The islands were later invaded by a clan from the Japanese mainland, and officially became part of Japan during the 1800s.

During World War II, Okinawa was invaded by allied forces. The civilian population was decimated, as was the island’s infrastructure and cultural relics. This battle became known as tetsu no ame, or “typhoon of steel.” Echoes of this hardship are present throughout the prefecture. Yet, like a polished precious stone, Okinawa shines brightly despite these historically recent hardships.

How to get to Okinawa

Most travelers to Okinawa do so by air. Okinawa’s primary airport of Naha is located on Okinawa Main Island, or Okinawa Honto.

Traveling from Osaka to Okinawa, via Kansai International Airport, takes about 2 hours. The flight to Naha from Osaka may cost you about $110 USD.

Alternatively, ferries depart for Okinawa from Kagoshima three to four times weekly. The boat trip takes about 26 hours, with prices ranging from ¥15,000 (about $130.00 USD) for fare with no sleeping accommodations, to ¥37,000 (about $330.00 USD) for first class service with bedding.

Peak seasons for travel to Okinawa are during holidays such as Golden Week (late April to early May) and during the month of August. Tickets during these peak seasons sell out quickly and are more expensive than at other times. Special airfare passes are available to foreigners taking domestic flights in Japan such as Japan Explorer Pass. These may reduce round-trip airfare to Okinawa to $115.00 US, or even less.

Okinawa is an archipelago formed by several islands:

Unlike the main islands of the Japanese archipelago, in Okinawa there are not as many transportation options or as convenient as the Shinkansen or other trains, so getting around in Okinawa will be somewhat more complicated. We recommend, to explore Okinawa several days, rent a car (remember that in Japan you drive on the left side of the road).

In any case, if you arrive to Okinawa from Naha Airport, you can get to Naha City using the Yui Rail, a monorail that will take you directly from the airport to the city.

You will also find other means of transportation such as taxis and buses, and there is also the possibility of renting motorcycles and bicycles.

Things to do in Okinawa

Packed with beaches and tropical forests, what is there not to do in Okinawa? Hiking, snorkeling, and scuba diving make the short list, but Okinawa has even more to offer.

If Okinawa’s diverse wildlife isn’t enough for you, you can visit the Churaumi Aquarium, considered the best aquarium in Japan and one of the best in the world. A highlight is the Kuroshio Tank, one of the largest fish tanks in the world, which houses the massive whale shark – the largest extant fish in the world. You’ll also enjoy hands-on starfish exhibits; dolphin, sea turtle, and manatee shows; large-scale coral reef exhibits; displays of deep-sea bioluminescent fish; and more. 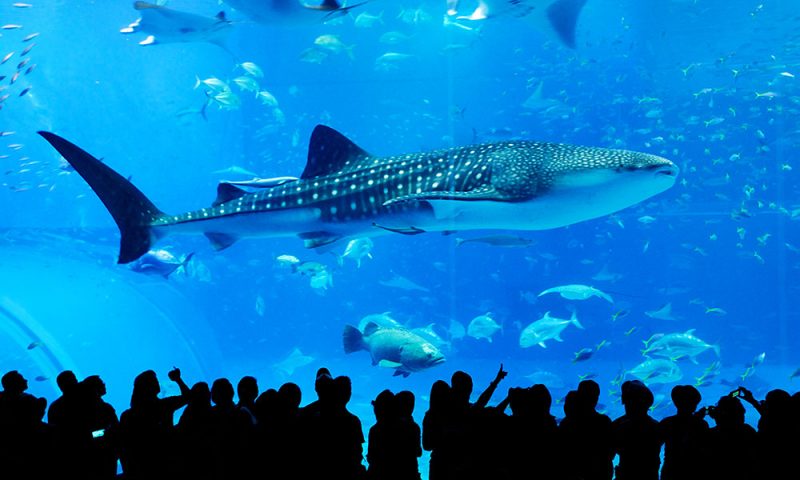 A favorite historical site is the Okinawa Prefectural Peace Memorial Museum and Park, where you can honor the memory of those lost in the Battle of Okinawa. The sobering museum chronicles what led up to the battle, the battle itself, and the subsequent reconstruction.

The Shuri Castle, located in Naha, was built during the 14th century. It was used as a residence by the royal family of Ryukyu Kingdome becoming the political, economic and cultral heart of the Ryukyu Islands for 450 years. It has been destroyed and rebuilt several times throughout its history, most recently during World War II. In 1992 it was reconstructed for the last time in its original site.

Warm ocean currents facilitate some of the most diverse coral reef ecosystems in the world. The islands are divided into three major groups – the Okinawa Shoto which surround the Main Island, the Miyako Retto Islands, and the Yaeyama Retto Islands.

If you need an escape, the sands and shores of Okinawa are waiting for you. Book your JR Pass and start planning your next international adventure, today.