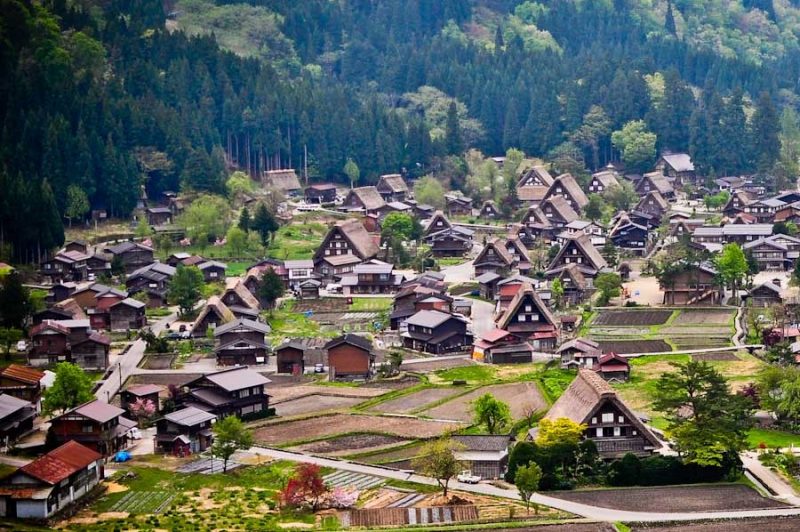 Picture a quaint village embanked in snow. Icy whiteness covers the ground and clings to the roofs of the traditional Japanese farmhouses like icing on a gingerbread house. Streets and windows become golden torches as the sun begins to set.

The Historic Villages of Shirakawago and its neighboring village, Gokayama are one of central Japan’s UNESCO World Heritage Sites.  They hold a serene natural beauty as well as a unique architecture.

The homes have uniquely steep thatched roofs known as gassho-zukuri in Japanese, meaning “constructed like hands in prayer.” Many of the houses were built in the late 1600s and were designed to withstand heavy snow, and the large attic space provides an area for silkworm cultivation.

How to get to Shirakawago

Shirakawago and Gokayama are situated in a valley in Gifu prefecture, 50 km northwest of Takayama. These villages are surrounded by high and rugged mountains which receive particularly high snowfall in winter.

Using your Japan Rail Pass, you can reach the Shirakawago area from Tokyo, Osaka or Nagoya. Buses are available from many other popular locations.

From Tokyo to Shirakawago

From Tokyo Station or Ueno Station, take the Hokuriku Shinkansen to Toyama Station. Then take the bus to Shirakawago (90 minutes, 1700 yen one way). You can check the timetables and make your bus seat reservation at Japanbusonline.com.

From Kanazawa to Shirakawago

The Nohi Bus and Hokutetsu Bus lines operate hourly between Kanazawa and Shirakawago. Seat reservations are required, and the JR Pass is not valid. However, other tourist passes may be accepted.

From Takayama to Shirakawago

Hourly buses operate between Takayama and Shirakawago. The JR Pass is not valid on these buses, and some require seating reservations.

From Nagoya to Shirakawago

From Nagoya Station, you can take the Hida Limited Express to Takayama, and then proceed as explained above.

Besides, several Gifu Buses operate daily between Nagoya and Shirakawago. The JR Pass is not valid on this bus, and online reservations can be made.

From Osaka to Shirakawago

From Osaka, you can take the JR ThunderBird Limited Express to Kanazawa. From Kanazawa, take the Nohi or Hokutetsu Bus to Shirakawago.

Alternatively, you can take the JR Tokaido Shinkansen from Shin-Osaka Station to Nagoya Station. Then, take the Gifu Bus from Nagoya to Shirakawago.

Shirakawago is divided into two areas. In Gifu, it is known only as Shirakawago. In Toyama Prefecture, it is called Gokayama. Villages in both areas have been listed among the UNESCO World Heritage Sites since 1995.

The village of Shirakawago is the most famous in the Shirakawago region, as it is home to most of the traditional gassho-zukuri houses, which are based on their own building structures according to their regions characteristics.

Gokayama is located 10 kilometers north of the village of Shirakawago. Its name means “five valleys” in Japanese, describing its position between mountains. Gokayama is famous for gunpowder production. Today, it offers a pristine and untouched environment to travelers lucky enough to find it.

Gokayama is home to two gassho-zukuri style villages. About 60 people still live in the 23 houses of Ainokura Village. There, you can eat a meal and learn to make paper. The Suganuma Village is home to nine gassho-zukuri houses, the Ensho-no-Yakata gunpowder production museum, and the Shinmeisha Shrine.

Between these villages, you will find the largest gassho-zukuri house, the Murakami House. You can enter the house and view over a thousand artifacts. Catch a meal at the nearby Jippensha, where you can sample Gokayama’s famous soba noodles and tofu bean curd.

Shirakawago is a beautiful destination any time of the year and no matter the weather. In the spring, the area is crowned with clouds of sakura cherry blossoms.

In summer, the rice fields paint the terrain bright green. In autumn, its mountains and hills create a stunning backdrop for koyo autumn leaf viewing. And in winter, the area is thickly blanketed with snow, as described at the outset.

Best things to do in Shirakawago

The Ogimachi Village is popular as it houses many gassho-zukuri structures. The Wada House is well preserved, and enables visitors to take a peek inside. This house was constructed during the Edo Period, between 1603 and 1868. It is listed as an Important Cultural Property. Shuttle buses to local attractions can be accessed in front of the Wada House.

Shirakawa Kaido Street features souvenir shops and snack stalls. On one end of the street is a hot spring facility known as Shirakawago no Yu. Beyond the river that runs parallel to the street, you will find a Tourist Information Center that also inhabits a gassho-zukuri house.

Each year, during the months of January and February, Shirakawago’s gassho-zukuri houses are illuminated at night. This event is so popular that advance reservations are required. Please check the official website for schedules and lates information.