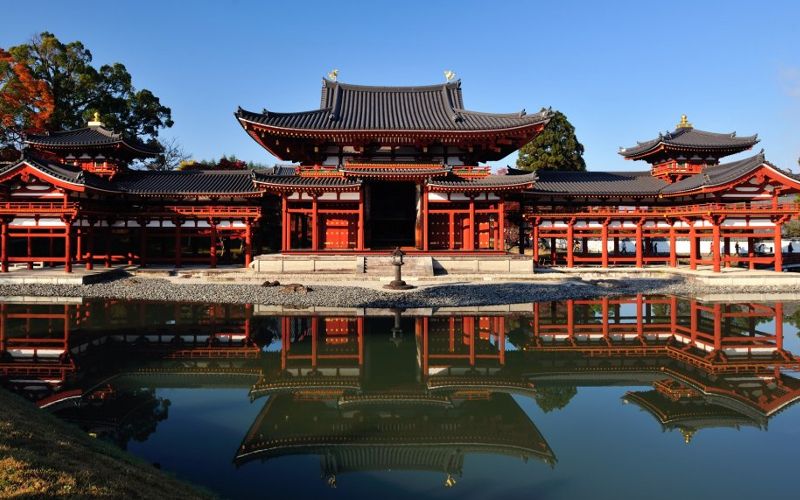 The site of the Byodoin temple was originally built in 998 as a countryside retreat for Fujiwara no Michinaga (a powerful politician). The temple was constructed during the Heian Period in 1053.

The Phoenix Hall is the most famous building in the temple. It was originally called Hoodoo but quickly took on the nickname “Phoenix Hall” as two phoenix statues are displayed on the roof. Inside you can see the impressive Amida Buddha Statue. The hall symbolizes the temple and has appeared on coins since 1951.

How to get to Byodoin temple

How to get there? There are two stations which are both a 15-minute walk from Byodoin: JR Uji Station and Keihan Uji Station. Kyoto and Osaka are nearest big cities which visitors often travel to Byodoin.

Getting to Byodoin temple from Kyoto

Kyoto and JR Uji Station are connected by the JR Nara line, the same line where are located the JR stations to get to Fushimi Inari and Nara. Frequent trains run and the journey only takes around 20 minutes (by rapid train) or 30 minutes (by local train). the JR Pass covers the trip, those without one need to pay 240 yen one way.

Getting to Byodoin temple from Osaka

Japan Rail Pass holders can take the rapid train along the JR Kyoto line from Osaka to Kyoto (in under 30 minutes) and then take the JR Nara line from Kyoto to Uji (as above).

The Keihan line also connects Osaka and Uji. From Osaka (Yodoyabashi and Kyobashi stations), the one-way trip takes about an hour and costs around 400 yen. This option is not covered by the Japan Rail Pass.

Opening hours: Byodoin Temple is open from 8.30am to 5.30pm. The entrance fee is 600 yen (for adults) although concessions are available for students, children, and groups.

What to see there

Visitors can see a range of national treasures in the Hashokan Museum. It displays a mixture of the temple’s most prized artifacts as well as multilingual displays on the site’s construction and history.

The temple garden (called “Jodo-shiki”) is another highlight. It is located just in front on the Phoenix Hall and has been classified as a national ‘historic site and place of scenic beauty’. Nearby visitors can enjoy Uji green tea in the Byodoin Tea Salon Toka.

The Yorin-an Shoin Residence includes some intriguing interior wall paintings by artists who belonged to Sansetsu Kano’s studio, the structure is also a sub-temple. The Kannon-do Hall is currently under renovation and not open to the public.

Aside from the Byodoin Temple, there are a number of other attractions to see in Uji. The small city is famous for its high-quality green tea and there are numerous tea shops you can visit. From Byodoin Temple you can quickly get to the Ujigami Shrine, the Uji River, and the Koshoji Temple. All of which are worth visiting.

The popular Mampukuji and Mimurotoji Temples are harder to reach. From the river they are about a 40-minute walk away. You can also catch a bus from the train station which is covered by the JR Pass.