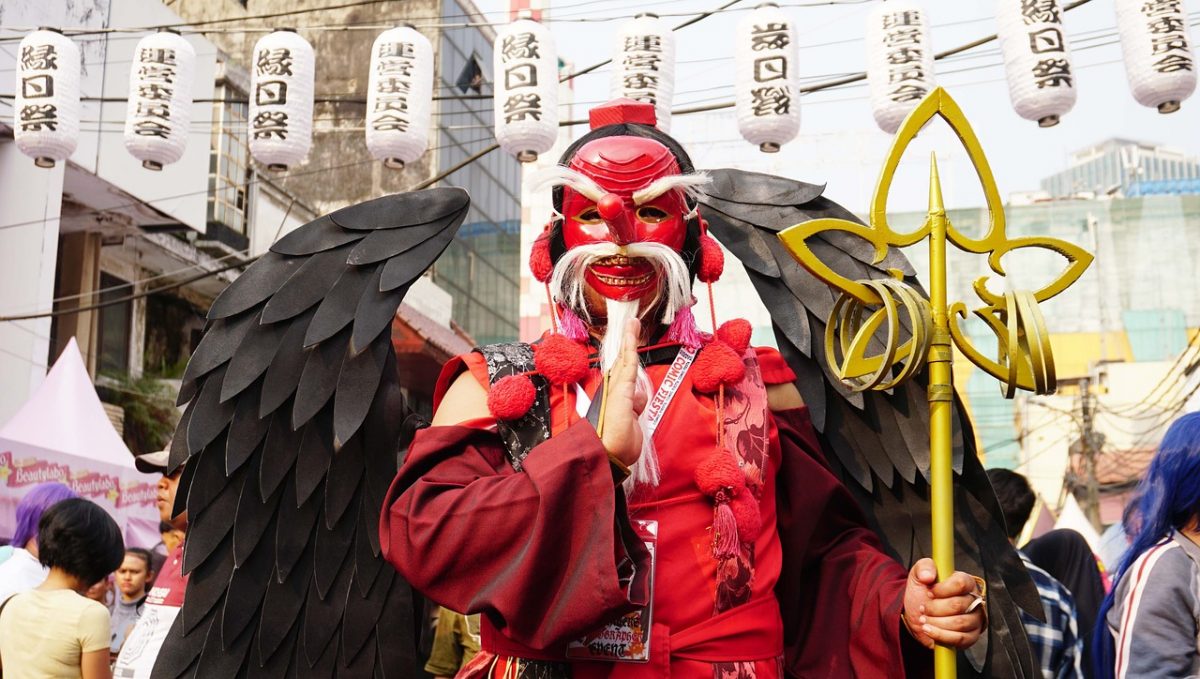 There are countless local festivals (祭り, matsuri) in Japan each year. They are all spectacular, extravagant, and fun but also unique. Each celebration is based around an individual shrine which pays tribute to a different deity or a famous historical event.

The celebrations vary greatly as each has features based upon the specific shrine but hey also have many similarities. Almost all of them involve energetic processions where thousands of people dance, chant, and dress up in special clothes.

Fleets of huge, breathtaking, colorful floats (omikoshi) parade through town centers and locals put up decorations. Some of the festivals also feature some incredible fireworks displays.

Street food is not as typical in Japan as many other countries in Asia. However, during matsuri festivals, the streets are lined with food stalls (yatai) selling special types of seasonal snacks with vary from festival to festival.

Though most matsuri festivals are held over the summer months, they take place in every season so they’re worth keeping an eye out for whenever you go to Japan. There are so many that picking the best ones if tough, but here are just a few of the most exciting matsuri festivals.

Where: The Yasukuni Jinja Shrine, Tokyo, near Kudashita Station.

What: The Gion Matsuri Festival dates back to the ninth century. It is famous for its floats, which may be 25 meters in height and weigh 12 tons. Thirty or more floats may be used, each representing a distinct neighborhood or corporation of Kyoto.

The wheels that mobilize the floats are often as tall as a person. During the height of the festival, traffic is barricaded from Kyoto’s city center to allow stands and yatai stalls containing food and games to be set up. Later, traditional neighborhoods are decorated with flowers, banners, and flags, and illuminated with lanterns. The famous parade begins at the Yasaka Shrine in Kyoto’s Gion district. The festival received the designation of “World Intangible Cultural Heritage” event in 2009.

When: The entire month of July; the most popular events occur on July 14 to 17.

Where: Near Yasaka Shrine, Kyoto (buses from Kyoto Station).

What: The Tenjin Matsuri is a boat festival that dates back 1,000 years. The festival is a tribute to arts patron Tenman Tenjin. Festivities involve upwards of 3,000 performers dressed in traditional attire of the 700’s through the 1100’s, who carry portable shrines, or omikoshi, through the city. One hundred boats also set out in procession; as evening falls, fires are lit aboard the boats as fireworks light the night sky.

Where: Near Temmangu Shrine in Osaka (next to Osakatemmangu Station).

What: The Sumidagawa is the oldest fireworks festival in the world, established in 1732. It celebrates hanabi, Japanese fireworks, and includes fireworks display competitions. The festival attracts one million attendees annually, many of whom dress in traditional yukata kimonos.

When: The last Saturday of July. In the event of rain, the festival will be cancelled.

Where: Tokyo, on the banks of the Sumida River, near Asakusa Station and district. Sumida Park is the most popular viewpoint.

What: Considered one of the top three Japanese festivals, the Nebuta festival has been designated as a “World Intangible Cultural Heritage” event. Each evening, parades of dancers carry illuminated floats. The parades last for hours, and on the final day of the festival, fireworks are lit as the floats are literally set afloat on the sea.

It is thought that this festival has its origins in the Tanabata Festival, which was appropriated from China during the 700’s.

What: This festival is a part of the Buddhist Obon rites, which bid welcome to the spirits of the dead. It is a holiday of family reunion when the spirits of ancestors are thought to visit household altars.

Having been celebrated for over 500 years, it is one of the most famous events in the country, and boasts of being the largest festival. Each evening, the streets are awakened to the sound of drums, shamisen – a traditional guitar-like instrument with three strings – and other instruments. Bon-Odori dancers wear straw hats and yukata kimonos.

Where: Tokushima, in the region of Shikoku.

What: Also known as the Festival of the Steel Phallus, this festival is considered one of the more “unusual” and “infamous” of Japan’s summer festivals. Its purpose is to raise money for HIV and AIDS research; therefore, its decorations, candy, and souvenirs are often “modeled after symbols of fertility.”

Where: Kawasaki, just south of Tokyo.

What? Sendai Tanabata Matsuri is one the most exciting events which visitors can enjoy during the summer months in Tohoku. The legendary festive atmosphere draws visitors from all over Japan as well as a growing number of foreign tourists.

Thousands of colorful streamers, which resemble brightly colored forests, decorate the town center. The streamers are around 4 meters long and are handcrafted by local shops, school children, and other members of the community. They are hung from long bamboo poles to create the stunning effect. The fireworks are also breathtaking.

Where? Downtown Sendai (JR Sendai is the nearest JR station).

What? Soma Nomaoi is a festival which celebrates the region’s horse-breeding heritage. An event called Kacchu Keiba is one of the festival’s highlights: 12 fully-armored samurai horsemen, carrying katana swords, race against each other over 1000 meters.

Another exciting event which features in the festival is Shinki Soudatsusen, where hundreds of samurai horsemen compete for 40 shrine flags that are shot into the sky using fireworks. These are just 2 of many events which feature in this unique festival which celebrates this important aspect of Edo heritage.

When? The last Saturday, Sunday, and Monday of July.

Where? This matsuri takes place in the Soma area of Fukushima Prefecture. The main event is held simultaneously in three important sanctuaries: Ota-jinja Shrine, Nakamura-jinja Shrine and Odaka-jinja Shrine.

What? The Fukagawa Festival is officially one of the Tokyo’s big 3 Shinto festivals, along with the Sanno Matsuri and the Kanda Matsuri (which all date back to the 17th century). Every 3 years there is an extra special festival called a “hon matsuri”, so the next ones are expected in 2023 and 2026.

The festival is centered around the Tomioka Hachiman Shrine (also known as the Fukagawa Shrine). Over 30,00 people participate in the annual parade in front of a crowd of over half a million who throw water at them to please the gods.

When? Around August 15th (dates change).

Attending one of more of these festivals will give you a glimpse into authentic Japanese culture. Don’t neglect to use your Japan Rail Pass to travel quickly, easily, and affordably between each of the festival locations.