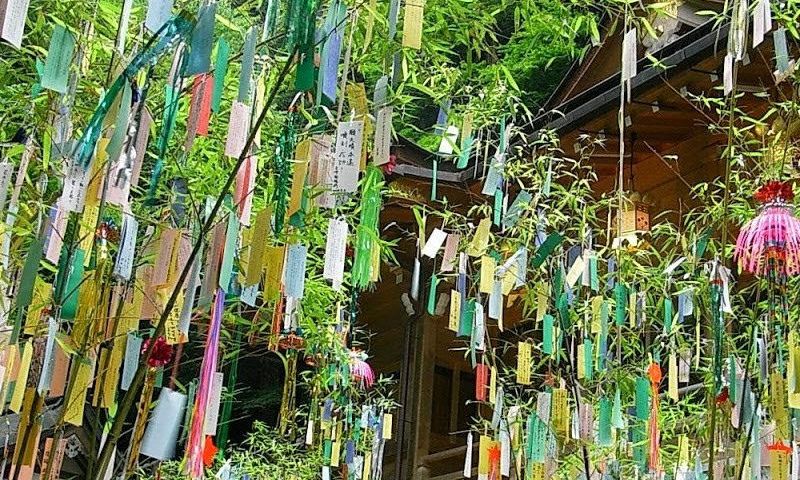 Tanabata, also known as the ‘Star Festival’, is a Japanese celebration which takes place on the seventh day of the seventh month. According to Japanese folklore, this is the only day of the year when the two stars, Altair and Vega, can meet.

At this time of the year, it is tradition to write Tanabata wishes (known as tanzaku) on colorful strips of paper and hang them on Tanabata trees made from bamboo branches. People also decorate their houses and public spaces.

Tanabata is one of Japan’s five traditional festivals known as ‘gosekku’ and it is an interesting time to visit the country. However, the Tanabata dates vary between different regions.

According to the formerly used lunar calendar, the seventh month is August rather than July. In some places like Sendai, they celebrate on August 7, though the official date is July 7.

What is the Tanabata festival

Huge Tanabata festivals are held throughout Japan. The most famous is the Sendai Tanabata Festival. Traveling to Sendai is easy using your Japan Rail Pass, it takes around two and a half hours from the capital. The Tokyo Tanabata Festival is also a grand affair.

The style of the festivals varies from place to place though most involve Tanabata decoration competitions as well as parades and a range of festive activities. The atmosphere is fantastic and the streets are lined with food stalls.

The Tanabata wishes are made on the first day of the festival. The following day, the decorated Tanabata trees are floated along a river, in the ocean, or burned as an offering.

The tradition dates back to the early 17th century though its popularity dipped after the Meiji Restoration (1868) and almost disappeared during the economic depression following World War I. However, after World War II the festivals once again became an important date on the Japanese calendar.

The tradition of Tanabata is based around the romantic story of the star-crossed lovers, Vega and Altair. They can only meet each other once a year and only if the skies are clear.

The story actually originates from the Chinese legend Qixi which was brought to Japan in the 8th century. The story is of two lovers: Princess Orihime, a beautiful seamstress, and Hikoboshi, a cow herder. They lived on different sides of the heavenly river (represented by the Milky Way).

Orihime’s father (God of the heavens) became angry as both of them abandoned their duties because of their devotion to each other and he forbade them from seeing each other. However, Orihime pleaded with him and as a concession he allowed them to meet once a year.

Japanese food has a world-class reputation and the food during Tanabata will not leave you disappointed. Some of the most important foods include: