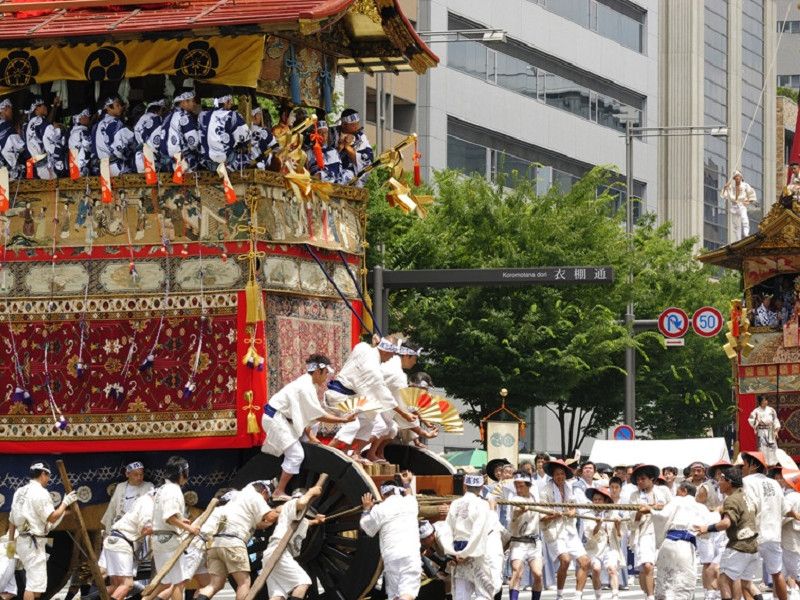 The Gion Matsuri is the largest annual festival in Kyoto, and the most famous in Japan. Locals and travelers alike fill the streets for this event that is part religious observance and part street fair.

The Gion Matsuri is the festival of the Yasaka Shrine, which was founded over 1,350 years ago. The festival itself also dates back over one thousand years. The original purpose of the Gion Matsuri was to pray for deliverance from a plague of sickness in 869.

Prayers were ordered by the emperor. Worshipers believed that the epidemic could be halted if the gods were appeased by a purification ritual. Decorated weapons and portable shrines were erected wherever a disease outbreak occurred. The event became an annual observance in 970.

These religious elements remain in both the floats and the selection of a local boy as a “sacred child” or “divine messenger.” The boy is not permitted to set foot on the ground from July 13 until he is paraded around the town on July 17. 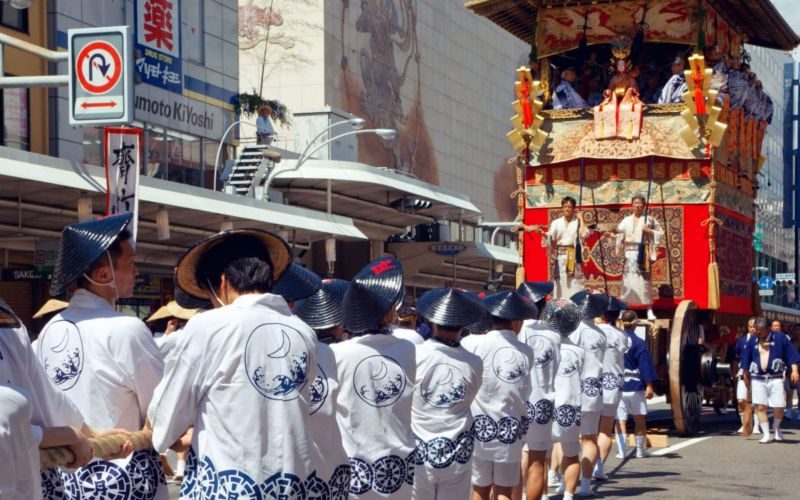 Locations and how to get there

The Gion Matsuri and related events don’t actually take place in the Gion district, but across the river from it, along the streets Shijo-dori, Karasuma-dori, Shijo-dori, Kawaramachi-dori, and Oike-dori. These and surrounding streets will be closed to vehicle traffic.

There are a number of ways to get in on the action:

From Kyoto Station, you can take the Karasuma Subway Line to Shijo Station and walk less than 5 minutes to Karasuma-Shijo intersection, the entire trip is less than 10 minutes. Keep in mind JR Pass does not cover the Kyoto subway.

Alternatively, you can walk from Kyoto Station to the Shijo-Karasuma intersection going north along Karasuma-dori street. The walk is about 30 minutes.

From Osaka, you can take the Tokaido Shinkansen line in Shin-Osaka station to Kyoto Station, and then follow the said above. The trip from Osaka to Kyoto is about 15 minutes in Shinkansen.

Today, the festival celebrates the culture of Kyoto. Celebrants don colorful and traditional yukata robes. Throughout the festival season, they view floats and eat street foods.

The mid-month Saki Matsuri Junko procession is one of the main events. Twenty-three of the yamaboko are staged at the Shijo-Karasama intersection. They travel east along the Shijo-dori, north along the Kawaramachi-dori, and west along the Oike-dori.

On the same day, the deity of the Yasaka Shrine is carried through town in a mikoshi, or portable shrine. Men carry the mikoshi on their shoulders. It returns to the shrine after the second procession.

Near the month’s end is the Ato Matsuri Junko, or “after the festival procession.” Ten of the yamaboko are again pulled through the city in reverse of the main parade route. Interestingly, this procession was reinstituted in 2014 after an absence of nearly 50 years.

Festivities of the Gion Matsuri take place during the entire month of July.

Dates remain the same from year to year.

If you’re planning to stay in Kyoto for the event, be sure to make your reservations months in advance. Accommodations are often completely booked and sell out quickly.

An essential element of the Gion Matsuri is the yamaboko, a collection of more than thirty parade floats.

There are two types of floats. Nine to ten are enormous hoko floats that can weigh 12 tons and measure 25 meters in height. The wheels of these floats are as tall as a man, built of wood without the use of nails, and decorated with fabric elements. Teams of several dozen men pull each float. Twenty-three slightly smaller yama floats also share in the fun.

Each of the floats is built and maintained by a different neighborhood guild. The floats are pulled through the town on procession days. When not in motion, the floats can be viewed on nearby streets, such as the Shijo-dori or the Shijo-Karasuma intersection.

Street parties called yoi-yoi-yoi-yama, yoi-yoi-yama, and yoi-yama are held on three evenings proceeding each procession day. Streets are closed and the floats are assembled. Families may put historic items – heirlooms such as kimonos, painted screens, and armor – on display to the public in a tradition called Byobu Matsuri. The parties last from dusk until 10 pm.