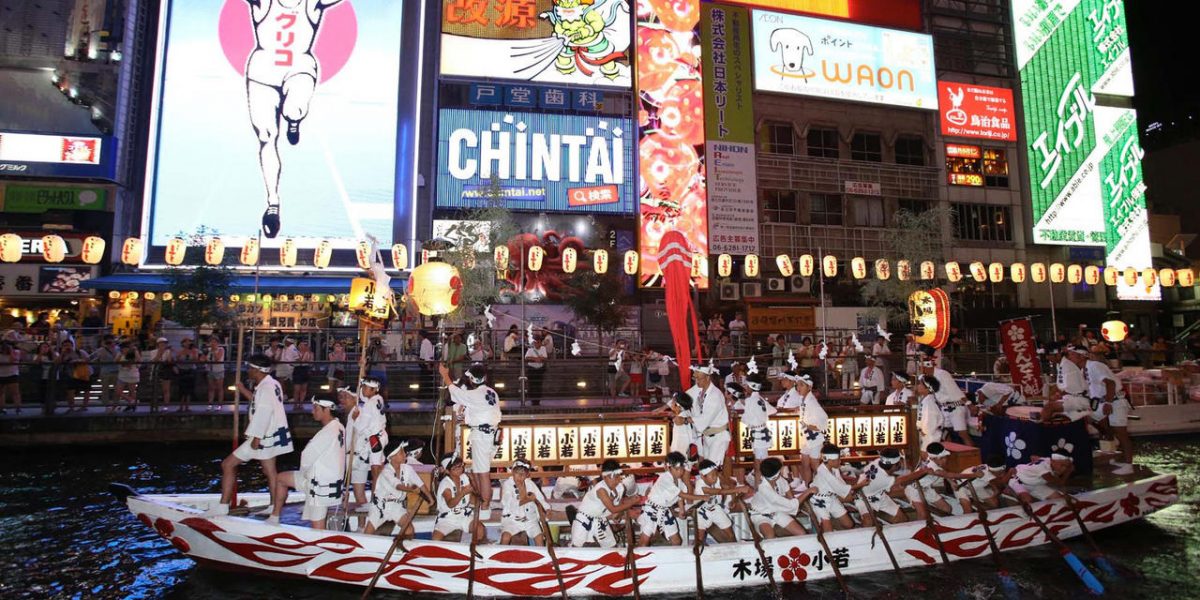 The Tenjin Matsuri Festival in Osaka is considered one of Japan’s top 3 festivals (along with Gion Matsuri, Kyoto and Kanda Matsuri, Tokyo). The festival honors the deity of scholarship, Sugawara Michizane, and includes a range of lively festivities over 2 days.

The festival starts on July 24 and lasts 2 days. It starts with a ceremony inviting the deity out of the shrine and ends with a spectacular display of fireworks over the Okawa River.

Tenjin Matsuri has been celebrated in Osaka for over 1,000 years. The first recorded festival took place in 951 when a spear was sent down the Dojima River as part of the Hokonagashi ceremony which still takes place today.

The festival evolved over the years and grew in popularity during the Edo Period when the city was Japan’s capital and its population grew dramatically. Tenmangu shrine was built near what is now the site of the Osaka Dome.

The festival continues to grow and change as more find new ways to celebrate the tradition. Today, the festival draws tens of thousands of people for the fireworks on the final night of the festival.

Different parts of the festival take place in different areas of Osaka by most of the festivities are centered around the Osaka Tenmangu Shrine and the Okawa River. You can easily reach the festival area by train.

If you have a JR Pass, you should take the Tozai Line to JR Osaka-Tenmangu Station. Connections from the Tozai Line and the Osaka Loop Line are available via Kyobashi and Kita-shinchi stations.

The festival kicks off on July 24 with a ritual at the Tenmangu Shrine where the deity of scholarship is drawn out. The golden Omikoshis on display in Tenmangu shrine is one of the highlights of the festival.

This is followed by a ceremony at the river when people pray for peace and prosperity for the city of Osaka. In the afternoon, men in big red hats beat drums to signify that all the preparations for the festival are complete.

The second day of the festival, on July 25, is when the fun really starts. The drummers lead the land procession from Tenmangu Shrine through the streets of Osaka. At 18:00 the procession reaches the Okawa River for the river procession.

About an hour into the procession, the main convoy (which holds the spirit of the Tenmangu Shrine’s deity) leaves the shrine and heads towards the Okawa River.

After the procession arrives at the Okawa River, the portable shrines are put onto boats and for the river procession. There are also stage boats where entertainers perform traditional noh and bunraku dances.

Agile Dondoko boats weave in and out of the river procession carrying mouth-watering food. The floating food stalls sell typical street food and drink and help to create a unique festival atmosphere. The river procession is one of the largest boat festivals in the world.

The night reaches its peak at 19:30 when the fireworks start. The spectacular display lasts 90 minutes and is recognized as one of Japan’s best displays of the year. The reflections on the water help to create a truly unforgettable spectacle.

Unsurprisingly, the banks of the Okawa River become very crowded for the fireworks display. People start arriving very early to start grabbing the best spots so it’s a smart idea to get there as early as possible.

Paid seats are available from a location near Temmabashi Station and they offer a  decent view of the fireworks. The floating procession disembarks at 21:00 after the fireworks and it marks the end of the event.