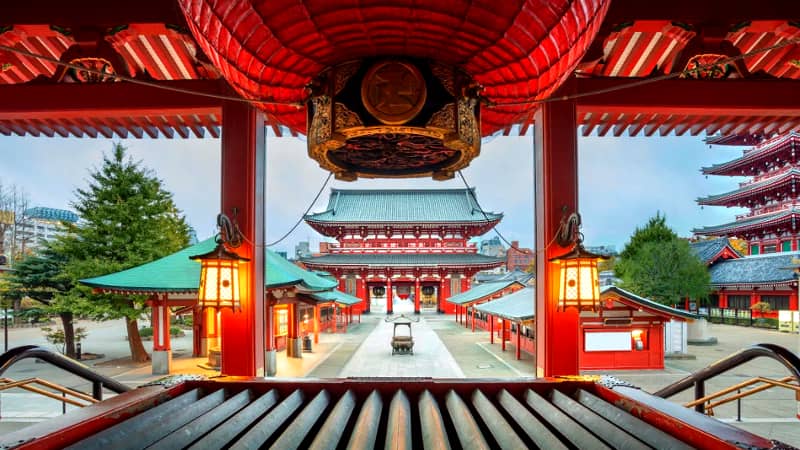 Sensoji temple, also known as Asakusa Kannon and located in Tokyo’s Asakusa district, is the city’s oldest religious building and one of its most colorful and popular.

With roughly 20 million annual visitors, it’s also the most visited-temple in Japan and the most-frequented spiritual site in the world.

Dedicated to Kannon Bosatsu (Avalokiteśvara), the merciful nirvana achiever and the Bodhisattva of compassion, Sensoji boasts an extensive complex including the main temple building and a 5-story pagoda, as well as an on-site shopping street, the Nakamise-dōri.

The history of Sensoji stretches back to the year 628, when legend states that two local brothers discovered a golden statue of Kannon in the Sumida River while fishing. Although they put the statue back into the water, it apparently magically kept returning to them.

Because of this seemingly divine occurrence, the chief of the then-small village of Asakusa decided to remodel his own home into a shrine that could house the statue and encourage locals to worship it. The earliest iteration of the Sensoji temple was completed in 645. 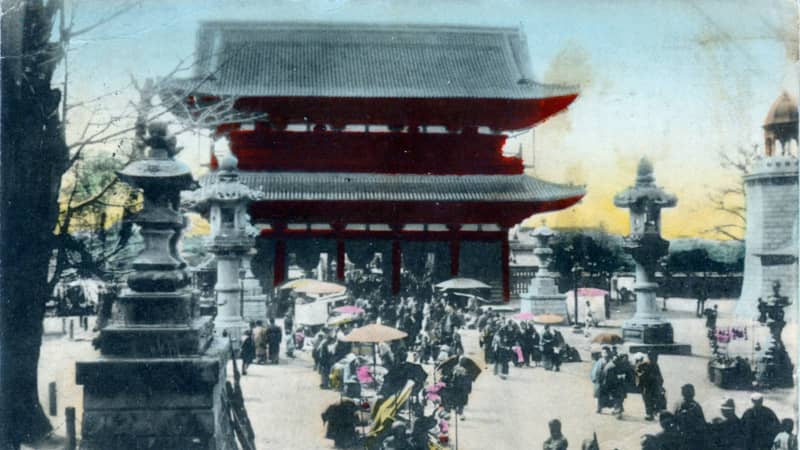 The temple achieved further symbolic status in the 1600s when Tokugawa shogun Ieyasu designated the site as a family temple to serve as spiritual protection against potential invaders from the northeast.

Later, during the 10th and 11th centuries, Sensoji received visits from influential samurai warlords from the Taira and Minamoto families ,who decided to rebuild and expand parts of the temple. It was during this period that the now famous Kaminarimon and Hozomon Gates were completed.

One key feature of the modern-day temple,the torii gate which indicates the entrance to the Nishinomiya Inari inner shrine, was erected in 1727.

Although much of the Sensoji complex was unfortunately destroyed during World War II air raids on Tokyo, the temple has since been fully reconstructed and is now considered a symbol of rebirth and peace in Japan.

How to get to Sensoji temple

Sensoji temple is easy to get to from a number of different points in Tokyo using the JR Pass.

It’s just a 15-minute train ride from Tokyo Station to Sensoji, by taking the JR Yamanote Line to Kanda station, and then the Ginza metro line to Asakua station.

From Shinjuku station, Sensoji is just a 20 minute ride on the JR Chuo Line and the Ginza Line. The temple is just a 5-minute walk away from Asakusa station.

Of course, the biggest attraction at Sensoji is arguably the temple complex itself, made up of the two main gates, a 5-story pagoda, the temple’s main hall, and a number of smaller sub-temples.

Other unique features include Nakimise, an extensive boulevard and ancient shopping street, and several intimate gardens, one of which contains Rokkakudo, Tokyo’s oldest wooden structure,

The outer gate of the Sensoji Temple, Kaminarimon is not only an iconic symbol of the town of Asakusa, it’s also one of the most popular meeting points and photo opportunities in all of Tokyo.

The gate is famous for its giant red chochin lantern, which weighs around 700 kg and hangs over all those who pass below. The front of the lantern displays the name Kaminarimon, which roughly translates as ‘thundergate’, while the back shows the gate’s official name, Fūraijinmon.

Beyond the gate lies the impressive Denpoin Temple, which is usually closed to the public. However, it occasionally opens for exhibitions showcasing Senoji’s extensive art exhibition – an excellent opportunity to experience Denpoin’s beautiful Japanese garden.

Hozomon is Sensoji’s main gate, which originally dates back to the 10th century, but has since been rebuilt multiple times like most other structures at the temple complex. 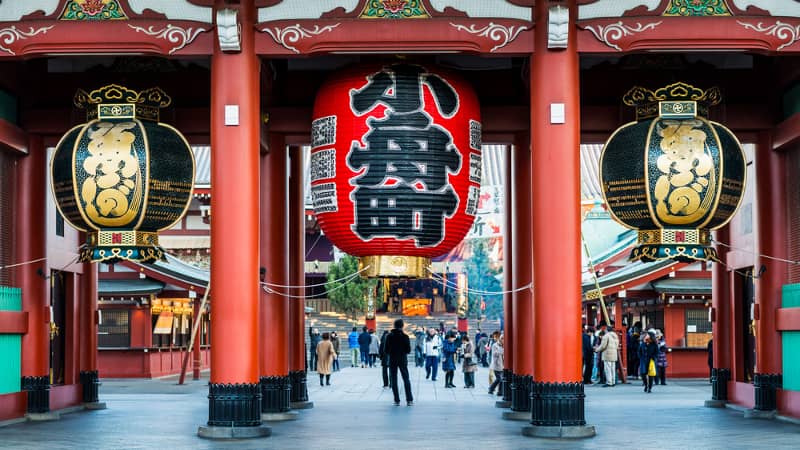 Like Kaminarimon, Hozomon is guarded by two protective statues, said to have been modelled on two famous sumo wrestlers from the 1960s, Kitanoumi and Myobudani Kiyoshi. At the back of the statue on the right-hand side, visitors can observe a pair of huge waraji straw sandals, erected to honor the sculptor and which weigh around 2.5 tons each.

Immediately inside the gate, you’ll usually find a large crowd gathered around the jokoro, an enormous incense burner said to heal the wounds of those who bathe in its smoke.

Directly behind the jokoro is Sensojis’ main hall, which is said to still contain the Kannon statue discovered by the fishermen centuries ago. However, it is also said that because the statue was so radiant, it had to be buried under the temple floor, and so cannot actually be viewed.

Next to it is Sensoji’s 5-story pagoda, which is closed to most visitors because it is considered a sacred memorial site and is only accessible at certain times of the year to those who have family members inscribed on the tablets within.

To the left of the main hall, visitors can explore the Asakusa Shrine, where the 3 men who originally founded the temple are honored. As the Tokyo Skytree towers over the structure from across the river, this historical building provides an ideal photo opportunity to contrast the traditional side of Japan’s capital city with its more modern one.

One of the biggest souvenir markets in the city of Tokyo, Nakamise is a 200 metre-long shopping street located within the temple grounds whose history as a commercial center stretches back centuries to the Edo period. 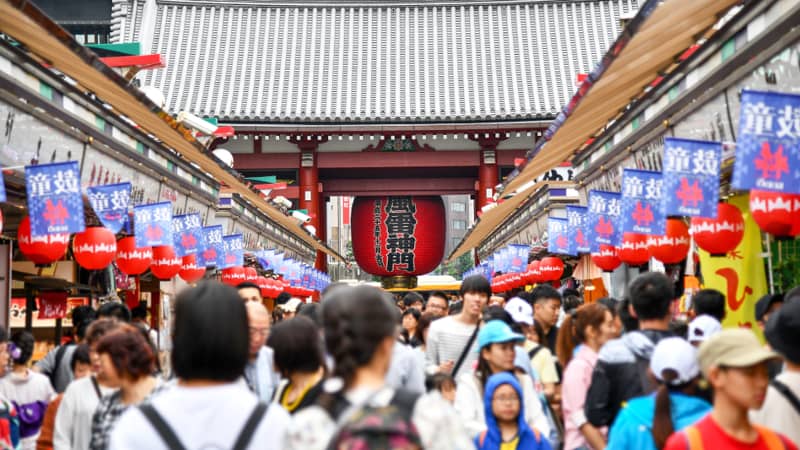 Stretching between the Kaminarimon and Hozomon gates, Nakamise contains around 90 different shops selling traditional Japanese souvenirs, including Kimonos, fans, and ukiyo-e woodblock prints, as well as a range of snacks from the local Asakusa area.

Sensoji is well-known throughout Japan for the numerous celebrations at the temple complex. Chief among these is the Sanja Matsuri festival which takes place over 3 to 4 days in late May.

Sanja Matsuri is Tokyo’s biggest annual festival and the Sensoji temple is at the centre of the event, with the surrounding streets closed off to traffic during much of the day to allow for large crowds to gather. 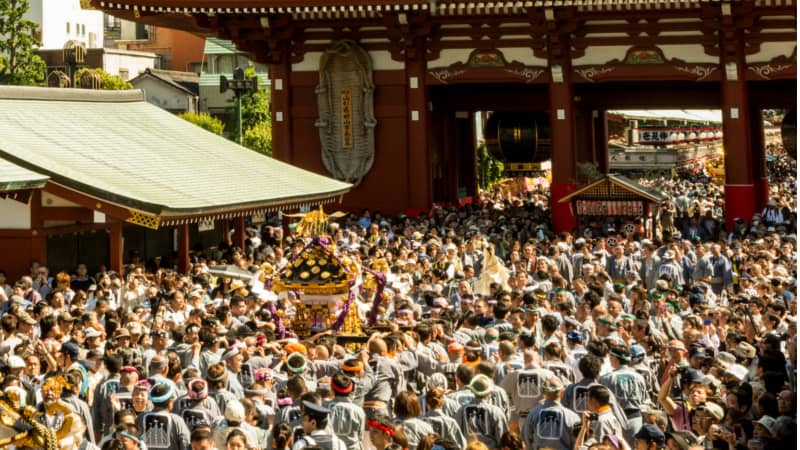 Other popular events which take place at the temple include the Hagoita-ichi (decorative wooden paddle) market in December, and the Asakusa Samba Carnival in August.

Sinsoji’s main hall is open from 6 am to 5 pm every day from April to September and from 6:30 am to 5pm from October to March.

Admission is free to the Sensoji temple. The temple grounds are always open, and the main building is illuminated nightly from sunset until 11 pm.