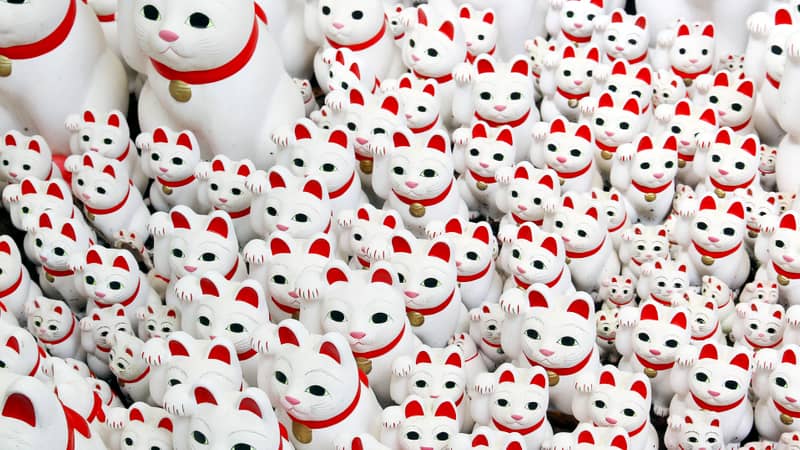 Gotokuji temple (護国寺 in kanji) is well known across Japan as the supposed origin of Maneki-neko, the “beckoning cat” figurine which is said to bring good fortune and success to its owner if kept in their bedroom or place of study.

Many people across the world mistakenly believe that this good luck talisman is Chinese in origin due to its popularity among Chinese and Vietnamese communities. However, the birthplace of Maneki-neko is undoubtedly in Japan, and one of the most popular legends links it directly to Gotojuki.

For this reason, you’ll encounter thousands of beckoning cats during a visit to Gotojuki, more than at any other temple in Japan. The figurines are made using a variety of materials, including wood, stone, metal, and porcelain, and come in a variety of colors, although the traditional white variation remains the most popular.

The history of Gotokuji temple

Although not as old as Tokyo’s Sensoji Temple, the history of Gotokuji temple dates back to 1680-81, when it was erected by the fifth shōgun, Tokugawa Tsunayoshi, in honor of his mother.

While many of Tokyo’s temples, including Sensoji, were largely destroyed during World War II and had to be later rebuilt, Gotokuji’s impressive 3-story wooden pagoda survived the American air raids intact.

There is also a historic cemetery on the temple grounds where many famous Japanese figures are buried, including the karate master Ōyama Masutatsu and several previous Prime Ministers, as well as a vast maple grove perfect for fall foliage viewing in Japan.

However, it’s in the small temple in front of the main pagoda, just past the antique bell tower and imposing incense burner in the shape of a large lion, that you’ll find shelves stacked full of thousands of Gotojuki’s most famous attraction, the Maneki-neko figurines.

Where is Gotokuji Temple and how to get there

Gotokuji Temple is located in the Bunkyō special ward of Tokyo, not too close to the main city attractions.

The easiest way to get there is using the Odakyu line (not covered by JR Pass) to Gotokuji station, which is only a 10-minute walk from the temple.

You can take the Odakyu line from Shinjuku Station, easily accessible with your JR Pass in the Yamanote line, from there is a 15-minute train ride to Gotokuji Station.

Alternatively, you can take the Tokyu Setagaya Line to Miyanosaka Station, which is only a 5-minute walk from Gotokuji.

The story behind Gotokuji’s waving cat

Many westerns mistakenly believe that Maneki-neko are waving, and some even think that the cat is washing its face, reflecting the Japanese belief that this action signals the arrival of a guest. However, its waving paw is actually meant to be beckoning people towards the figurine.

The most popular legend about the origin of the figurine takes place at the site of the Gotokuji temple in the 17th century when a poor monk is said to have lived on the site with his pet cat.

A samurai lord is said to have been traveling in the region during a large storm when he took shelter under a large tree near the temple, only to witness the cat waving to him with one paw from inside.

Curious, he got closer to investigate the strange cat, when the tree behind him was suddenly completely destroyed by a bolt of lightning. Grateful to the cat for seemingly saving his life, the lord became a patron of the temple and rebuilt the crumbling structure in honor of the lucky feline.

Nowadays, visitors to the temple offer representations of this cat to a god or Buddha in an act of hono or ‘offering’, as this is believed to make wishes come true and bring good fortune to those who leave a Maneki Neko behind.

If you visit Gotokuji and wish to leave a Maneki-neko behind but didn’t bring one along, you don’t need to miss out: there is a small souvenir shop on the temple grounds selling a whole range of the figurines.

You can expect to pay around 300 yen for the smallest cat figurine in the store, while the largest, a life-size statue, will set you back around 5000 yen. However, you don’t need to splash out too much to buy a Maneki-neko, as the size of the figure does not influence the amount of luck it brings you! 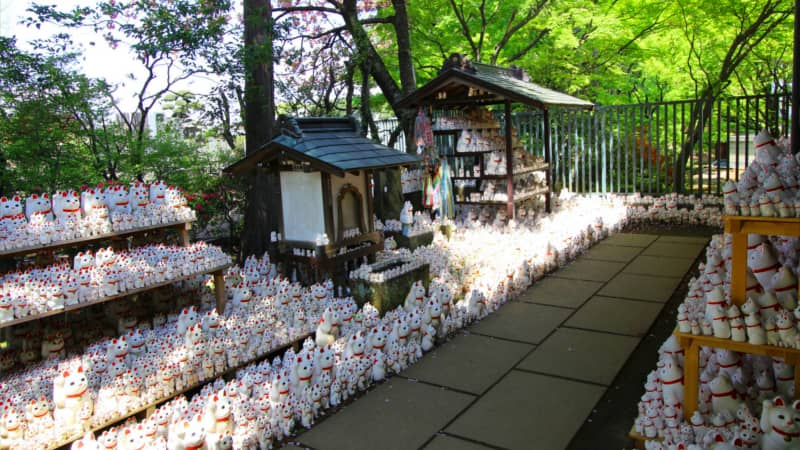 The store also offers a number of other good-luck charms that can bring specific blessings, such as warding off evil, encouraging romance, or the accumulation of wealth.

Ema zodiac boards with pictures of the Maneki-Neko are also on sale, and many visitors choose to purchase one to hang in the shrine instead of buying a figurine.

If you’re in the mood to commemorate your visit to Gotokuji with something sweet, there is also a traditional sweet shop just outside the temple grounds which sells delicious dorayaki pancakes adorned with the image of the beckoning cat.

Gotokuji Temple’s opening hours are from 6 am to 6 pm, Sunday to Saturday. There is no need to pay an entrance fee to access Gotokuji, as the temple is free of charge.

As the majority of hono offerings take place at Japanese New Year, the best time to visit the temple to see as many Maneki-neko as possible is during either January or February.