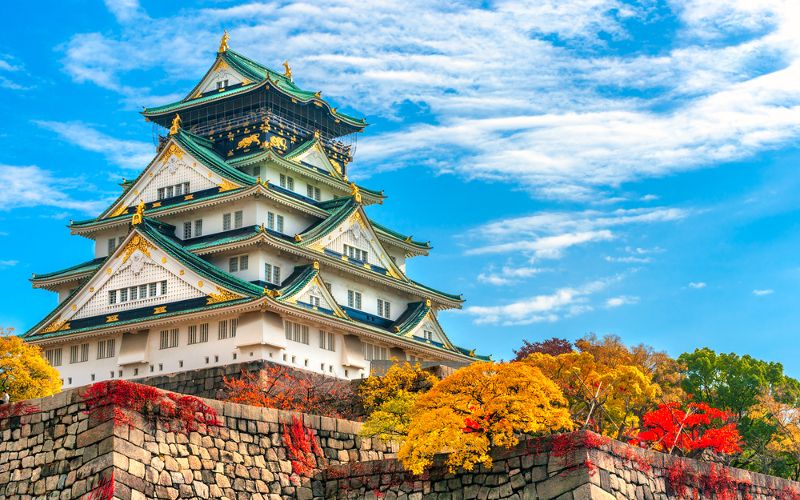 How to get to Osaka Castle

Osaka Castle is easily accessible from the JR Osakajokoen Station. Use your Japan Rail Pass to access the station.

For example, you can travel from Namba to Osakajokoen Station on the JR West Osaka Loop Line. Exit the station to the west and cross into the Osaka Castle Park. From there, you can meander lovely trails to reach the castle proper.

Osaka Castle stands on the former site of the Ishiyama Hoganji Temple. In 1583, during the Sengoku period, warrior and feudal lord Toyotomi Hideyoshi desired to build a castle that both mirrored and exceeded that of fellow lord Oda Nobunaga. It would serve as the ruling epicenter of a recently unified Japan. The castle, the largest of its time, was completed in 1597, and Toyotomi died the following year.

In the year 1600, a 200,000-man army came up against the castle. Though outnumbered two to one, the Toyotomi forces routed the army thanks to the castle’s unique defenses. By 1620, however, the Tokugawa clan overtook the castle and its buildings burned. The castle and its walls were then rebuilt. Over the years, conflict, accident, and natural disasters inflicted damage to the castle buildings. Much of it burned during civil conflicts in 1868, and the grounds became an arsenal that manufactured guns and ammunition for the Japanese army.

In 1931, the current castle structure was rebuilt. But, as the castle was a major military armory, it was bombed during World War II. Finally, in 1995, the government of Osaka embarked on a project to restore the castle to its former glory. Work was completed in 1997.

The castle grounds are approximately 15 acres, or two square kilometers, in size. Thirteen structures have been designated as “cultural assets.” These include:

The castle is surrounded by moats and steep rock walls. The main tower has five visible stories and eight total stories. The exterior of the building is a reproduction of the original. The interior functions as a museum on the history of Osaka castle and the surrounding city. At night, the castle grounds are illuminated by sodium lamps.

Osaka castle is especially popular during the cherry blossom season when the sakura trees are in full bloom. The grounds are also home to the Osakajo Hall multi-purpose arena, sports facilities including a baseball diamond, and a shrine to Toyotomi Hideyoshi.

The Nishinomaru Garden resides in the castle’s former western citadel. The lawn garden features around 600 cherry trees and a tea house. The garden offers stunning views of the castle. In the spring of each year, many families have hanami beneath the cherry trees. Many also visit for koyo viewing in autumn.

The castle tower is open daily from 9 am to 5 pm. Hours may be extended during special events or on holidays. The tower is closed between December 28 and January 1 each year. Admission is 600 yen for adults, and free to youths aged 15 and under. Group discounts are available.

Things to do near Osaka Castle

The city of Osaka affords no shortage of things to do. After spending a half day at the castle, you might consider a trip to Dotonbori, near Namba station. This popular entertainment, dining, and shopping district is lit by hundreds of glowing signs, including the famous Kani Doraku crab and the historic Glico Running Man sign.