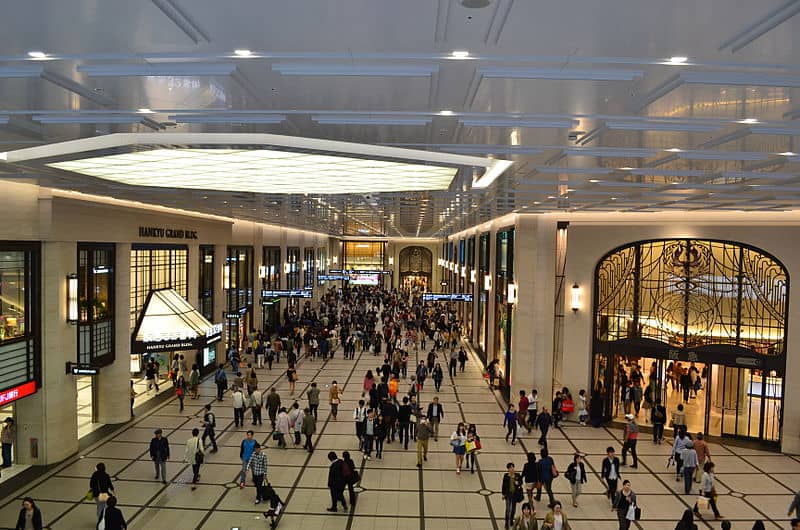 Umeda is the name of the area surrounding both Umeda Station and Osaka Station. Umeda is considered the transportation hub for sightseeing in the Kansai Region, which includes popular destinations such as Osaka, Kyoto, and Kobe.

As it is not itself a JR Station, you will not be able to use your JR Pass at Umeda Station. Umeda’s primary lines include the Midosuji, Yotsubashi, Tanimachi, Hankya, and Hanshin Electric Railway Lines.

If you wish to use your Japan Rail Pass, you can do so at nearby JR Osaka Station. This station is a short walk away.

Alternatively, this station can be reached on a six-minute ride on the Midosuji Line from Umeda Station.

You will find information boards throughout the station. You may consult these to help you find your way. In addition to text in English and Japanese, most of the stations are also color-coded. Hankyu Station is coded reddish-brown, Midosuji is red, Yotsubashi is blue, and Tanimachi is purple. Hanshin is not color-coded.

The Station also hosts a number of amenities, such as shopping and dining arcades full of restaurants, food stands, branded shops, and souvenir shops. Coin lockers are available on most levels for storing your luggage.

If you need assistance, you can access one of many travel information centers. The easiest information center to locate can be found near the Central Gate. There, you can make reservations or exchange your JR Pass. Printed maps of the station, both above and below ground, are also available.

How to Get to Umeda Station

When traveling between the JR Osaka and Umeda Stations, your path will depend on which Umeda Station line you plan to use. Why? Technically, there are not one but five Umeda Stations. How can this be? The reason is that each of the different railway companies:

When traveling from JR Osaka Station to Umeda Station, you may take one of the following routes:

Passengers arriving on the JR Tozai Line will arrive at another adjacent station, Kitashinchi Station. Tozai Line passengers may transfer for free between this line and the popular Osaka Loop Line, also known as Osaka kanjo-sen, or JR Kobe Line. Kitashinchi Station is a short walk from either the Osaka or Umeda Stations.

Using Umeda Station to reach your destination doesn’t have to be confusing. Consider the following popular routes.

How to Get from Umeda Station to Osaka Station

JR Osaka Station is about a one minute walk from Umeda Station. You may exit at street level, or you may pass through the underground shopping mall.

How to Get from Umeda Station to Namba Station

From Umeda Station, take the local Nakamozu train on the Midosuji Line. The trip will take about eight minutes to Namba station.

Things to Do Near Umeda Station

Umeda is home to a plethora of shopping malls and department stores. Umeda’s shopping area is the largest in Japan, even outsizing the Shinjuku shopping district of Tokyo. One underground shopping mall, known as chikagai in Japanese, connects the Osaka and Umeda Stations. Umeda Station is full of shopping spots as well, including the Hankyu and Hanshin Department Stores.

A popular sightseeing location in the surrounding area is the Umeda Sky Building. It hosts the unique architecture of the Floating Garden Observatory.

You can also take the train to other nearby points of interest. For example, you can access Namba Station, which is located near the famous Dotonbori street.