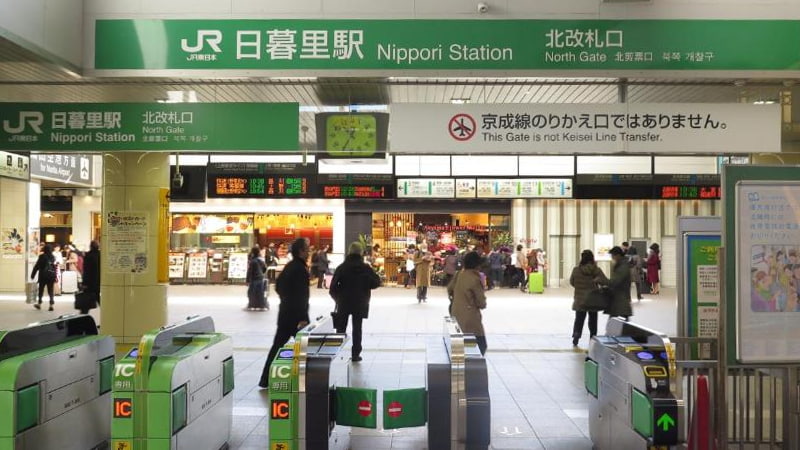 Nippori Station, called Nippori-eki in Japanese, is located in Arakawa, a Tokyo’s special ward. The station, like Tokyo itself, enjoys a long and abundant history. “Nippori” means “place where the sun sets”, and this quiet area hearkens back to the charms of yesteryear.

Nippori Station was inaugurated in 1905. Today, it serves over one hundred thousand passengers each day. Will your travels take you through Nippori Station? Employ this handy travel guide to learn about the station’s train lines and nearby attractions.

How to get to Nippori Station

The East Japan Railway Company, or JR East, operates a number of lines through Nippori Station. These include:

The Japan Rail Pass can typically be used on any of the JR lines.

There are also several non-JR lines operating from Nippori Station, at it serves as an intersection of several rail systems. These include:

An elevated platform services outbound Keisei trains, including the limited express trains Skyliner, Cityliner, and Eveningliner. The Skyliner provides rapid access to Narita Airport. The JR Pass is not inclusive of these rail lines.

Yanaka has been described as a “district with a pleasant atmosphere of old Tokyo”. The Yanaka Ginza is a shopping street that represents the flavor of the district. It is located a short walk from Nippori Station. Part of a residential district, the Yanaka Ginza offers a glimpse of daily life in Tokyo. There, you will find shops and stalls selling clothing, produce, toys, and other goods. The foodie will delight in inexpensive snack food stalls. One well-known shop specializes in “10 yen buns” with flavored fillings, including black sugar and green tea.

Nearby, you will find the Yanesen Tourist Information Center. There, you can learn more about the area, or take a class in ink painting, kabuki dressing, instrument playing, flower art, calligraphy, or other traditional Japanese arts. Reservations are required for class attendance.

Perhaps surprisingly, the Yanaka Cemetery is another popular attraction. The cemetery’s central street is lined with cherry trees, attracting sakura viewers in spring. The tomb of the last shogun, Tokugawa Yoshinobu, is located there, as well as those of over a dozen other shoguns. Many of the more than 7,000 tombs are elaborate and landscaped. The wide paths offer a nice venue for a stroll.

The cemetery was once a part of the grounds of the Tennoji Temple, and they are still connected by the central Sando road. The temple is guarded by a large, bronze Buddha statue seated outside its main building.

To the east of Nippori Station is the Nippori Textile Town. This mile-long street houses over 100 stores highlighting sewing, knitting, quilting, and similar crafts.

Where will your travels take you? With your JR Pass in hand, you’re equipped to tour Japan like never before.