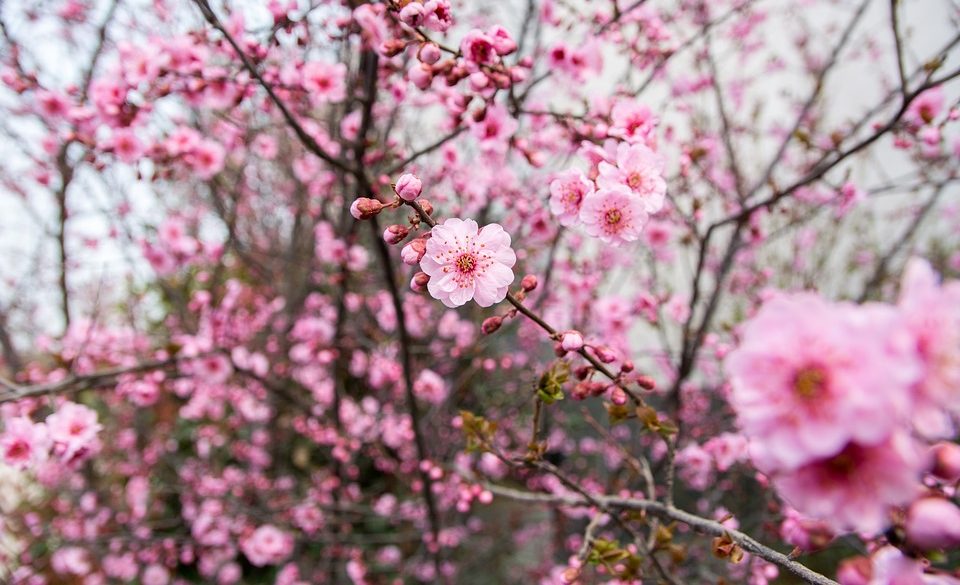 People throughout the world are familiar with the famous Japanese cherry blossoms. They may have attended any of the numerous cherry blossom festivals held each year in the United States and elsewhere, or they may have thrilled to the sound of “Sakura Sakura”, a traditional Japanese folk song celebrating this beautiful flower.

Before the cherry blossoms emerge, however, another beautiful tree graces the island of Japan. Mid-February marks the start of spring and the beginning of the plum blossom season. If you want to see the plum blossoms in Japan, keep on reading!

The ume, word for the Japanese plum tree, begins blooming in mid-February, whereas the peak season for viewing the sakura, or cherry blossom occurs in April.

The plum tree also offers a special treat – not only are the flowers beautiful and especially fragrant, but they are surrounded by intriguing red or purple leaves on many tree varieties.

Another interesting fact is that the ume fruit is actually sourer than the Western plum or apricot, and is often processed in various forms before eaten. The most popular one is umeboshi, a sour, pickled plum, which is normally eaten along with cooked rice.

Vacationing during this plum blossom month allows you to avoid the crowds that gather at many cherry blossom spots in Japan. Be sure to dress warmly as the weather is still chilly, although you can always visit some of the best ski resorts in the world!

Meaning of the Japanese plum blossom

Japanese plum blossom symbolizes vitality, hope, and renewal, and the flower of the humble plum tree enjoys similar symbolism in many Asian cultures. It is born of the bitter cold of winter and reminds its observers that spring will soon arrive.

Just as the blossom must endure much hardship in order to become a thing of beauty, so we as people develop inner strength and admirable qualities with the passage of time.

Where to see the plum blossoms in Japan? There are many breathtaking photo-worthy locations you will be able to access with the Japan Rail Pass, while traveling easily. Here is our selection:

Considered one of the three most beautiful parks in Japan year-round, Kairakuen, in the city of Mito is truly stunning when its 3,000 plum trees are in full bloom.

It hosts one of Japan’s largest plum festivals from mid-February through late March. If you have a Japan Rail Pass, you can reach this garden by taking the Japan Rail JR Joban Line to Mito Station. The park is a mere fifteen-minute bus ride from the station. A special train is also available from Mito Station to Kairakuen Station during the plum blossom season.

An interesting fact about the trains: the E657 series trains, currently operating on the Joban line, was designed to reflect the red and white ume blossoms found at Kairaku-en.

Nestled in the Setagaya-Ku capital district in southwest Tokyo, Hanegi Park is home to more than six hundred plum trees. A plum blossom festival is held here each year from mid-February through early March.

This park is also accessible using the Japan train system. From JR Shinjuku Station, take the Odakyu Line to Umegaoka Station – an aptly named location, as umegaoka means “plum hill”. You can also get here from Shibuya Station with the Keio-Inokashira Line.

Kitano Tenmangu is the most renowned plum viewing spot in the north side of Kyoto, Japan’s ancient capital. This is also a large Shinto shrine located near the Golden Pavillion and the Kamishichiken geisha district.

To reach this location by train, travel to the JR Kyoto Station and catch bus 101 to Kitano Tenmangu.

Established during the early Edo period, Koishikawa Korakuen is one of Tokyo’s oldest gardens. The walls of this garden allow you to leave behind the bustle of the city and revisit a more peaceful time.

While its claim to fame may be a large weeping cherry tree near the garden entrance, it is also home to a number of plum trees. Koishikawa Korakuen is a mere eight-minute walk from Iidabashi Station, on the JR Chuo Line.

Many people visit Tokyo to enjoy its vibrant city life. Kyu Shiba Rikyu combines a traditional oriental garden with the urban landscape to give you the best of both worlds.

Early in the plum season, rare winter cherry trees, called jugatsuzakura, are also in bloom here. This garden is a three-minute walk from Daimon Station, on the JR Keihin-Tohoku line.

Imagine 35,000 white flowering plum trees set against the unforgettable and majestic backdrop of Mount Fuji. A plum blossom festival is Odawara city here during the month of February. Special events include calligraphy demonstrations and live performances of archery on horseback.

The main locations are Joshi Koen (park surrounding Odawara Castle) which is 10 minutes by foot from JR Odawara Station, and Soga Bessho Bairin, which is a fifteen-minute walk from the JR Shimo-Soga Station.

Now you know: planning your trip to see the cherry blossoms in Japan is an excellent idea, but the plum blossoms may be interesting too!

1 thought on “Plum blossoms in Japan: Best places and forecast”