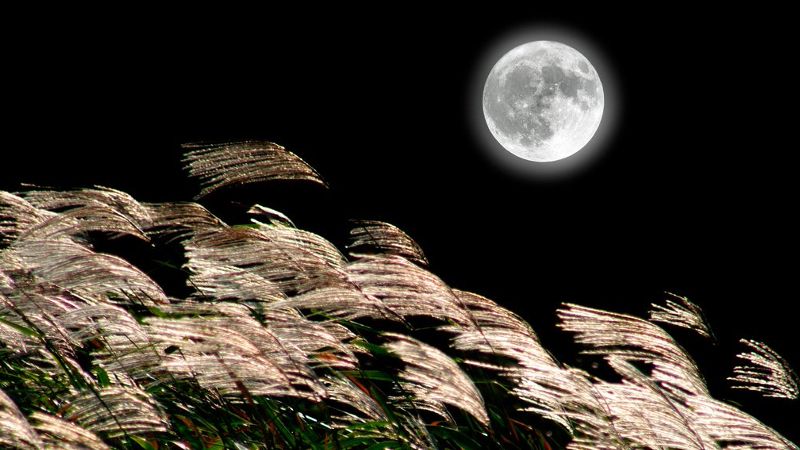 Tsukimi, also called Otsukimi or Jugoya, literally means “moon viewing” or “looking at the moon”. Like the hanami of spring and koyo of autumn, this Japanese festival honors a wonder of nature – the autumn moon.

What are the origins of this festival, and how is it celebrated today? This travel guide will provide all the details you should know if traveling to Japan during the Harvest Moon Festival.

Since ancient times, Japanese writings have identified the month of September as the best time for viewing the moon, as it is especially bright. It was thought that the viewer could express gratitude for this year’s harvest and hope for the year to come.

The Tsukimi tradition dates back to the Heian period, from 794 to 1185 A.D. It is thought that moon-viewing parties originated with the introduction of the Chinese Mid-Autumn Festival to the aristocratic elite, who would gather to listen to music and recite or compose poetry by moonlight. Some would board boats in order to view the moon’s reflection.

By the 1600s, the custom had become popular with the civilian population as well, where it became associated with existing traditions in which some of the rice harvest was offered to the gods.

Until 1683, the full moon always fell on the thirteenth day of each month. In that year, the calendar was altered so that the full moon fell on the fifteenth. Moon viewing parties would then happen throughout the month – some on the thirteenth, others on the fifteenth, regional observances on the seventeenth, and Buddhist religious observances on the twenty-third or twenty-sixth. These celebrations ceased when the Meiji period began in 1868.

This festival is a rather solemn observance. It involves traditional foods, decorations, and the beauty of nature. Some observers also visit shrines, burn incense, or make food offerings to Shinto gods.

Today, some people repeat the customs for several days following the full moon rather than simply on the night of the full moon. When the moon is not visible at festival time, celebrations are still held. They are referred to as Mugetsu or Ugetsu, meaning “no moon” and “rain moon,” respectively.

Tsukimi dates are recorded on the traditional Japanese calendar, and must be translated to modern calendar dates. The full moon celebration takes place on the fifteenth day of the eighth month, and the waxing moon celebration on the thirteenth day of the ninth month. These dates typically fall in the months of September and October on our modern calendar.

Tsukimi customs involve eating a type of rice dumpling called Tsukimi dango, a sweet similar to mochi. The dumplings are round and white and are said to celebrate the beauty of the moon. Eating them on the night of the full moon is thought to bring good health and happiness in the coming year. Other traditional foods include mooncakes.

Even fast food restaurants sell special egg dishes during this time, such as egg sandwiches or Tsukimi soba or Tsukimi udon – boiled noodles topped with nori, broth, and a raw egg, which is thought to resemble the moon.

Additional foods – the produce of the season – are presented as offerings to the moon itself. Sweet potatoes are prepared as an offering to the full moon, chestnuts and beans to the waxing moon. Taro, edamame, and sake may also be consumed or offered. Because of this, the celebrations may be referred to as Imomeigetsu, Mememeigetsu, or Kurimeigetsu, the potato, bean, chestnut harvest moons, respectively.

Traditionally, prayers for an abundant harvest accompany this custom.

Susuki, or pampas grass, is a traditional decoration. These resemble rice plants, and five to 10 plumes represent a bountiful harvest. The area where the moon viewing will take place is typically decorated with this grass, and it is thought that this will protect the area from evil. Roofs may be decorated as an offering to the moon god. Autumn flowers in the ikebana style may also be used.

Food offerings also serve as decorations. For example, taro bulbs with multiple shoots represent a prosperous family. Dango may be stacked in displays of 15 to represent the fifteenth day of the month, or 12 to represent the months of the year. Tea ceremony displays may also be present.

What is the Rabbit on the Moon?

Instead of the “man in the moon” well-known in the West, in Japan the moon’s craters are said to be an image of a rabbit pounding mochi. This may relate to a Buddhist fable, in which the man in the moon took a kind rabbit back with him, or it may be a play on words. The term mochizuki, which means “full moon,” also sounds like the word for mochi pounding.

Annual events around Japan include:

You can use your JR Pass to travel to many of these events.