JRailPass.com » Japan Travel Blog » Travel Guides » Visiting Kumamoto Castle: How to get there and what to see 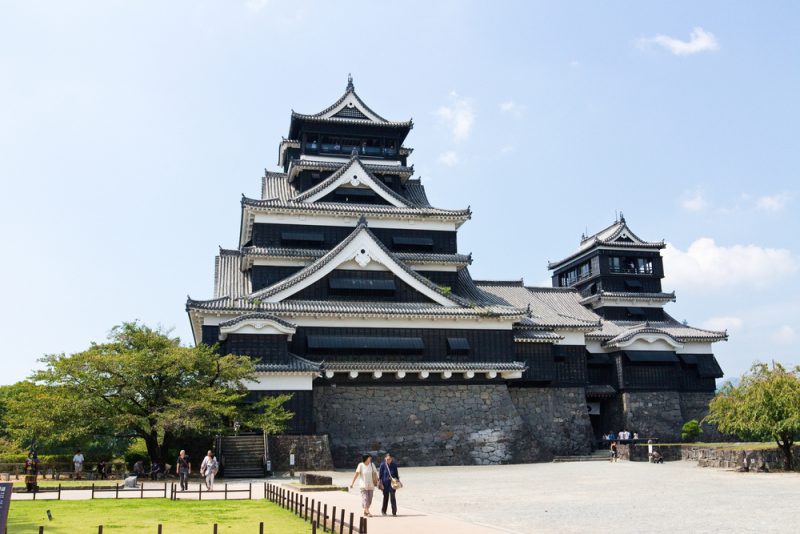 Located in Kumamoto Prefecture on the island of Kyushu, Kumamoto Castle (熊本城, Kumamoto-jō) is one of the largest and most impressive castles in Japan. During its heyday, it was considered one of the most impenetrable fortresses in the country.

Designed with strategic defense firmly in mind, the castle originally boasted over 49 turrets, 29 gates, and a number of unique defensive measures including holes in the walls for dropping boiling water, rocks, or excrement onto attackers.

Another unique feature of the original castle was the material used for its constructions: dark wood stained with pine soot and persimmon tannin to repel insects in the summer and withstand seasonal changes.

Nowadays, the castle is a cherished historic property in Japan, and over 13 of its remaining structures have been designated as Important Cultural Properties.

Kumamoto is considered one of the 3 premier castles in Japan alongside Himeji Castle and Matsumoto Castle, all of which can easily be visited on public transportation using the JR Pass.

Fortifications were first established at the site of the current castle in 1467, but it wasn’t until the early 1600s when the local feudal lord and strategist Kato Kiyomasa began design and construction of many of the structures as they appear today.

The castle took over 7 years to complete and the fortifications were considered to be some of the most extensive and structurally sound yet completed for a castle in Japan.

Kumamoto castle remained largely intact until the Seinan Civil War in the late 1800s, when it served as the main garrison for government troops on Kyushu and was subsequently attacked by famous samurai Saigo Takamori.

Although the government troops were able to withstand a 2-month siege and eventually repel the rebels, several key parts of the castle sustained damage during the attack.

Nevertheless, the Castle keep was eventually reconstructed in the 1960s, while many of the other original 17th-century structures were rebuilt from between 1998 to 2008.

Aside from being affected by the ravages of war, Kumamoto castle suffered extensive damage during the Kyushu earthquakes of April 2016.

The earthquakes caused a number of roof tiles to dislodge and fall, and several entire structures collapsed, including turrets and walls. Unfortunately, much of the extensive renovation work completed in the previous years was undone by the tremors.

New restoration efforts began soon after the disaster. Although the entire process is not expected to be completed until 2036, the main tower of the castle has already been restored to its previous condition and is expected to reopen in summer 2021.

To allow visitors to view the inner castle grounds during the restoration efforts, an elevated walkway was opened on June 1st, 2020.

How to get to Kumamoto Castle

The castle is located close to Kumamoto City centre and is just a 15-minute tram ride from JR Kumamoto Station. The Kumamotojo-mae tram stop is just a short walk from the castle gates.

Visitors can also take the Castle Loop Bus from the Kumamoto Kotsu Bus Center, or even enjoy a 40-minute scenic walk to the castle from Kumamoto Station.

The Kumamaoto castle complex is one of the largest in Japan, measuring approximately 1.6 kilometres from east to west, and 1.2 kilometers (0.75 mi) from north to south.

The extensive structures include the imposing castle keep, a number of turrets and moats, and even a mysterious underground passage.

The main wooden tower of Kumamoto castle unfortunately burnt down in 1877 during the civil war, but in 1960 was replaced with a concrete-based replica which is an impressive facsimile of the original structure.

Made up of 2 tall interconnected towers, the building now houses a museum where you can learn about the history of the castle and the various reconstructions over the years.

One of the most impressive interiors at the castle can be found at the Honmaru Goten Palace, which was also destroyed during the Seinan Civil War but reconstructed for the 400th anniversary of the castle in 2008.

The most lavishly decorated room is the Shokonnoma: most of the surfaces are decorated with gold leaf and the space also boasts a number of paintings by famous Japanese artist Kotonobu Kano.

Another unique feature of the Goten Palace is the “The Lord’s Extravagant Inner Palace Reception Hall”, a series of rooms with sliding doors which can be made into a large unified space.

Although the visiting public can’t actually enter the hall itself, it can be viewed from the Ohiroma-engawa, a corridor that runs alongside the space and also offers views over the castle’s inner courtyard.

Located at the front of the castle, the Uto-yagura (yagura meaning ‘tower’ or ‘turret’ in Japanese’) is one of the few buildings at the castle to have survived the siege of 1877 intact.

This means that the current structure actually dates back to the Edo period and the time of the initial construction of the castle, and accordingly has been designated as an important cultural property in Japan.

If you take a guided tour of the castle, it’s likely to begin and end in Ninomaru Park, the lush and extensive castle grounds.

The location of Kumamoto’s Prefectural Art Museum, the park is also an ideal location for Cherry blossom viewing in the spring.

In order to help the restoration effort of the castle following the 2016 earthquakes, supportive locals have held a number of fund-raising events at the castle, including a marathon held annually in February.

Kumamaoto castle is also well known for its annual Autumn Festival celebration, which features traditional activities such as a taiko drumming performance and is also an ideal opportunity for fall foliage viewing in the castle grounds.

Although it is not currently possible to enter any of the actual structures of Kumamoto Castle due to the ongoing restoration work, the elevated walkway is currently open to the public from 9am to 5pm every day.

The walkway is also open on Sundays, selected Saturdays, and most national holidays. The walkway entrance fee is 500 yen to enter per person.