JRailPass.com » Japan Travel Blog » Destinations » Fukuoka Travel Guide: How to get there and attractions 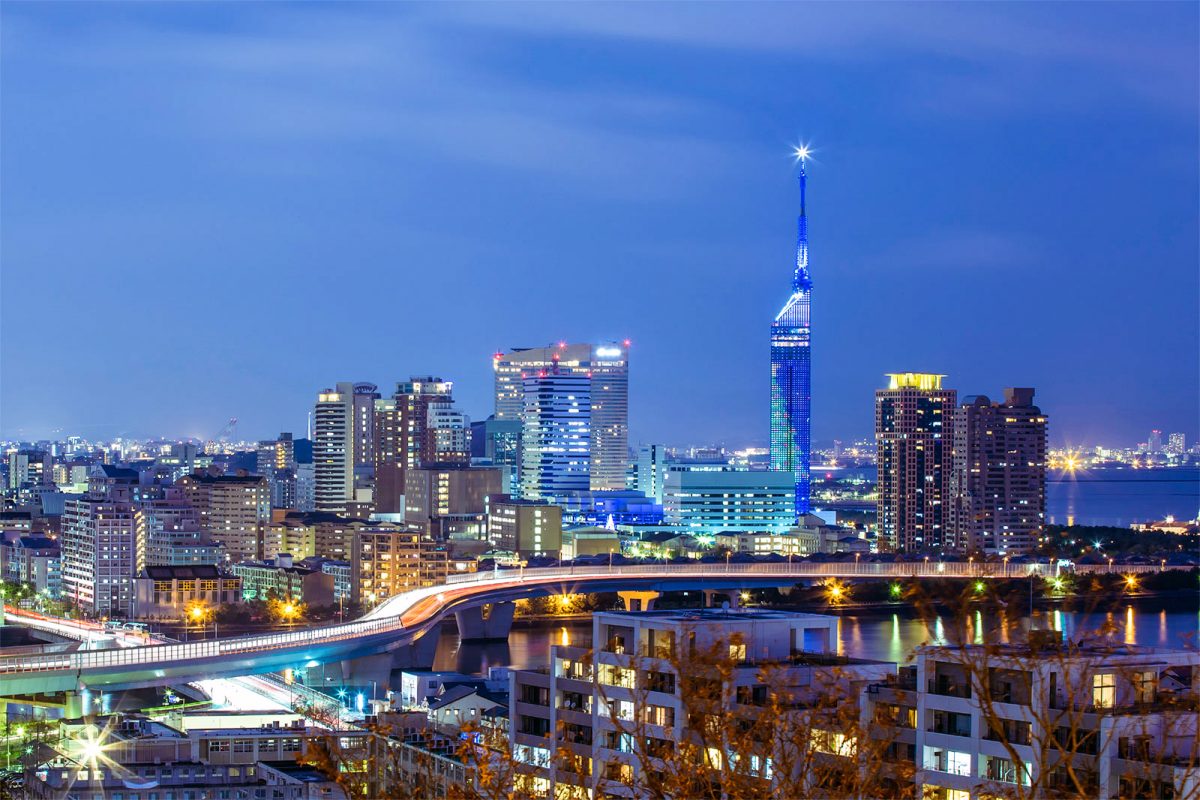 Whatever you’re looking for in your next Japanese vacation, Fukuoka is likely to deliver. The city is home to traditional parks and temples, massive shopping complexes, modern cityscapes, and special offerings for the food enthusiast. There are also a number of day trips from the city made possible using the Shinkansen bullet trains, and its southern, warmer weather is loved by the Japanese.

Consider this helpful Fukuoka travel guide when planning your next vacation. You’ll discover interesting things to do as well as helpful tips on getting to and around the city.

Tokyo to Fukuoka by train

You’ve got your Japan Rail Pass in hand and you’re ready to use it to travel affordably across Japan. Thanks to the Shinkansen bullet train lines that service Fukuoka’s Hakata Station, doing so is easy.

If traveling from Japan’s metropolitan hub of Tokyo to Fukuoka, take the Tokaido/Sanyo Shinkansen train from Tokyo to Shin-Osaka Station, where you will transfer trains before continuing to Hakata Station. In order to use your JR Pass, you will ride either the Sakura or Hikari trains.

You may wonder, how far is Fukuoka from Tokyo? Tokyo is located on the main island of Honshu, while Fukuoka is on the southwestern island of Kyushu. This trip of approximately 1,000km is one of the longest train trips you can make in Japan. The Shinkansen trains actually pass through an undersea tunnel between the islands, and the entire trip takes about six hours.

Osaka and Kyoto to Fukuoka

If you are traveling from Kyoto or Osaka to Fukuoka, you will likewise take the Sakura train on the Sanyo Shinkansen line, departing from Kyoto Station or Shin-Osaka Station and arriving at Hakata Station.

This trip entails about 2 hours and 30 minutes of travel time from Osaka and 2 hours 45 minutes from Kyoto, passing by Hiroshima Station, which is two hours from Fukuoka. This train is also covered by the JR Pass.

Once you arrive at the newly renovated Hakata Station, you will enjoy shopping, dining, and a thriving nightlife within the station itself.

Also, remember that you can activate your Japan Rail Pass and make any seat reservations and train changes in Hakata Station.

Traveling around Kyushu with the Kyushu Shinkansen

To continue your journey throughout Kyushu, you can travel quickly and comfortably using the Kyushu Shinkansen. This bullet train allows rapid travel to Kumamoto, Kagoshima, Beppu, and Nagasaki. Additional service areas will be opening for the line in 2023.

Also, JR Limited Express trains are available from Hakata Station, including the Kamome to Nagasaki, the Yufuin no Mori to Oita’s Yufuin Hot Springs, and the Ariake to Kumamoto. The Sonic Limited Express connects with Beppu and is also covered by the JR Pass.

Other train lines in Kyushu

If you are looking for a unique way to see the island of Kyushu, the luxurious Seven Stars Kyushu might be just the ticket. This train departs from Fukuoka on trips of four days and three nights or two days and one night.

Fukuoka train services are also provided by several non-JR lines, including Nishitetsu Railways and three different subway lines. Some of the subway lines – such as the Kuko subway line – connect with Hakata Station, but the Nishitetsu trains utilize Tenjin Station. The Kuko subway also delivers direct, ten minute transportation to the Fukuoka Airport.

Main train stations are also connected by the 100 Yen Bus, which, as its name suggests, offers loop rides through the city center and various attractions for only ¥100.

Things to do in Fukuoka

Fukuoka is famous for its open air food stands, called yatai. Over 150 food stands are spread across the city, each seating six to eight people for an outdoor dining experience. Some of the best yatai are located on Nakasu Island. Twenty or more yatai are grouped together, enjoying a scenic waterside view. Common offerings include skewered meats (yakitori), Hakata Ramen soup, and alcoholic beverages. The stands are typically open from 6 pm to 2 am each day.

In addition to the shopping available at Hakata Station, another popular destination is the “city within the city” known as Canal City Hakata. An open-air canal runs through the complex, with water shows every thirty minutes. Visitors will enjoy international brands, shops exclusive to Japan, a theater, hotels, gaming, and restaurants.

Finally, the history buff will delight to pay a visit to the Fukuoka castle ruins. Once the largest castle in Kyushu, it was torn down in the late 1800’s. Foundations of many structures whisper of its former glory. The park is laced with walking trails and is an excellent spot for viewing cherry blossoms in early spring. Next to it is Ohori Park, a registered Place of Scenic Beauty with a magnificent pond.

And if you are looking for a traditional temple, make sure to visit Kushida Shrine, just 15 minutes by foot from Hakata Station. Founded in 757, it is the home of the Hakata Gion Yamakasa Festival, which is held every year during the first half of July.

Dazaifu is one of Japan’s most important Tenmangu Shrines. There are hundreds of them across the country but Dazaifu and Kyoto’s Kitano Tenmangu Shrine are recognized as the two most magnificent.

Tenmangu Shrines are dedicated to Sugawara Michizane, a scholar and politician of the Heian Period who is associated with Tenjin (the Shinto deity of education). Michizane’s career was remarkable and his influence quickly grew until he was head of the Fujiwara clan.

His rapid rise to power was ultimately his downfall as he was exiled from Kyoto by his rivals. He died in 903 and shortly after his death the country was hit by a string of natural disasters.

People thought the spirit of Michizane was responsible for disasters so they began building shrines and making offerings to calm his wrathful spirit. Dazaifu is built on the site of his grave.

Nanzoin Temple is famous for its giant, bronze, reclining Buddha and its connection to the Sasaguri Pilgrimage and the millions of people who make the sacred journey each year. The site is located in the Sasaguri area of the Fukuoka Prefecture.

This giant Buddha (known as Nehanzo) is 41 meters in length, 11 meters in height, and weighs roughly 300 tons. It was built in 1995 to house the ashes of the Buddha and two of his followers, Ananda and Maudgalyayana.

Most Buddha statues in Japan show Buddha in the sitting rather than reclining pose. The reclining pose, which represents Buddha entering Nirvana, is much more typical in south-east Asia.

When visiting the statue, visitors are meant to hold the colored ropes which hang from the bronze statue’s left hand and say a prayer. It is then considered lucky to place a coin on the decorations.

The 234-meter tower is Japan’s tallest beach tower. Known as “Mirror Sail”, the tower is covered by around 8,000 half-mirrors which gives it a striking appearance.

Visitors can enjoy panoramic views of Fukuoka city from the observation room on the 5th floor and peer through the state-of-the-art telescopes. The view from that height is even more dramatic at nighttime when the city’s streets are lit up.

The tower is even more spectacular during festivals such as Tanabata. The tower is covered in decorations and illuminated with thousands of lights which creates an incredible effect in tandem with the countless mirrors.

The first floor is full of shops and restaurants which sell local specialities such a mentaiko (cod ovum). Visitors can also head to the nearby Momochi Seaside Park during the summer months which offers breathtaking coastal scenery.

Whatever activities you choose, you are certain to be pleased with your experience in Fukuoka. Don’t forget to check out our other insightful travel guides, spanning locations across the nation of Japan.

16 thoughts on “Fukuoka Travel Guide: How to get there and attractions”