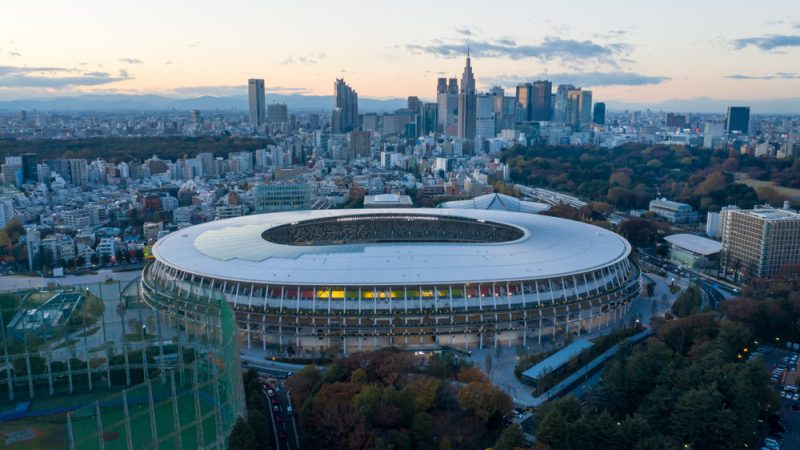 The New Natioanl Stadium or Tokyo Olympic Stadium was the main stage in the iconic ‘64 games and once again it was the center for the 2020 Olympic Games. Both the Opening and Closing Ceremonies and the athletics were held at the officially called New National Stadium (新国立競技場 Shin kokuritsu kyōgijō).

With the 2020 Olympic Games just months away, preparations have cranked up to fifth gear. The Olympic Stadium is almost ready for the drama which will unfold next year.

This guide will explain everything we know so far about the new National Stadium including how you’ll be able to get there, what the stadium capacity will be, and the stadium’s history.

History of the National Tokyo Stadium

The 1964 Olympics were a momentous moment for Japan. The country has recovered quickly from the ashes of the Second World War but the games were the country’s chance to shine on the international stage. The games were a huge success and the National Stadium was the main venue.

The moment that Tokyo submitted their 2020 Olympic bid, there was talk of reconstructing the National Olympic Stadium which was such a success in the ‘64 games.

Plans for the new stadium were officially unveiled in 2012 by the Iraqi-British architect Zaha Hadid (“Queen of the Curve”). However, the ambitious plans were met with raised eyebrows and it was difficult to find a supplier willing to work with the expensive costs.

Eventually a deal was reached in 2015 with the Taisei Corporation and the Takenaka Corporation. A budget was set at 155 billion yen (approximately 1.1 billion euros) was allocated and Kengo Kuma, a leading Japanese architect, was put in charge of the project.

Although the 1964 stadium was exceptionally innovative for its time, the reconstruction would have blown the minds of the original spectators. It will be state-of-the-art stadium, nothing short of what the world has come to expect from Japan.

The best way of getting to the Tokyo Olympic Stadium will be by public transport as the traffic around the location will be very heavy. There are numerous ways of reaching the stadium.

The best way of getting there with your JR Pass is by catching the JR Sobu Line to Sendagaya Station or Shinanomachi Station (the JR Pass does not cover the private metro in Tokyo).

Read more: Getting around Tokyo

By train or metro

The Tokyo Olympic Stadium was the heart of the 2020 games. However, of all the hundreds of scheduled events, only the arrival of the torch relay for the Opening Ceremony, Closing Ceremony, football and archery will take place there.

Here are the dates of the events taking place at the Tokyo Olympic Stadium.

The Tokyo Olympic Stadium will hold a 68,089 capacity crowd during the athletics. However, for the other events, temporary seating over the athletics track will allow an increased capacity of 80,016.

The capacity for the Paralympics will be reduced to 57,750 to allow more room for accessible seating.

The construction was 90% complete in July 2019 and is set to be complete by the end of November 2019. A more detailed seating plan is expected to be released then.