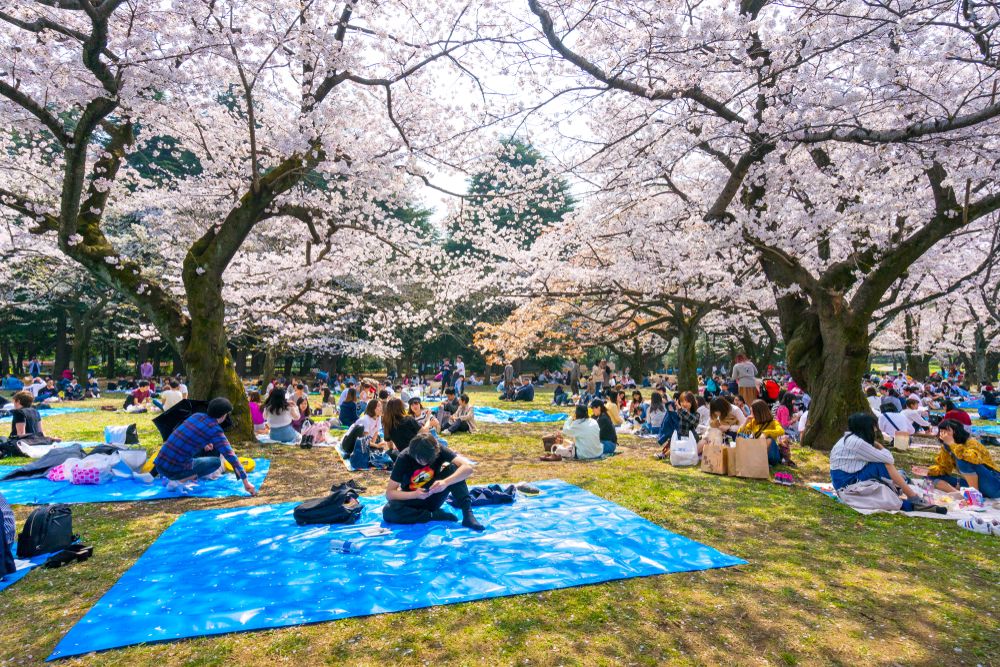 Yoyogi Park, called Yoyogi-Koen in Japanese, has been described as “one of the liveliest parks in the city.” It is also one of the largest green spaces in Tokyo. It is located conveniently between two other bucket list areas, Shibuya and Harajuku.

Festivals and other events are held there almost every weekend. Whether you’re traveling solo, in a group, as a couple, or with children, Yoyogi Park offers something for everyone.

How to get to Yoyogi Park

Because of its central location, Yoyogi Park is easily accessed from a number of Tokyo train stations. Harajuku is the closest access point.

From any of the 29 stations of the Yamanote Line, use your Japan Rail Pass to travel to Harajuku station. Alternatively, the JR Yoyogi Station offers access to the opposite side of the park. It can be reached using the Yamanote or Chuo Line.

Other options include taking the Chiyoda Subway Line to Meiji-Jingumae Station or Yoyogikoen Station, or the Odakyu Line to Yoyogi-Hachiman Station. Keep in mind, however, that your JR Pass is not accepted on non-JR train lines.

Yoyogi Park enjoys a long and rich history. It was the obvious location for any event requiring open space. In 1909, it was a military drill grounds. Around 1910, it was used as a runway for the launch of powered aircraft. Circa World War II, it was a training grounds and venue for military marches.

After the war, the park housed American officers. During the Olympic Games of 1964, it was a sporting grounds that also housed Olympic athletes, and then it officially became a park in 1967.

Yoyogi Park is 54 hectares (133 acres) of green spaces and concrete. The park itself is divided into two sections:

The festival area also houses the Yoyogi National Gymnasium, famous for its suspension roof design and Second Gymnasium. Both played a role in the 1964 Olympics and are expected to do so again for the 2020 Olympics, hosting the handball games.

Food and beverage stands are available throughout the park, providing souvenirs, sports equipment, beer, and other refreshments. There is a bicycle rental shop within the park, on the northwest side. It is open from 9 am to 4 pm, and rentals range from 100 to 210 yen per hour.

If you’re traveling with your furry family members, a fenced-in dog park is also available. Remnants of the Olympic village can be viewed, as well as a bird sanctuary. Near the Olympic housing is a “Sample Garden,” created from the seeds brought by the Olympians. A concrete walking path meanders through the grass areas of the park. A car park is available for those who wish to drive to the park.

Things to do in Yoyogi Park

Yoyogi Park offers endless opportunities for fun of all kinds. Ride a bike, go for a jog or stroll, fly a kite, toss a frisbee, play a game, or have an outdoor meal. If you enjoy the augmented reality game Pokémon Go!, you can look for rare Pokémon near the park’s fountains.

There are several dedicated cycling trails that do not allow pedestrians. One area is designated for children on bicycles.

Alternatively, you can just look around you and see what is taking place on that day. You might observe bubble-making performances, DJs spinning the latest tunes, dance troupes, theater actors, martial artists, jugglers, or live musicians. Performances may take place at the event stage or throughout the park. The entire forested area of the park can be viewed from an observation deck.

If visiting in spring, you can view the park’s cherry trees in bloom. If in fall, check out the vibrantly colored ginkgo tree grove.

Meiji Jingu Shrine can easily be reached by crossing the bridge from Harajuku Station to the park. The shrine was established in 1920 and honors Emperor Meiji, who ruled until his death in 1912.

The shrine grounds consist of about a square kilometer of inner and outer gardens. The shrine itself is located within the inner gardens. During World War II, the main shrine building was destroyed by bombing. The current building replaced it in 1958.

The shrine building complex includes a restaurant, food court, museum, and souvenir shop. Hours vary throughout the year, but the shrine is generally open between 6 am and 4 pm, and the admission is also free. You can expect to spend one to two hours exploring Meiji Jingu.

What types of events can you expect to experience in Yoyogi Park? On Sunday afternoons, for example, the Tokyo Rockabilly Club takes over the plaza near the park’s entrance. They demonstrate 1950s American Hollywood culture through their clothing, rock and roll and country music, and dance performances.

International events allow a glimpse of other cultures. The popular Thai Festival takes place several times per year, featuring Thai food and music. In April each year, there is a Cambodian festival, and Jamaican and Okinawan festivals in May. July sees a Brazilian Day and an Indonesian Festival, and a Latin American and Caribbean Festival in August. Sri Lankan, Indian, and Vietnamese festivals are held in September.

Cinco de Mayo, St. Patrick’s Day, Outdoor Day, Earth Day, and many others are also celebrated at the park. Music festivals, flea markets, and food festivals are common. Almost every weekend, some event is booked at Yoyogi Park!