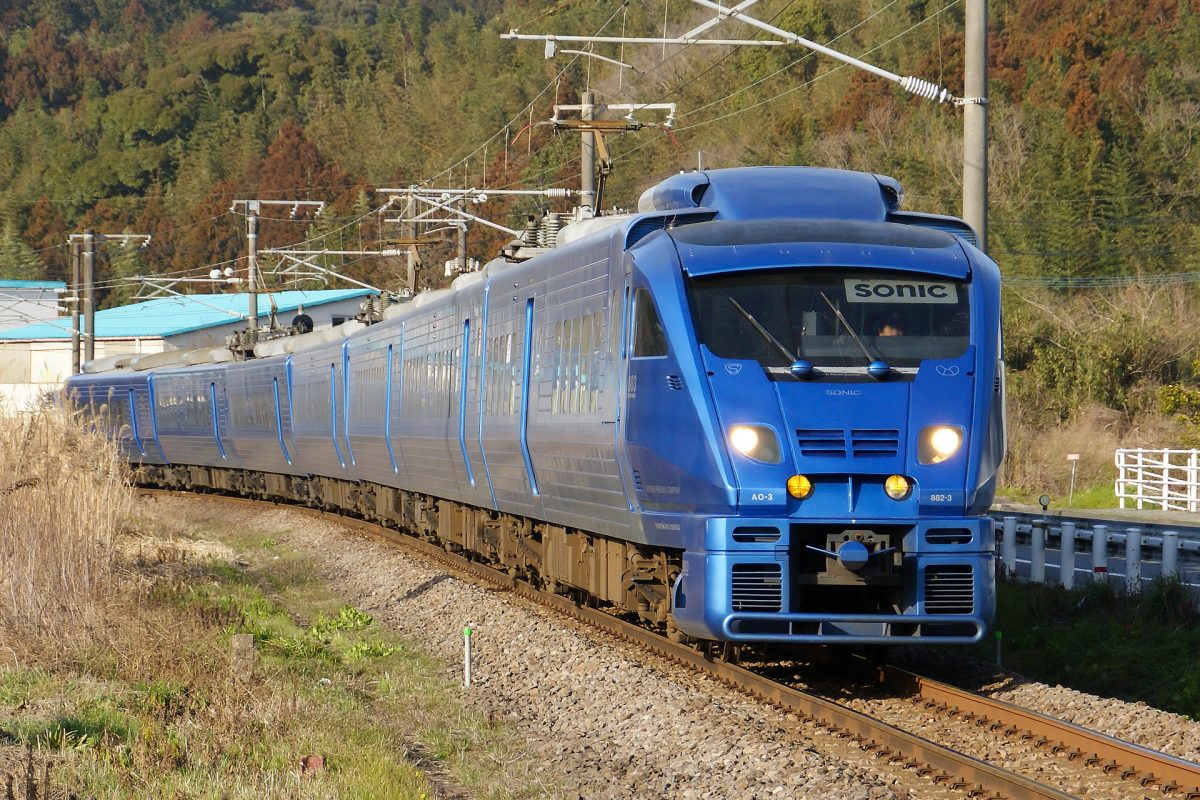 The island of Kyushu is the southernmost, as well as the most westerly, of Japan’s large, main islands. Kyushu is home to mountainous terrain, including the most active volcano in Japan, known as Mount Aso.

The subtropical climate of Kyushu makes it an ideal location for vacationers. Few sights evoke as much awe as the view from a train winding through Kyushu’s countryside, steam floating lazily atop nearby hot springs. The island is also a valuable resource for understanding Japanese culture, as it is famous for its art and its silk.

If you are looking for a unique way to explore this island, consider the Limited Express Sonic train, accessible using your Japan Rail Pass. The JR Kyushu Railway Company’s Limited Express Sonic 883 Series trains are built for both comfort and speed, and have been described as the “East Kyushu intercity urban express that is true to its ‘Sonic’ name.”

Itinerary and destinations of the Sonic Train

The Limited Express Sonic makes several stops throughout the island of Kyushu. Access to this train begins at Hakata Station in Fukuoka. This station also connects with the Sanyo Shinkansen – linked to the main island of Honshu by undersea tunnels – and Kyushu Shinkansen lines.

After a two-hour train ride, the first stop is at Beppu Station in the coastal town of the same name. In Beppu, you can relax in numerous onsen, or hot springs. In fact, Beppu has been called the “hot spring capital” of Japan due to an excess of 2,500 hot springs. The Takegawara Hot Springs of the Beppu Hot Springs Resort is a much sought after destination. In addition to the traditional onsen experience, this resort also offers geothermally heated sand baths.

Visitors also marvel at the hot springs known as the “Eight Hells,” or jigoku. These hot springs sport beautiful and intriguing colors in their waters, ranging from the cobalt blue of the Umi-jigoku or “Sea Hell,” and the boiling hot muds of the Yama-jigoku and Oniishibozu, to the blood-red waters and crimson steam of the Chinoike-jigoku, or “Blood Pond Hell.”

Unlike most onsen, the Hells are far too hot to enter, but a few offer foot baths nearby. In fact, the waters of the “Cooking Pot Hell” are sometimes used to boil eggs or vegetables. To reach the Hells from Beppu Station, you will take Kamei Bus 5, 7, or 9 to the Kannawa bus terminal, a fifteen-minute ride. Two of the Hells require an additional bus ride, totaling forty minutes from the station.

The Sonic train line ends in Oita, the capital city of its prefecture. Oita is home to castle ruins as well as houses of modern Japanese culture, including the Bunkakaikan or Oita Cultural Hall, the Otonoizumi Hall, and Grand Theater. These locations are used for stage plays, events, and musical concerts.

When you board the metallic blue train marked on the front with an “S” for “Sonic” – styled similarly to the classic Superman emblem – you are in for a ride that includes speed, comfort, and a beautiful view.

As you enter the train, you are greeted by sleek and modern décor – embossed aluminum flooring and vividly colored, metallic walls. You may then relax in the cozy atmosphere within the car, provided by the hardwood flooring and seats sporting leather headrests. Seats are also equipped with small folding lap tables.

For added comfort, this train employs a unique tilting mechanism that reduces the passenger’s experience of centrifugal forces when rounding a curve, providing a smooth and seamless ride.

Benefits of the Green Pass for the Sonic Train

While the Express Sonic is available to all JR Pass holders, JR Green Car Pass holders are in for an extra special treat. The Green Car offers amenities comparable to first class seating, including more comfortable seats and extra leg room. Headrests are made from genuine leather, and the chairs ar equipped with electronic reclining controls.

The Green Car’s Panorama Cabin also allows for a panoramic view of the surrounding countryside, complete with a table and rounded bench seat. The view of steam rising from hundreds of buildings throughout Beppu is a sight not to be missed. Beppu’s skyline is placed second among the 100 Landscapes of Japan to be Preserved for the 21st Century.

Whether you ride in standard class or in the Green Car, whether you relax at Beppu’s resorts or brave the Eight Hells, your Express Sonic journey through eastern Kyushu is certain to be a memorable trip.