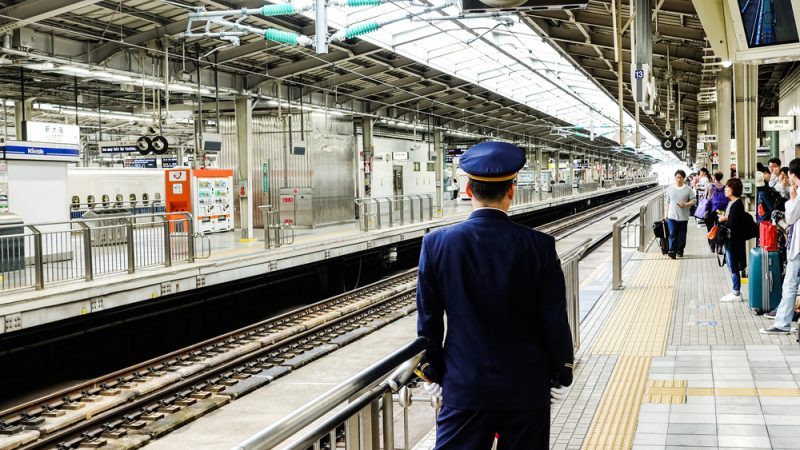 Train etiquette in Japan is something that Japanese people usually take very seriously. Trains in Japan are extremely punctual and are one of the most efficient and convenient means of transport, so it is one of the most used, especially in large cities. Most of the time we board a train, we will be sharing it with other passengers.

Millions of people use Japan’s train system each day. While navigating the train network can seem daunting, these etiquette tips will help make your trip a pleasant one.

Eating and drinking on Japanese trains

Eating in public or while walking is not a common practice in Japan. You should eat on trains only when taking a long-distance train, such as the Shinkansen. These types of trains have a tray and cup holder at every seat, and snacks are sold from a vendor trolley. When taking this type of train, it is also acceptable to bring your own food. Ekiben, sold at many train stations, is a popular option. Avoid foods with strong odors that might offend others.

You may bring water on local trains, but avoid other drink types, including soda and coffee.

Many people use their mobile phones while on the train. However, you should be cognizant that your phone use does not disturb others. Never talk on your phone while on the train, unless using the designated phone area of the shinkansen. Silence and use headphones so that your media cannot be heard by others.

Finally, turn your phone off if sitting near the priority seating area. This is done to reduce the device’s potential interference with pacemakers used by the elderly.

While you may be accustomed to chatting with your traveling companions while using public transportation, this is not the norm in Japan. Loud chatter or other disturbance is considered rude. You may notice that most Japanese train passengers stand or sit in silence. If you must converse, try to do so quietly.

Speak to the train driver only in emergency situations.

In Japan, a number of seats near the door are marked as “priority seating.” They may have a sign or be a different color than the other seats. It is expected that these seats should be reserved for the elderly, people with disabilities, pregnant women, or those with small children. You can sit in the priority seating area if the train is not crowded, but be prepared to give up your seat to those who may need it. If all of the priority seats are filled, giving up your regular seat to someone in need is highly encouraged.

Some commuter trains have cars that are marked “for women only.” These cars allow female travelers to avoid sharing close quarters with male passengers. Obviously, male travelers should heed these signs by not boarding ladies-only cars. These cars are often marked by pink signs, and the car’s seats may also be a different color.

What if you board the wrong car by accident? Don’t exit the train. Simply move to the next car via the sliding doors.

Trains are often crowded, so don’t take up extra space with your belongings. If you are carrying luggage, place it on your lap, on the floor between your feet, or in an overhead luggage rack. Some long-distance trains have designated areas for large items such as suitcases.

Do not expect ample personal space when traveling during busy times. Trains often become standing room only, and railway employees may gently push passengers to keep them moving. If standing, you can use overhead handhold rings to steady yourself. You may literally be standing shoulder to shoulder and face to face with your fellow passengers. Some choose to wear surgical-style face masks to avoid spreading or contracting germs in such close quarters.

Queuing in line to enter the trains

Japanese train stations are known for their orderliness. One reason for this is the specific means of queuing, or lining up, at the train platform. Line up at the numbered designations, either single file or two by two. Do not push ahead or break line.

Also, look for the textured red, white, or yellow line at the edge of the platform. This line is designed to keep you safe from trains moving in and out of the station. If you are the first in line, always stay behind this line, well away from the platform edge.

As you enter the train, keep moving. Trains are often crowded, so don’t stop near the doors or in the middle of the train car. Move as far into the train as you can.

Remember to stand to one side to allow passengers to disembark before trying to enter the train.

In Japan, people are very conscious of not littering or leaving trash behind. Don’t leave anything on the train, including food wrappers or newspapers. You will find waste bins within the train station.

It is acceptable to read on the train. If you are viewing a large document such as a newspaper or a map, fold it to keep it out of other people’s faces.

When leaving the train, be polite and don’t shove. When your stop is coming up, you can begin gathering your belongings and moving toward the doors. Generally, people will move aside for you, but you can calmly say “sumimasen” (pronounced soo-me-mah-sen), meaning “excuse me,” to get their attention.