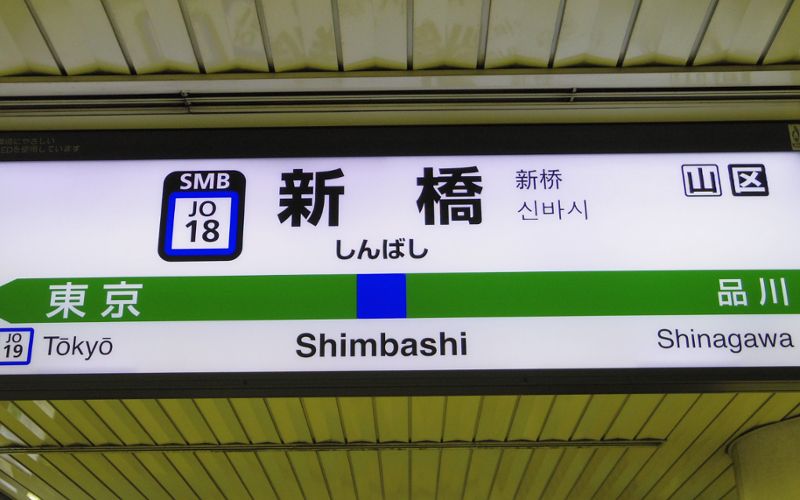 If you’ll be traveling through Tokyo’s Shimbashi Station, you can use this handy travel guide to plan your trip.

It is considered a major intersection for connections between the Yamanote and other lines.

You can use your Japan Rail Pass for easy and inexpensive travel on JR Lines. These include:

The Airport Limited Express also runs on the Toei Metro Asakusa Line. The JR Pass is not applicable to these non-JR train lines.

Shimbahi’s JR East station has three surface platforms and one underground platform. At surface level, track one serves the Tokaido Main Line, two the Ueno-Tokyo Line, three and six the Keihin-Tohoku Line, and four and five the Yamanote Line. The two tracks of the underground platform serve the Yokosuka Line.

The Tokyo Metro has two side platforms located underground, as does the Toei subway. The Yurikamome can be reached via an elevated station beside the JR East station.

The station’s East Exit opens to the Shiodome, and the West Karasumori Exit leads to bars and izakaya. Shops can be found on level B1F of the station, and coin luggage lockers are available on this level as well as level 1F.

How to get to Shimbashi Station

Shimbashi Station is located on the Yamanote Loop Line. It can, therefore, be reached easily by taking the Yamanote Line from any of the other Loop Line stations, including:

Its adjacent stations on the Yamanote Line are Hamamatsucho Station and Yurkucho Station.

Shimbashi Station is also a popular connecting station, as it serves as an intersection between the Yamanote Line, several non-JR lines, and the JR Tokaido Main Line for Atami, Hiratsuka, Odawara, and Fujisawa; the Yokosuka Line for Kamakura, Yokohama, and Yokosuka; and the Keihin-Tohoku Line for Ofuna, Yokohama, and Shinagawa.

Things to do near Shimbashi Station

There are plenty of exciting things to do in Shimbashi Station’s surrounding area. The station’s underground passageways house old-fashioned tachinomiya stand-up bars, restaurants, and cafes. More bars and izakaya, or informal taverns, can be reached outside the West Exit.

The Ginza shopping district is a ten-minute walk from Shimbashi Station. Ginza “has been the stomping grounds of the phenomenally wealthy since the early 1900s.” The district has a number of high-end shops and department stores, including Louis Vuitton, Apple, Sony, Mitsukoshi, and the Wako Department Store.

The nearby Shiodome Sio-Site was the location of Tokyo’s first railway station. Today, it is home to beautifully designed skyscrapers that house a shopping, entertainment, and dining complex. The area attracts millions of visitors each year.

You can visit Old Shimbashi Station, a reconstruction of the original station, that houses a museum commemorating the first railway in Japan. In addition to other artifacts, a piece of the original track is on display.

The Hamarikyu Gardens are a ten-minute walk from Shimbashi Station. These gardens and the surrounding smaller parks are located on the waterfront and are full of water features. Hamarikyu Gardens are laid out in the Edo Period style. It is built on the site of a seventeenth-century Shogun villa. You can enjoy traditional tea at the Pines Tea House and observe a number of historic sites.