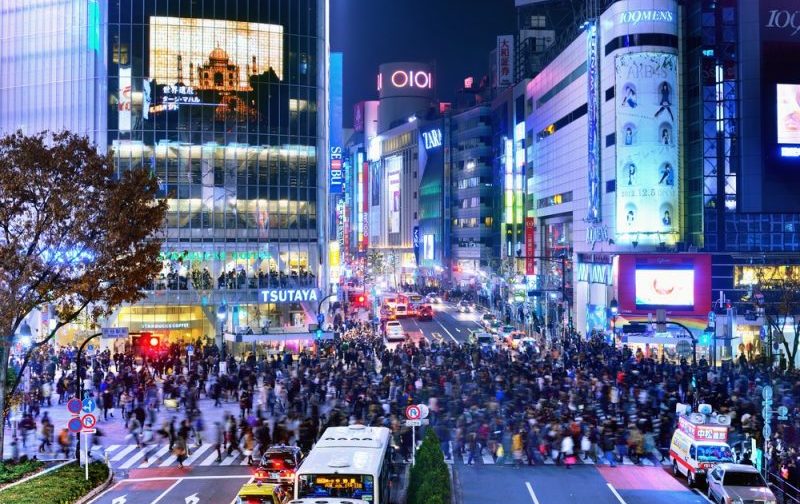 Shibuya is one of Tokyo’s 23 wards, famous for the shopping and entertainment district centered around Shibuya Station. Many of Japan’s fashion trends are born on the streets of Shibuya.

Shibuya is also a station with a long history. Shibuya Station opened in 1885 as a stop along what is now called the Yamanote Line. It was also the afternoon rendezvous of the famous dog Hachiko, now immortalized in bronze statues, film, and print.

Many of the trains served by Shibuya Station belong to the Japan Railways group and can be accessed using your Japan Rail Pass.

Remember that at the JR Travel Service Center, you will be able to activate your Japan Rail Pass and make your seat reservations.

No Shinkansen lines serve Shibuya Station directly. However, you may take the Yamanote Line to Tokyo Station. From there, you can access the Tohoku, Yamagata, Akita, Joetsu, Hokuriku, and Hokkaido Shinkansen trains.

Other lines on which you may use the JR Pass include:

Other train services using the Shibuya Station facility include:

How to get to Shibuya Station

Shibuya Station can be accessed directly from any of the main stations on the Yamanote Line. The main portion of the station has six exits. Because the station is undergoing a long term renovation plan, entrances, exits, and platforms are subject to change.

Coin operated luggage storage lockers near the west exit, the Hachiko Exit, and the Keio Line.

Things to do in Shibuya

Exiting the station on the western side through the Hachiko Exit, you will find a bronze statue of an Akita dog upon a stone platform. This is Hachiko, a symbol of loyalty and Japan’s most famous dog. Born in 1923, Hachiko awaited his master each day outside Shibuya Station. For nine years after his master’s death, Hachiko continued his daily vigil at the station at the time his owner’s train had arrived.

The intersection in front of the Hachiko Exit is in itself a landmark. Filled with neon signs, giant video screens, and a sea of pedestrians, the intersection resembles New York City’s Times Square. It is a favorite photo op for tourists, and can be seen in many films.

Located directly above the station are the twelve floors of the Tokyu department store, and next to it is the Bunkamura, a “culture village” of theaters, cinemas, a museum, and a concert hall. Connected to the station, you will find the “city within a city,” the Shibuya Mark City. This complex includes stores, restaurants, and the Shibuya Excel Hotel Tokyu.

Over a dozen major department stores featuring a wide range of styles crowd the streets around Shibuya Station. The pedestrian Center Gai is popular with young people, and is a hive of pop fashion. Supeinzaka, or “Spain Street,” is a café and boutique lined walkway leading to the Parco department store. Koen Dori, meaning “Park Street,” is another shopping street that accesses Yoyogi Park.

Where will your Tokyo travels take you? When you use your JR Pass to explore Shibuya, you are certain to have a trip to remember.