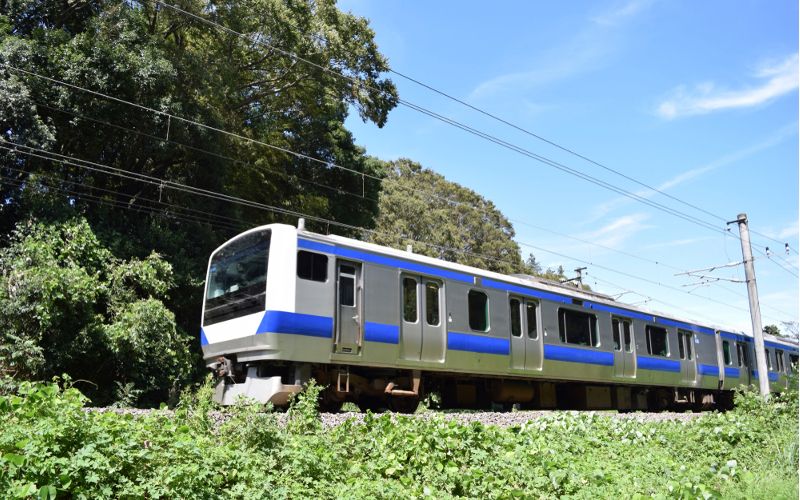 The Joban Line, or Jōban-sen, is a portion of Japan’s extensive commuter railway system, operated by the East Japan Railway Company (JR East). It connects the bustling metropolis of Tokyo with the Tohoku Region to the north. With the aid of a Japan Rail Pass, you can use this train system to quickly, easily, and affordably travel throughout Japan.

The name “Joban” is derived from combining the first syllables of Joshu and Banshu. These are the former names of the Hitachi and Iwaki provinces, which are connected by the line. The line first opened in 1889, and its construction was completed in 1905. Today, the Joban Line spans more than 228 miles or 368 kilometers.

Will you be utilizing the Joban Line on your next visit to Japan? This handy guide is here to help you make the most of your travels with the JR Pass.

Where is the Joban Line located?

The Joban Line operates within the Chiba, Ibaraki, and Fukushima Prefectures, running parallel to Japan’s Pacific coast. It links Tokyo with many other areas of interest. Major stations along the route also provide useful connections. From Tokyo Station, for example, you can reach popular cities such as Osaka and Kyoto, as well as the Narita International Airport.

There are 85 stations along the JR Joban Line and 4 on the Ueno-Tokyo Line, which links Ueno and Tokyo Stations, thus extending the services of the Joban Line.

The full station list, beginning in the Tokyo area, includes:

Most trains make stops at the major stations along their route, including Shinagawa, Ueno, Tokyo, Iwaki, and Sendai Stations. Some trains continue past Iwanuma on the Tohoku Main Line.

Travel on the Joban Line is completely covered by the JR Pass. If exiting at a Chiyoda Subway Line station, however, an additional fee may be incurred.

Many travelers begin their journey in or around the city of Tokyo. The Joban Line connects Tokyo and the Kanto region to the Tohoku region. Don’t let all the station names, listed above, intimidate you. You can use the map, below, to plan your travels.

You will notice that the line is split into sections, namely Shinagawa-Ueno-Iwaki and Iwaki-Sendai. Different types of track are used to the north and south of Iwaki Station. Rapid and Limited Express trains operate across most of the Joban Line, but a few sections are served only by local trains.

Interesting sights along the Joban Line

Tokyo, with its many diverse wards, is a major draw for vacationers. Whether you are interested in local foods, shopping, anime, cosplay, history, art, architecture, or brew, Tokyo has something for everyone.

The Tohoku region is known for its scenery – beautiful drives set alongside mountain peaks and glistening bodies of water. Tohoku is also home to onsen, traditional hot springs in which you can relax and experience a bit of traditional Japanese culture. The prefecture is also dotted with many historic shrines and temples.

The Joban Line extends through a portion of the exclusion zone which has surrounded the Fukushima Daiichi nuclear powerplant since the Tohoku earthquake and resulting tsunami of 2011. In March 2020, this section of the line was reopened, allowing a unique glimpse of this zone. Previously, buses had been used to connect these two stations.

Now that you’re equipped to use your JR Pass on the Joban Line, start planning your next adventure today.