JRailPass.com » Japan Travel Blog » Itineraries » Getting from Osaka to Hiroshima 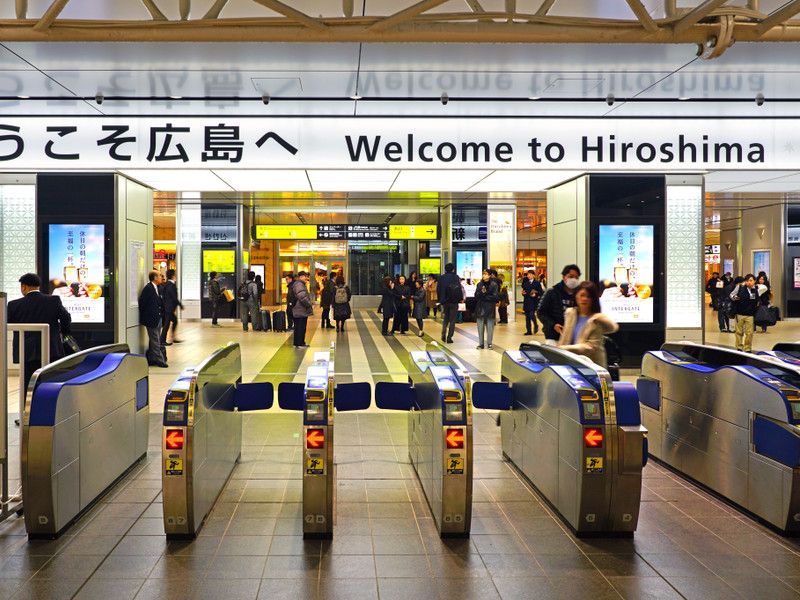 Osaka and Hiroshima are separated by a distance of fewer than 400 kilometers, or 250 miles. If traveling by train, Hiroshima can be a worthy day trip from Osaka. If you have time, however, consider spending more than just one day in this historic city. Hiroshima can also serve as a base for day trips into the surrounding area, including Miyajima.

Are you wondering how to get there? Check out this handy guide for traveling by train or by bus.

Hiroshima is an international landmark recognized as a UNESCO World Heritage Site. It is a poignant reminder of the first nuclear weapon ever unleashed on our planet. The bombing’s aftermath can still be viewed at Genbaku Atomic Dome, a structure that survived a direct hit. Other popular sites for reflection are the Hiroshima Peace Park and the Hiroshima Peace Memorial Museum.

After pondering the necessity of world peace, you may wish to connect with Hiroshima’s rich history and culture. Additional points of interest include Hiroshima Castle, the Hiroshima Art Museum, and the Shukkeien Garden. If you’re a foodie, don’t miss the city’s savory okonomiyaki pancakes, a healthy snack that is unique to the area.

Traveling in Shinkansen is the fastest and most convenient way to get to Hiroshima from Osaka, especially if you take a Japan Rail Pass.

From Shin-Osaka Station, take the Sanyo Shinkansen Line to Hiroshima Station. Nozomi and Mizuho trains make the trip in under an hour and a half but are not covered under the Japan Rail Pass.

If you would like to use your JR Pass, select the Hikari or Sakura Shinkansen instead. Sakura trains cover the distance in just over an hour and a half, while Hikari trains require about two hours and fifteen minutes.

Also, traveling in Shinkansen between Osaka and Hiroshima, you have the possibility to get on the cutest Shinkansen of all, the Hello Kitty Shinkansen!

Osaka to Hiroshima by local trains

The trip from Osaka to Hiroshima takes about six hours by local train and involves a number of transfers. The advantage of using the local trains is the reduced cost compared to the Shinkansen if you are not using a JR Pass.

Both regular and overnight buses run between Osaka and Hiroshima. Prices of the bus fare range from just over 4,500 yen to just under 6,000 yen, depending on the service chosen.

During the day, you can catch a bus at Osaka Station’s JR Express Bus Terminal. The trip will take approximately five hours. Although operated by Japan Rail, JR Express buses are not typically covered by the JR Pass.

Overnight services depart Osaka Station at 11 and 11:30 pm. The buses will arrive at Hiroshima Station between 5:30 and 6:30 am. Overnight buses allow you to rest while you travel, saving you time and the cost of overnight accommodations.

After reaching Hiroshima, you can do your sightseeing via the JR Hiroshima Sightseeing Loop Buses, also called Maple Loop Buses or Meipuru-pu. The buses follow three routes around the city, and one to three buses an hour are available on each route. The Loop Buses are covered by the JR Pass.

As noted above, Mizuho and Nozomi Shinkansen are not covered by the JR Pass. If traveling by Shinkansen, use the Sakura and Hikari trains instead. You can make the trip by local train using your JR Pass as well – simply take care to use only JR lines.

You can also use the JR Pass while traveling around Hiroshima on the Loop Bus. Visit the Hiroshima City official website to know more about the Hiroshima Loop Bus routes and timetables

What about the highway buses? Though not generally covered by the JR Pass, travelers with foreign passports can purchase Japan Bus Passes even after arrival in the country. Passes are good for three to seven days, either for Monday through Thursday use or for use any day of the week.

Are you ready for your next adventure? Grab your JR Pass and start planning your trip today.