JRailPass.com » Japan Travel Blog » Destinations » Tokyo » Tokyo Disneyland: How to get there and make the most of it 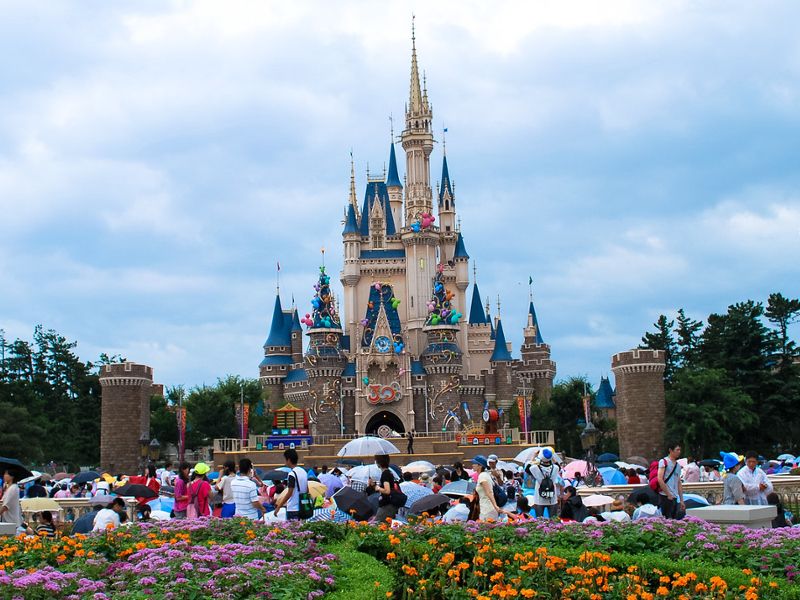 In 1983, Tokyo Disney became the first Disney theme park to open outside of the United States. It is located alongside the Tokyo Disney Resort, just a 5-minute walk from Maihama Station.

The park stretches out across 7 distinct zones and includes a range of classic Disney rides such as Space Mountain, It’s a Small World, Star Tours, and the Haunted Mansion. An ideal destination for a family day out while in Japan’s capital.

How to get to Tokyo Disneyland

From Tokyo Station, take the JR Keiyo/Musashino Line to the JR Maihama Station (the 6th stop). The train traject is about 17 minutes and covered by Japan Rail Pass. The train ticket costs 220 yen without JR Pass.

If you want to go to Tokyo Disneyland directly from Narita Airport, you can take the Tokyo Disney Resort Bus, keep in mind the last bus departs from Narita Airport terminal 1 at 06:10 p.m. The trip takes about 75 minutes and costs 1.800 yen for adults and 900 yens for child. You can buy a ticket from the bus ticket counter at the airport.

If you have a JR Pass, you can use the Narita Express form Narita Airport to Tokyo Station, a 60 minutes trip, and from there, take the JR Keiyo line, as mentioned above, and arrive at Tokyo Disneyland in another 15 minutes. The whole trip is about 75 minutes. Narita Express and the trip by Keiyo line are full covered by your JR Pass.

Alternatively, you can take the Disney Resort Monorail to Tokyo Disneyland Station.

Tickets may be purchased up to two months in advance for a fixed date, or you may buy open date tickets, good for one year from the time of purchase.

The Fastpass allows you to skip the line at a specific ride during your assigned one-hour period. You can get a Fastpass for free by inserting your Passport into a Fastpass machine, located in front of the attraction.

Opening hours vary by season, but they typically encompass the hours of 8 am to 10 pm. Admission ends one hour prior to closing. The park is open 365 days a year.

Tokyo Disney is home to seven distinct areas, including:

A mine and train-themed rollercoaster, modeled after its counterparts at Disneyland California, Disneyland Park in Paris, and Disney World in Orlando, Florida.

A global park staple that will cool you off on hot summer days.

A waterbased ride in Fantasyland, modeled after the inaugural Small World ride that premiered at the 1964 New York World’s Fair.

This ride is unique to Tokyo Disney, not found in any other Disney parks.

Are you brave enough to face the “999 happy haunts” that live there?

This 3D motion simulator ride will take you to a long time ago in a galaxy far, far away.

A futuristic rollercoaster and a staple of Disney theme parks.

To infinity and beyond! This is an interactive shooting ride based on the Toy Story franchise.

A dark ride attraction based on the 2001 film.

This wildlife-ridden, riverboat treasure has been discontinued as some other Disney parks but thrives at Tokyo Disney.

In order to select the best time to visit when the park is less crowded, avoid weekends, especially extended holiday weekends. Other busy times include national holidays and school holidays. In Japan, school holidays occur mid-March through early April, late July through August, and late December to early January.

The weather is especially pleasant in spring and fall, but these times are also the busiest.

Decorations and parade events change seasonally. A favorite is the Dreamlights Electrical Parade, which features floats and performers decked in over 600,000 LED lights. Fireworks are a frequent nighttime attraction.

In the coming years, Tokyo Disney will also host the opening of two new themed areas, based on Big Hero 6 and Beauty and the Beast.