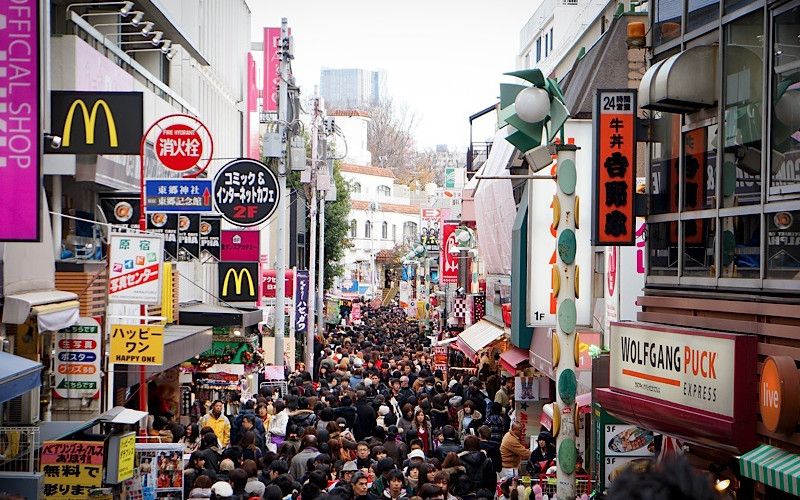 Surrounding JR Tokyo’s Harajuku Station is an area known as Harajuku. It has been called “the center of Japan’s most extreme teenage cultures and fashion styles”, and as such draws a youthful crowd from across Japan and around the world. The most prominent area of this Harajuku style is Takeshita Dori, or Takeshita Street, along with its side roads, all of which are lined with shops, restaurants, and food stands.

Harajuku is not only a land of youthful fantasy, however. It is also home to historic sites and shopping venues catering to adults. If you plan on visiting this district of Tokyo, allow the following travel guide to show you the ways in which Harajuku has something to offer for any age group.

Discover all that there is to do in and around Harajuku, from fashion to unique animal encounters. Using your Japan Rail Pass makes travel to this area of Tokyo easy and affordable.

The Japanese term kawaii can be translated as “cute,” “lovable,” or “adorable.” From Hello Kitty to Lolita fashion with its pastel colors, ribbons, and bows, kawaii fashion is just one aspect of Harajuku style. One kawaii mecca is LaForet Harajuku, a seven-floor shopping complex home to over 100 trendy shops and a museum. LaForet is designed to appeal most to girls and young female adults.

For decades, Harajuku has been the epicenter of unorthodox clothing styles. Beginning with Kawaii in the 1970s, Harajuku’s styles have grown to include gothic elements, big-name brands like American Eagle and H&M, and otaku. Vintage is also a popular aspect of Harajuku style.

Boutique Takenoko has been called “a history lesson in Harajuku style”. This store has it all, from punk fashion to Lolita kawaii. Takenoko was the go-to clothing store for many music and dance groups in the 1970s and 1980s.

Things to Do in Harajuku

Harajuku shelters a rich history that includes one of Tokyo’s most important shrines. The Meiji Jingu, or Meiji Shrine, is located in the large and verdant Yoyogi Park. Nearby you will find the Togo Shrine, a modern Shinto shrine. Art lovers will relish the ukiyo-e paintings of the Ota Memorial Museum of art and the Asian art collection at the Nezu Museum. The latter also cultivates a traditional Japanese garden. The NHK Studio Park offers visitors a behind the scenes look at television broadcasting.

The most prominent area of teenage culture is Takeshita Dori, or Takeshita Street, along with its side roads, all of which are lined with shops, restaurants, and food stands. To the south is the larger Omotesando, a tree-lined shopping avenue aimed at adults in their thirties and forties. It is also home to the Kiddy Land toy store. In Omotesando, you can find Tokyu Plaza, an iconic shopping-center, a building designed by the architect Hiroshi Nakamura.

The Oriental Bazaar is one of Tokyo’s most inclusive souvenir shops, featuring kimonos, samurai swords, and more. Daiso Harajuku delivers discount clothing, kitchen items, stationery, and food. Find vintage eyewear at Solakzade, or get hands-on with a hedgehog when you pick up a coffee at Harry’s Harajuku. Harry’s is a spin on the recent popularity surge of animal and owl cafes – yes, cafes that house and allow you to interact with real, live owls! The Fukuro no Sato owl cafe is located just outside Harajuku Station. There, you can sample “Nest Beer” alongside your feathered friends.

The JR Harajuku Station is unique in appearance, resembling an alpine European style. This small station houses a single island between two tracks. Harajuku Station is served by the JR Yamanote line, (you can reach it for free with your JR Pass!) and it is adjacent to a station serving the Tokyo Metro and Fukutoshin train lines.

At the southern end of the station, on Omotesando Street, we can find the main entrance, next to the access to the Meiji-Jingumae station of the Tokyo Metro line. From Takeshita Street, we can also access, through a smaller entrance, the central platform.

The reconstruction of the station is scheduled and is expected to be completed in time for the Tokyo 2020 Olympic Games.

Many of Harajuku’s attractions are located within walking distance of Harajuku Station. For those that are not, a subway is available nearby.

Where will your adventures take you? Discovery Tokyo and beyond with the help of your JR Pass.