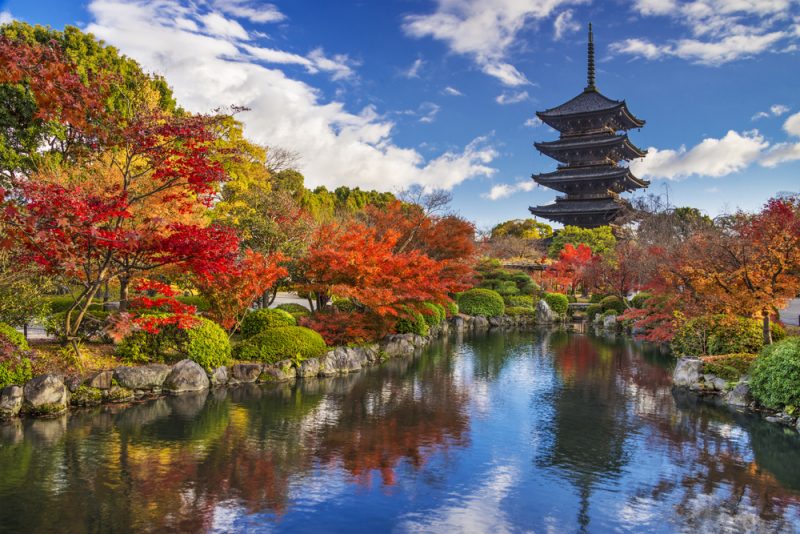 Kyoto is a city steeped in history. It is home to 17 of the 22 UNESCO World Heritage Sites declared in Japan. Entering certain areas of this modern city is like stepping back in time.

Toji Temple is one of those sites. It is home to a the tallest wooden pagoda in Japan. Its name means “East Temple” in Japanese, and it was founded in 796. At one time there was also a “West Temple,” called Saiji, but today only its sister, Toji, remains.

In spring, the temple grounds are a favored spot for viewing cherry blossoms, including a huge, photo-worthy weeping cherry. Check out this travel guide to see all that Toji Temple has to offer.

The Toji Temple was founded during Japan’s Heian Period, after the nation’s capital was moved to Kyoto in the 700s. Along with its sister temple, the Kyoogokuji, as it was then called, stood at the gates of the Heian capital. Its original name meant “The Temple for the Defense of the Nation by Means of the King of Doctrines.”

Thirty years later, the founder of the Shingon sect of Japanese Buddhism, Kobo Daishi, became the temple’s head priest. This made Toji one of the most important temples to Shingon Buddhism, second only to the sect’s headquarters on Mount Koya. Many of the buildings still standing on the temple grounds were added under Daishi’s oversight.

Today, Toji Temple is ranked among the many UNESCO World Heritage Sites declared in Japan in Kyoto.

The Kondo Hall is the temple’s main hall and its largest building. The original structure was destroyed in a fire in 1486, but rebuilt during the Edo Period. It houses a large wooden statue of the Yakushi or Medicine Buddha and his attendants, the Gakko and Nikko Bodhisattvas of the moon and sun. The Buddha statue dates to 1603.

Beside the Kondo Hall is the Kodo Hall. This hall was added to the grounds by Kobo Daishi in 825. It served as a lecture hall. It also burned in the fire that destroyed the Kondo Hall. It was later rebuilt in its original style. The Kodo Hall is home to 19 statues of the Dainichi Buddha, others buddhas, bodhisattvas, and guardian kings that Daishi brought from China.

Beyond these halls lies the famous five-storied pagoda, another Kobo Daishi original erected in 826 and rebuilt in 1643. This is the tallest wooden pagoda in Japan at 57 meters (187 feet). It can be spotted from various places around Kyoto, including the nearby Kyoto Tower, and it has become a symbol of the city. Its bottom story houses four small Buddha statues and is sometimes open to the public.

West of the pagoda is the Miedo or Founder’s Hall, which features a statue of Daishi himself. The Homotsukan Museum serves as the temple’s treasure house. There, you can view Buddhist statues and artifacts.

The Kobo-Ichi or Kobo-san flea market, also known as Toji Temple Flea Market, is held on the twenty-first day of each month, from the early morning until about 4:30 pm. The date honors Kobo Daishi, who died on March 21.

Vendors sell new and vintage items, clothing, kimonos, antiques, toys, food, plants, and more. A smaller market is also held on the first Sunday of each month. The market is located in the plaza and park surrounding the temple grounds.

During the cherry blossom season, night illumination is provided to light up by the temple and its garden. Pink illuminated cherry blossoms against a jet black night sky is a breathtaking sight.

The temple itself is also transformed. Its dark outer appearance gives way to gold under the illuminating lights.

How to get to Toji Temple

Also, you can also reach it in a five minute walk from the Toji Station, on the Kintetsu Kyoto Line, which is the next stop from Kyoto Station (2 minutes, 160 yen for the trip).

Toji Temple is open daily from 8 am to 5 pm. The entrance fee is generally 500 yen, but is increased to 800 yen during special openings of the pagoda.